Pierre Poilievre and the Smearing of Sheila Fraser 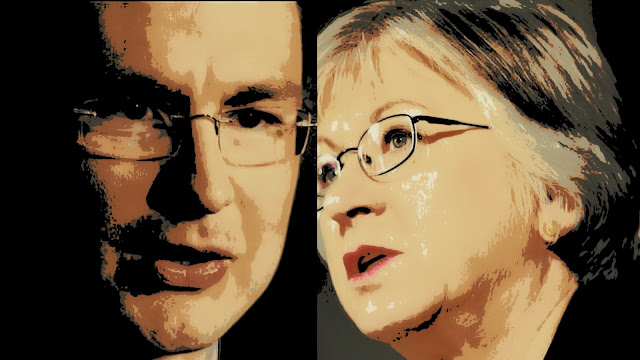 I must admit that when I saw that Pierre Poilievre was going to absurd lengths to avoid mentioning Sheila Fraser's name, at first I was amused.

I figured that the way she demolished his foul so-called Fair Elections Act, had left him in a state of shock, totally humiliated, and boiling with anger.

And that he was afraid that just allowing Fraser's name to escape his pie hole, might cause him to lose control.

And of course, that would be HORRIBLE.... 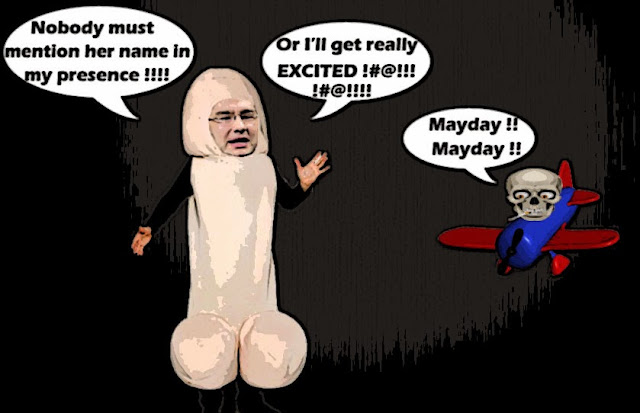 But then I noticed that not only was Poilievre avoiding her name, he was answering questions about the issues she had raised, as if No Name was working for Elections Canada.

As he did in Question Period yesterday over and over again...

Even though Sheila Fraser was not speaking for Elections Canada, she was speaking as a distinguished and highly respected Canadian. Period.

But then today I saw that the ghastly Con Tom Lukiwski was suggesting that her opinions could be bought.

In a letter sent to the committee chair on Friday, Tom Lukiwski, who also serves as parliamentary secretary to Government House Leader Peter Van Loan, avers that Chief Electoral Officer Marc Mayrand "has made a practice of hiring academics, former politicians and public servants through discretionary contracts," some of whom, he notes, "have appeared before our committee during its hearings on the Fair Elections Act."

"In the interests of transparency," he argues, "the public should know the terms of this remuneration."

For the price of some per diems, however small.

As a member of the electoral advisory board set up by Mayrand last year, Fraser does, in fact, have a contractual relationship with the agency, albeit one that, by her recently tweeted reckoning, has netted her a grand total of $2,450 to date.

Then I saw the newspaper headlines.

And how Fraser had been forced to defend her integrity. 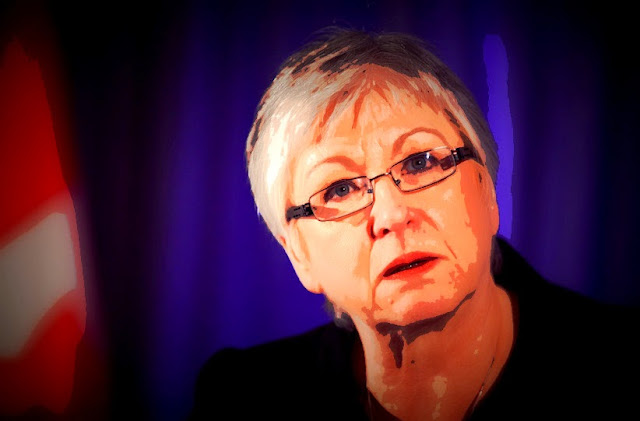 "My opinion is not for sale," she told QMI Agency.

She also rejected the notion that she is "on Election Canada's payroll," because she says her work there is very much part time.

And then I realized what I was witnessing was just another carefully orchestrated Con smear campaign.

And the thought that they would try to denigrate a decent  Canadian like Sheila Fraser, for standing up for our threatened democracy, made me sick to my stomach.

And my only consolation is that it's a fight the Cons can't win.

The first, and often the biggest, challenge for critics of a government initiative is to get the public to pay attention. Once that’s done, it’s quite a bit easier to get people to oppose a change.

The importance of Ms. Fraser’s intervention lies in her ability to a) attract attention among otherwise disengaged voters and b) draw on a remarkable level of trust that she earned through her public service.

Because most Canadians will believe her not them. She will hurt them and their foul bill.

And it does prove once again that the Cons are the filthiest beasts and bullies this country has ever seen.

For lest we forget, this is Tom Lukiwski...

A classless scumbag if ever there was one.

These are just a few of the many sordid episodes in the shabby career of Pierre Poilievre.

There was the “f--- you guys” in the heat of a committee meeting in 2006; in 2009, he was accused of having insensitively used the term “tar baby” in the House of Commons.

In 2010, Poilievre allegedly got impatient waiting at a Parliament Hill checkpoint and pressed a button to open the security gate and drove his car through without being identified and without having his vehicle inspected. He later apologized.

More recently, he suggested that “the root causes of terrorism is terrorists.” A deep thinker, Skippy is.

Who works for the scuzzy Con mob that is always trying to steal the pensions of seniors and veterans.

And who of course, like all the others, would do ANYTHING for his depraved leader.

Who raised them all to be like him, and wallow in their own excrement.

Or try to ride it to victory like he does... 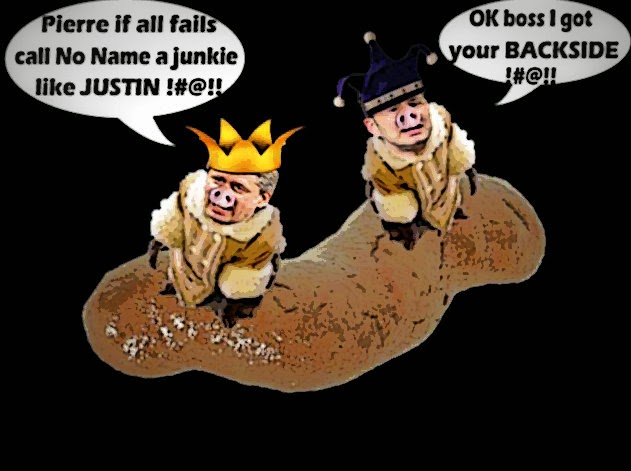 And if anyone still wonders why I portray him so crudely, hopefully after today they will understand that it's because he deserves it. That is who he is.

Until the happy day we flush him and his filthy gang down the toilet of history.

It's astounding how low our Dear Leader will go to steal the next election. If they ram this through parliament as is, our morally bankrupt leader will have gained an unfair advantage in the next election and his vendetta against Elections Canada will be complete. He must think we're pretty dumb not to see the ends to his means but we do.
Stephen Harper is the most vilest, corrupt, hateful, vindictive, petty, and opportunistic SOB that's ever been PM. Whatever it takes, he has to go in 2015, hopefully sooner.
JohnAnon

And all the whining in the world on these blogs will do nothing to stop him. I agree with Thwap. If we don't act, all this will only get much worse in the next 4 years!

I detest, detest, detest that prick Pollievre! He's rotten to the core and I can't even stand to look at his face! Please keep on portraying him crudely. It assuages my inner frustration to read your stuff! He must think so highly of himself to think that he's above waiting for a security gate to open! His day will come at the polling station. But what does he care anyways, with that fat pension of his.

Harper hasn't finished his evil mission on Canada quite yet. I consider Harper a fascist dictator who, will use every vile tactic in the book to stay in office. Poilievre is Herr Harper's Himmler who can spout off his lunacy of, the *Fair* Election Plan and not be, the least bit ashamed of himself. Even other countries say, this so called Fair* Election Plan is far from fair. Millions of people can't be wrong.

And as we see? Harper's propaganda machine are doing their best to discredit Sheila Fraser. Sheila does not to fly around the country for free as Politicians do. Sheila's expenses come out of her salary. Our tax dollars do pay Sheila's salary, I consider my tax dollars well spent paying Sheila. This is all aboveboard, honest and up front, unlike Harper and his rabble.

To call Elections Canada to inquire why they are delaying the report on robocalls, dial toll-free:

You must wonder what they are complaining about. I hear'd its 200 bucks a meeting for her expert professional opinion. The only example I can think of this government has money spent.

if the prick Pollievre, is saying it, it might just well be a lie. The skull has a cute little airplane. Will they be available for Christmas presents this year?

Phoning any number just won't help. Best to write your Con. M.P.s and ask them.

It's now very clear that the Unfair Elections Act is not only skewed in favour of the ReformaCons but it's also a direct attack on Elections Canada.
A majority Harper government is turning out to be exactly the disaster to Canada that we all knew was coming.