Stephen Harper and the Eve of Destruction 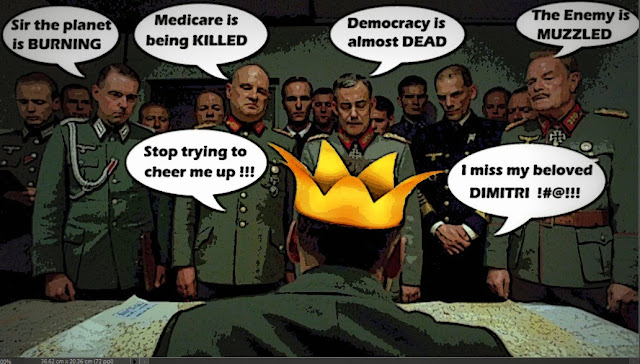 Well I can only imagine him today, huddled in his bunker with his closest advisers. The shrinking band of PMO fanatics he still trusts.

Lamenting the fate of his faithful Dimitri.

While suggesting for public consumption, that he was the one who fired him.

Prime Minister Stephen Harper personally demanded the resignation of Dimitri Soudas as executive director of the Conservative Party of Canada on Sunday after he was informed that Soudas had used party resources to boost his fiancée’s bid to win a contested nomination race, the Star has learned.

Conveniently trying to forget that he was the one who hired him.

And no doubt desperately trying to ignore that the only reason he agreed to let Dimitri go, was because he was facing a Con revolt.

And that this latest sordid scandal is just the latest example of Harper's appallingly bad judgement.

Which in this case had Dimitri claiming he was a fool for love... 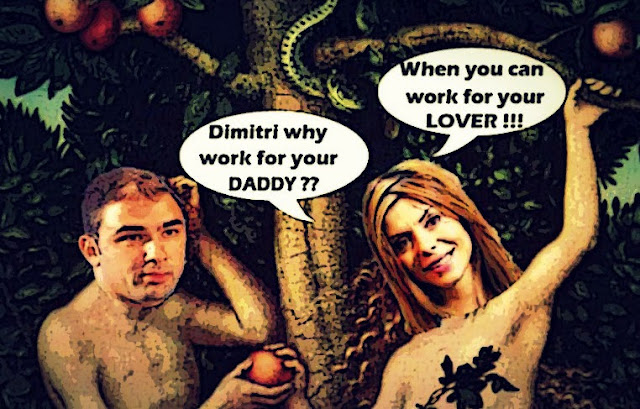 “I met the woman who I truly loved,” he told CTV’s Ottawa Bureau Chief Robert Fife. “I couldn’t hold back...”

Soudas told CTV that he had stepped in to help Adams after she suffered a concussion in a bad fall. But he also said that he had let the prime minister down, adding that Harper was like a father to him.

And had Charlie Angus comparing the Soudas debacle to a new version of the old song Eve of Destruction.

"What's going on with this prime minister's judgment when yet another insider goes down to the 'eve' of destruction?" said NDP ethics critic Charlie Angus.

Because of course Charlie's right eh? It is another harbinger of the coming Con Apocalypse.

And as John Ivison points out, the damage has been done.

When the news that Dimitri Soudas had been fired as executive director of the Conservative Party broke Sunday evening, I wrote on Twitter that all empires start to decline at the inflection point where loyalty outweighs merit.

But that’s not quite right. On reflection, it would be more accurate to say decline started to set in when loyalty began to outweigh character in the Conservative Party’s hiring policy. The Prime Minister has a bad habit of giving big jobs to people who are willing to bend the rules to get what they want.

He's made his party look bush league, stuck a spoke in its election preparations, and put a giant dent in his own reputation.

The third, and perhaps most lasting, consequence is the damage to the Prime Minister’s reputation. He has repeatedly appointed people who cannot be trusted to play by the rules. Mr. Harper has just returned from a triumphant European trip to find the headlines dominated by fratricide within his own party. But he insisted on Mr. Soudas, so he doesn’t have to look far for someone to blame.

Which must no doubt have some Cons wondering whether their Great Leader is losing his mojo and/or his marbles.

Or as Chantale Hébert suggests, wonder whether he is losing his desire to be Prime Minister.

Or the King of Canada. 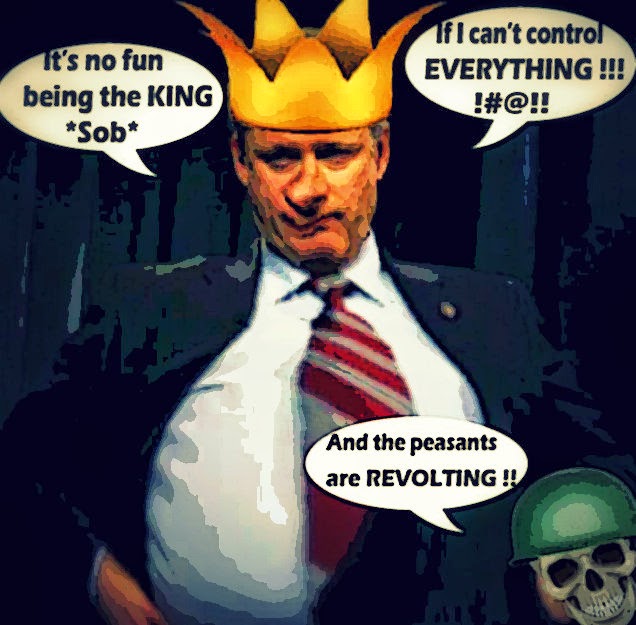 That Harper is more isolated and less in control today than a year ago is not in doubt. Consistently mediocre poll results; heightened caucus unrest; public cabinet squabbles; a poorly handled Senate scandal and what has turned out to be a bad hire for the top party job indicate as much.

A more interesting question is whether, after a decade at the helm, the Conservative leader is inexorably becoming detached/distracted from the business of running the party and the country.

Which can only make some Cons like Jason Kenney, all the more eager to replace him... 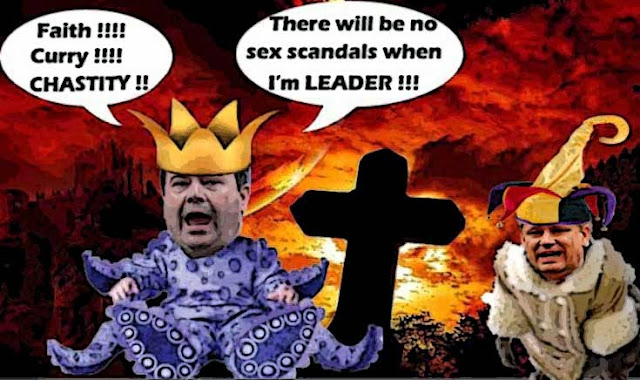 And further divide the party, in the lead up to the next election.

Give Great Leader a pair of jackboots.

And he can add this one to his collection...

Oh sure the words are slightly dated. And Harper does like war.

But he is crazy desperate, the revolt is beginning.

And his Day of Destruction is coming...

It is so sweet seeing our Dear Leader squirm from yet another scandal brought on by his appalling lack of judgement. I don't know how you keep up with it all Simon but I'm very grateful that you do. People deserve to know how this corrupt bunch are destroying this great country, from the land and seas to our most cherished democratic institutions. Your blogs have been an eye opener and have inspired the following verses:
Look around you Dear Leader as your empire slowly crumbles, there's no one left to blame.
Go to your magic mirror, and it will show you the source of your shame.

The valuation of loyalty above character, competence and merit is a hallmark of the fascist ideology.

Funny..when I first heard this news, I imagined an all-Canadian satirical version of that much-abused Hitler movie bit...with of course Harpo at the helm..
I noticed how he basked in the attentions of the media while in Europe playing up his 'relationship' with Angela Merkel et al...and it made me sick..every time he said Canada this or Canada that I worried that all those leaders would believe that was the way that Canadians felt, when nothing could be further from the truth..and then he comes home to find that his latest flack-catcher has thrown himself on the sword for 'love'..let's see how long Eve casts her flirtatious eye on ol' Dimitri, now that he's fallen out of favour..do I detect another Belinda Stronach/Peter McKay scenario? You bet I do...oh, those love-sick Cons.... and Fearless Leader is getting his political toes crushed left and right by his own sycophants..Dr. Scholls can't help you now, Steve...

I don't know Simon? I firmly believe, Harper picks his persons for specific purposes. Number one, he has to be able to control them. How can these people, be of Harper's poor judgement?

Harper chose all of those people because of, his poor judgement? I could never make myself believe that. I still can't.

Eat your next door neighbor but don't forget to say grace.
Muhahahaha

hi anon...yes isn't it sweet? It seems that no sooner has the mad King Harper recovered from one scandal, than he is felled by another. Kersplat !#@!!!. As for keeping up with all these scandals, it is getting harder and harder because there are so many. But I do try to keep up even if it means sacrificing quite a bit of the free time I have available. I suppose I could just write a few lines, and add a graphic like so many bloggers do these days.
But to me that's not blogging, it's tweeting, and focusing on one tree at a time gives people no idea of the size of the forest. So I'll just keep on doing what I'm doing until he is defeated or I collapse. And your encouragement and your poem are just great. Although I have to say that I doubt King Harper would dare look into a magic mirror these days. For at the sight of him and his record the mirror would probably shatter... ;)

hi anonymous...yes you're right, for Harper and his political thugs the end justifies the means. They may not be wearing armbands but their methods are heading in the same direction. But then you have to remember the Cons aren't fishing in a very big pond of talent. So they're stuck with many a bottom feeder that wouldn't be wanted in any decent party. And since I have come to believe that the end justifies the means when dealing with Cons. I say we drain the pond and watch them flounder...

hi mizdarlin...yes it does beg for someone to put it all into a very big opera or Broadway production. And I have to say that Dimitri and Eve are the best Con couple since Pierre Poilievre and Jenni Byrne. Honk.Honk. But of course even a Broadway show needs a beginning, a middle and an end. So I'm going to have to wait until the Final Collapse, or Gotterdammerung, before I start writing my version... ;)

hi anon...I think we can make matters clearer by calling it criminally bad judgment. He chooses the wrong people for all the wrong reasons, but there is method to the madness. He favours those who as as Ivison says, are willing to bend the rules. However, when historians write the definitive account of this tragic era, I think they will say that his poor judgement in thinking that he could get away with it landed the whole lot of them in jail... ;)

Just another example of Stevie's poor judgement. Lets see, we had the senate anointees, we had that judge, etc. and now this guy. Like what type of a political idiot would do what he did. Love???? More like the double income and a nice pension.

One of the ways some families figure out their elders have dementia is, their lack of sound judgement. Perhaps what we are seeing are the first stages of some mental impairment, just not being a total idiot.

All of this Stevie harper stuff is highly entertaining. Thank goodness you blog Simon. You are oh so more entertaining that what is one t.v. Loved the Skull!

Can't wait for the debut on p&p CBC
It'll be
Rosemary's baby
That's terrible. I should fuck off