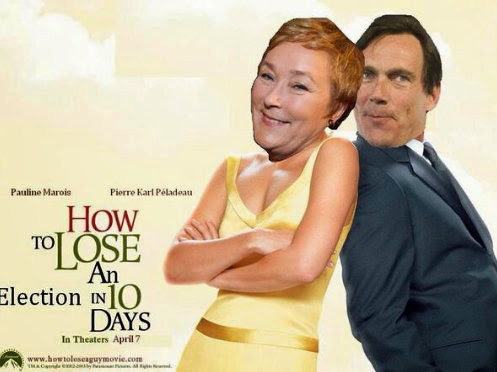 I only wrote one post about the Quebec election, because I knew that Pauline Marois' hideous version of the Parti Québécois was going to lose, from the moment she embraced Pierre Karl Péladeau.

And he raised his fist in the air and with a crazed look on his face demanded a country. Even though polls showed that an overwhelming majority of Quebecers didn't want another referendum.

And would make absolutely sure that the PQ couldn't hold one.

But who knew that the Concrete Lady would hit the ground so hard?

Pauline Marois’s tenure as the first female premier of Quebec was short-lived. After only 18 months in office, her minority government was ousted in no uncertain terms. She even lost her own riding of Charlevoix-Côte-de-Beaupré – and announced she is quitting politics after a seven-year stint as party leader.

And the even better news is that she isn't the only loser. So are a whole generation of increasingly right-wing separatists.

Quebecers put the dream of an aging cohort of sovereigntist baby boomers on indefinite and — perhaps — permanent hold on Monday. In the process, they have inflicted a life-threatening defeat on the Parti Québécois.

And even better still, so is Stephen Harper... 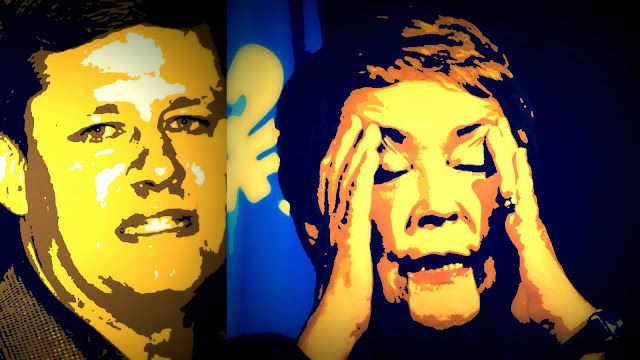 Because I don't believe this for a minute.

After Philippe Couillard, the next Liberal premier of Quebec, the happiest man in Canada Monday night had to be Prime Minister Stephen Harper.

Make no mistake, a victorious PQ would have held a referendum, and it would have counted on Mr. Harper’s unpopularity in Quebec to help the party win it. Mr. Harper would have been confronted with the hardest test of any prime minister: holding the country together.

I believe it's the product of the kind of blind conventional thinking, that has left us living in a country where even our democracy is threatened.

The refusal or inability to understand that Stephen Harper is NOT a Prime Minister like any other... 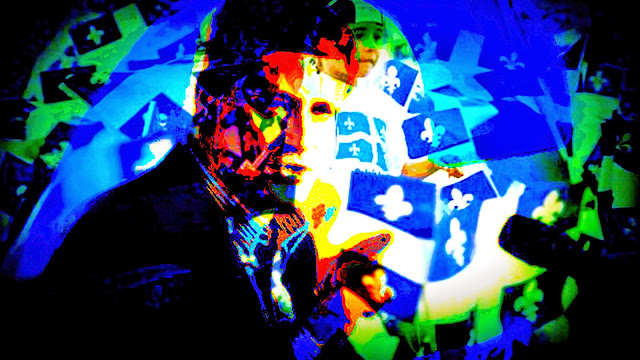 Because I haven't the slightest doubt that if push came to shove, and he was desperate enough, Harper would put his narrow political interests before the interests of Canada.

He would have welcomed or even provoked a fight with Marois, and used it  to distract people from all his scandals, by posing as Captain Canada, making national unity the main issue of the next election.

And of course by smearing Tom Mulcair and Justin Trudeau as closet separatists, and potential traitors.

I mean does anybody seriously believe that he wouldn't have done that? 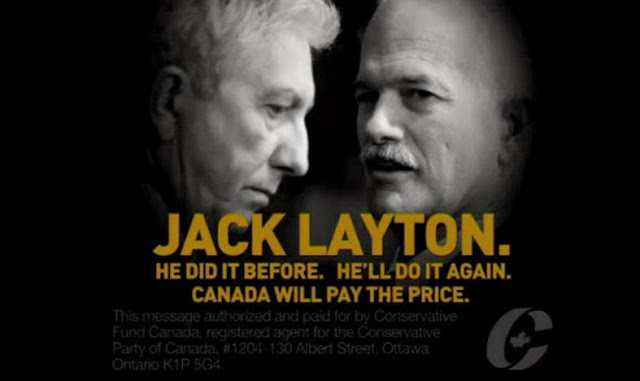 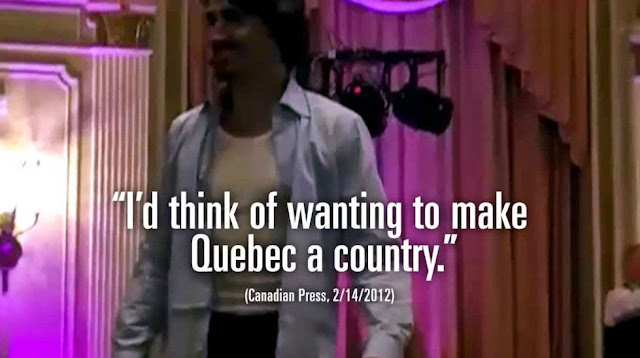 But now he can't. That weapon has been taken away from him.

Thanks to the decisive action of these amazing people who I love so much... 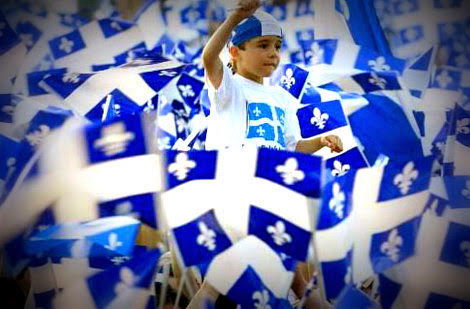 And the best news is that now that divisive issue is out of the way, we can join forces with them and concentrate on defeating the common enemy: Stephen Harper and his filthy Con regime.

Because let's not forget that NOBODY hates Harper more than Quebecers. And you need a microscope to find a Con MP in that province. Which is the way it should be everywhere.

It must have been the lowest point of our Dear Leader's tenure to have to call a Liberal and congratulate them on their victory. Looks good on you Harpo. Too bad you didn't have the class to do the same when JT won the Liberal leadership. Your utter contempt and hatred for JT because of your hatred of his father shows your true colors through and through. Let's not forgot our Dear Vile Leader wrote a news article vilifying PET 2 days after his funeral. Real classy.
Remember last night Harpo and how Pauline is now history. Your turn is coming.

I have often wondered if, in that horrifying head, was the thought that if Quebec wasn't there maybe he could be king of Canada. No going to happen. Yeah!

Harper would have been happier than Justin Trudeau or Tom Mulcair if the PQ had won. He would have proclaimed that he is the only one who can look after Canada's interest and some stupid Canadians would have fallen for it, held their noses and voted for him again even though they would not have done so without the threat of Quebec separating.

As for the MSM claiming that Harper was the second happiest man after Couillard last night, remember that some of these so called pundits/journalists (e.g. Chris Hall, Mark Kennedy, "Con" Ivison) had previously told us what a brilliant tactician Harper was and how he had thought several moves ahead of his opponents. Yeah, right, how smart is Harper looking now that he is saddled with all these scandals? :)

I wonder is Dr Phil a real Liberal, or like Cherest a phony half con? It seems Dr Phil is all for private health care.
But for now yes we dodged a bullet because Sun works for Harper and Sun is owned by a separatist, connect the dots.

Have you not been watching Vikings, Walking Dead or Game of Thrones? Did you know the most popular TV show NCIS is produced by Lockheed Martin? The message more than ever is some people just need killin or torture and then killin. Harper has punched the big data and seen electoral gold is going after voters with violence, pomp and ceremony.

There is no doubt the War if 1812 was an existential event for Canada. These phantom limbs of history linger. Does it lie as heavy in our psyche as the civil war playing out daily in modern America? Not even close, which supports your supposition that Canada is not a nation built by combat. Therefore (thank goodness) Harper can beat us with the phantom limbs of war and royalty till the cows come home and we are not going to become Americans.

Vimy Ridge was an event that allowed Canadians greater independence, and in English Canada a nation building shared triumphal David and Goliath type experience. Of course Canadian independence was inevitable and obviously giving credit to the military is spun. However where I grew up WW1 happened yesterday. Maybe growing up in Quebec was different.

History should be a lesson. No spin, no glory, just human equations and outcomes. Hopefully the future is made of good equations

Hi Simon, I posted early this morning, but it didn't register. We must remember that Manon Massé's win is not only a win for Québec solidaire, popular associations defending poor people and feminists, but also for the LGBTQ community. Not only because Manon is very much an "out" lesbian (hope one day that will be archaic) but she has also been very much a part of the LGBTQ movement here in Québec.

I'll be writing to an old and dear friend, who lives in another Québec region now, and who was one of the founders of the Front de libération homosexuel (speaking of archaic...) and who met with Manon and other LGBTQ activists in QS after the Divers-Cité parade. He'll be thrilled.

Another interesting point is that Françoise David won handily over Louise Mailloux:

Mailloux was the candidate who was so extreme about "secularist" issues that the PQ told her to shut up (article in Le Devoir, unfortunately behind subscription wall, but I read it at the library).

I have never understood why separatists weren't labelled right-wingers in the rest of the country; no, all those who would support a referendum must be lefties and terrorists!
But now that this weapon has been removed from Harper's shrinking arsenal, what will he do?
I',m sure it will be a concerted attack on Junior, which helps Mulcair to come up the middle, so for now, I am satisfied..

im glad she is leaving politics, marois was terrible. and I agree Simon, Harper was enjoying this PQ/referendum/separatist issue as it gives him time to rise in the polls and gives the media something else to chew on.

hi anon...yes I thought about that too. Especially since he must have read the story the other day when Couillard was asked how he could work with Harper, and he visibly stiffened, so horrible was the thought.
The Cons have five seats now, and they'll be lucky to keep even them in the next election....

hi anon...I'm sure that thought must cross his mind from time to time. Because if Quebec did leave the rest, and all those Liberal and NDP seats were lost, the Cons would rule Canada until the end of time. It has become fashionable to put down the Quebecois in the rest of Canada, but they are are one of the strongest bastions we have to hold off the Cons...

hi anon...I think so too, which is why I was surprised that nobody in the MSM seemed to have even considered the possibility that the election result wasn't what Harper might have wanted. He has nothing to gain in Quebec, so he very well could have played the rest of Canada against the province, and used it to win the next election. And as I said in my post, I haven't the slightest doubt that he would have used it to try to smear Trudeau and Mulcair...

hi Steve...as you pointed out I do believe that Canada is a nation that was created by our genius for compromise. There are no bloody civil wars like the one in the United States. Considering that we are a nation with many nations within it, that is a great achievement and something we should be proud about. But Herr Harper hates compromise, he'd rather make it sound like we were formed by war. When in fact the War of 1812 was a tiny war, the Battle of the Plain of Abraham even tinier. And although Vimy Ridge did contribute mightily to our identity, people should not forget that many if not most of the soldiers were fighting to prove that Canada was as British or even more British than the British. Our history is a fascinating story, but we should celebrate who we really are, and not what others would make us...

hi Lagatta...I was sorry that Québec Solidaire didn't do better, because I thought that Françoise David won both the debates I watched by a country mile. But I guess Quebecers were determined not to have a referendum, and were afraid that she might join forces with the PQ when it came to the sovereignty issue. Still, I'm glad that Manon Massé won, and that she's a LGBT person. And if I was a betting person I'd put my money on QS rather than the PQ. In fact, I'm going to go out on a limb and predict that the PQ will implode over the next few years, with its supporters going to the CAQ , QS or dare I say it, a provincial NDP. Of course if you confront me with this prediction in a few years, I will simply deny it... ;)

hi mizdarlin...the PQ was once a reasonably progressive social-democratic party but that was long ago. It was corrupted by power and its singular obsession with achieving independence by whatever legal means necessary. And this latest version was simply appalling, with its right-wing drift, the exaggeration of the threat to the French language, and the hideous, cynical, and totally unnecessary so-called Charter of Values. I strongly favour a secular society, and would support some kind of Charter, but it wouldn't look anything like that one. And depriving Harper of the chance to label Trudeau and Mulcair as separatists is an excellent development, and eliminates a very dangerous threat...