Why Pierre Poilievre's Election Bill Could Help Kill the Cons 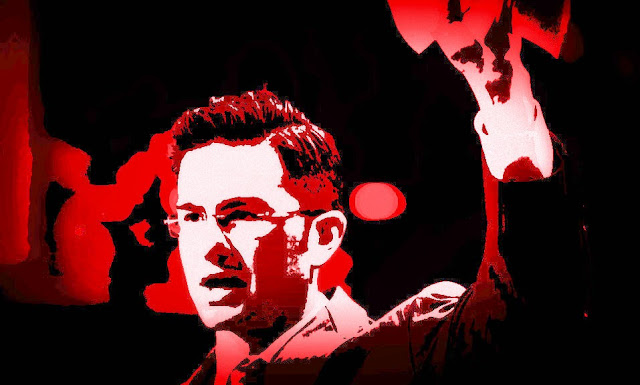 He's the most Republican looking MP I've ever seen.

A ghastly little fanatic who could just have easily have been suckled by Karl Rove as he was suckled by Stephen Harper.

And of course his foul voter suppression bill is straight out of the Republican play book, or the anus of Amerika.

But what Pierre Poilievre doesn't seem to have considered is that the bill could blow up in his face.

Or that the Cons could win the battle but lose the war.

I’m not sure whether Pierre Poilievre dreams of becoming a Republican when he grows up, but the Minister of State for Democratic Reform and his boss, Prime Minister Stephen Harper, should consider the mistakes of their U.S. brethren before ramming their flawed elections bill through Parliament.

From its patronizing title to its self-serving provisions, Mr. Poilievre’s Fair Elections Act is a Conservative version of the kind of bills Republican state legislatures have tried to pass, in some cases successfully, as a seawall against the demographic tsunami threatening their party.

Because although the bill is so Republican it might as well be whistling Dixie.

When those scummy tea baggers tried to suppress the vote in the 2012 election, it backfired badly:

The result was a colossal backlash that cost GOP nominee Mitt Romney the White House. Court injunctions prevented many of the state laws from taking effect before the election. And indignation toward Republicans seeking to disenfranchise them drove African-Americans to the polls in record numbers. Even blacks ambivalent toward President Barack Obama lined up for hours to spite the Republicans. For the first time, black turnout surpassed white turnout.

And trying the same thing here could also cost the Cons the next election.

A rabid partisan such as Mr. Poilievre may think his bill is “terrific.” But unless he radically amends C-23 – to reinstate vouching, allow for neutral poll clerks and empower regulators – the Tories will not soon live this down. They may even pay the ultimate price in 2015.

Because when you tell people they can't vote many might not take that too well. And it could spark a voter surge. 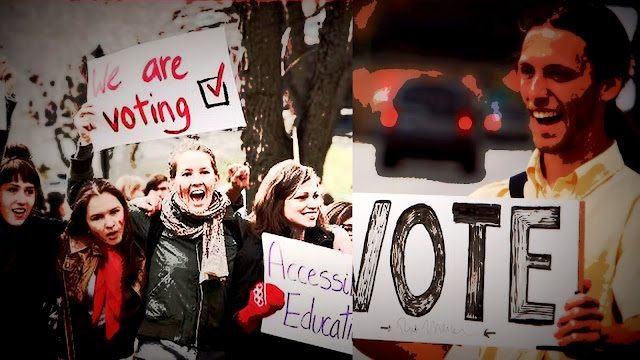 With young people, the homeless and First Nations voters at the low end of the turn-out numbers, the Harper government's crude effort to suppress their votes even more can and should be used to galvanize the vote from those communities.

While many in those communities have found little reason to go to the polls given the slim likelihood of any change in their lives, no one likes to be told what they can and can't do -- especially when it comes to rights. For the people targeted by Harper for disenfranchisement, the 2015 election could be purely about democracy itself.

And if people who don't normally vote, cast their votes for our side in record numbers, we WILL win the next election.

But of course you knew that eh?

I don't think I could have made that clearer... 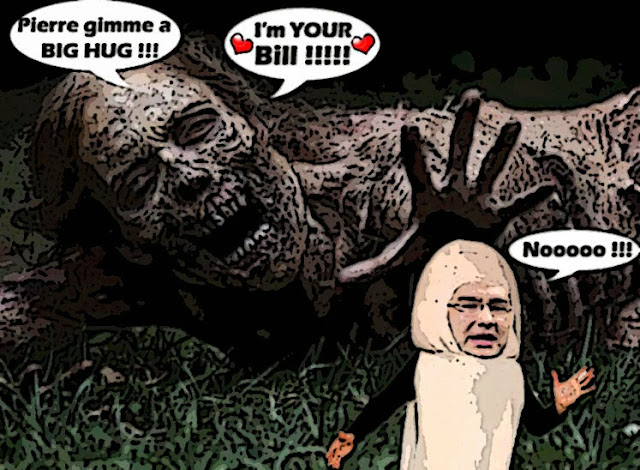 Pierre Poilievre's ghastly bill is an attempt to murder our democracy.

But he could be its first victim.

And it could help destroy them ALL...

.. its a good thing .. These so called 'Ministers' like Poilievre get saddled up and ridden and whipped like the rented partisan mules they are. And so it goes that Peter Kent abandons the Canadian Environment, MacKay falls on his face re Defense. Flaherty sells out The Canada Pension while Joe Oliver pimps for Big Oil and China.

So a smug twit named Poilievre who once upon a time owned a RoboCall company becomes the Harper Party wrangler for Democratic Reform. Right. And Canadians get the tainted minestrone of Harper ideology thats been spit in by his PMO, Tom Flanagan, Ray Novak, Jenni Byrne et al as The Fair Elections Act was brewed and stirred.

The Harper Brand is right there.. and Poilievre is a smug entitled scumbag that deserves every slimy bit of Harper Legacy that splashes on him.. Just like every other 'Minister for Harper', the ideology and legislative toxins are cheerfully delivered, complete with astounding situational ethics, mendacity and utter disregard for Canada, Canadians.. or reality

So P Poilievre can wear it.. the Harper Legacy that it.. The undeniable fact that just like all the other Ministers, he served Harper.. not Canada. Sold out.. rode for the toxic brand.. and sneered at all of us while doing so.

I have been waiting to hear someone speak to this. Remember the black voters the Republicans hate standing in line and saying ' we're not leaving until we vote'. Harper wants to appoint his sycophants as poll chair. Bullies trying to prevent us undesirables from voting could lead to calling the cops to clear the poll, general chaos and challenges to the election. Remember Slithery Steve never wins in court.

Don't get mad: get even.

Cheap, effective , grassroots campaigns could make a difference. 8x10 posters saying " Harper wants you out of his country. Fight back vote could be distributed by email, printed at home and posted in places like reservations and university residences. No budget and a loose organization but they could be effective. We need to bypass political parties and go directly to voters.

What time today (ET) does Sheila Fraser speak at the Parliamentary Committee re: Unfair Elections Act?

It will probably be seen on the CPAC channel, but the schedule is vague:


Bang on Simon. Thanks.

If people of Canada don't oppose this democratic take-down, we're really wimps of the most disgusting order.

Harper is an evil fascist dictator. He is making honest, decent Canadians lives hell. If we don't get rid of Harper? Canada will become the largest state of the Republic of, the good old USA. We should damned well, run the American Police out of Canada, Harper brought over too. Canadians didn't want them here either.

If you remember the last Federal election? Two Americans Wenzel and Parker directly participated in two Conservative campaigns in Ontario. Front Porch Strategies, were accused of the robo-calls that came out of the US.

Poilievre is one nasty piece of work, being one of Harper's henchmen. Other countries say, this so called *Fair* Election Plan is most certainly not fair, what-so-ever. How can millions of people all be wrong and Poilievre and Harper be right? This is another election fraud and the entire world knows it is.

Because Harper is so evil? What country can we call on, to save us from Harper the Hun? Perhaps we should start asking?

We must remember that in the past several elections, Harper's strategy has been to try to get opposition voters to stay home rather than vote for the Liberals (or NDP) since he knew it would be difficult to get them to support His Conservatives. He was successful in getting people not to vote for the Liberals when Stéphane Dion and Michael Ignatieff were leaders. The voter suppression act is just a formal way to keep people from voting.

I think that if a group like Leadnow can start a campaign to get people identification to vote, and encourage them actually to vote, then Harper's attempt to suppress people's voting rights will backfire.

hi salamander....I have to admit that Pierre Poilievre is now the Con minister I despise the most. Which is saying something eh? But the good news is that he is doing himself and his cause a logy of damage and he doesn't even know. And all of this will be magnified when the robocall trial begins in June. It will all come together with all the other scandals, and it will be the beginning of the end...

hi rumleyfips...I agree with you, the best way to get people to do something is to tell them they can't do it. The scenes of those black voters lining up for hours to deny the Republicans was truly inspiring. And if we can get the message out I think it could inspire young Canadian voters to do the same thing. But as you point out, we do need to get that message out. And if the political parties don't lead then let them follow. The situation is too dire for us to do nothing any longer...

hi david...According to the CBC Fraser will testify at 8 pm tomorrow...

hi island cynic...thank and you're welcome. Only punting Harper would give me more pleasure than punting Poilievre. Just the sound of his grating voice drives me bonkers. And I can't wait to see Sheila Fraser dismember his bill again...

hi Saskboy...I try not to be too harsh on our people, because you can't build a peaceful kingdom by being too rowdy. But I agree with you, when your democracy is threatened it really is time to standup for what you believe in...

hi anon...no country can save us from Harper the Hun and his evil regime. We must save ourselves. We are dealing with the most disgusting government ever, but we are more than them and if we mobilize and work together we can defeat them...

Ralph Reed schooled them. They work in the dark- with body-bags. Scum of the earth.