Stephen Harper and the Scandal at 24 Sussex Drive 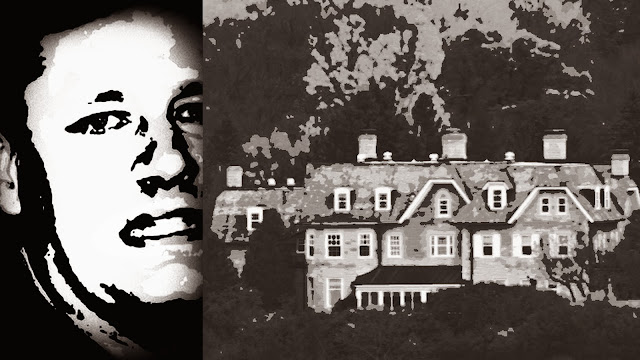 Well compared to all the other scandals he is facing this may not be the biggest.

The Ottawa Paramedic Service confirmed that it responded to a call involving an 18-year-old who suffered from “possible alcohol intoxication” at an event at 24 Sussex Drive.

But it is scandalous to see how lightly the incident is being treated, and the way the RCMP seem to be trying to protect Stephen Harper.

The legal drinking age in Ontario is 19, but the RCMP, which is responsible for security at 24 Sussex and the protection of the Prime Minister and his family, said it will not intervene.

“We are aware of the Ottawa [Emergency Medical Services] attending the residence,” said RCMP spokeswoman Lucy Shorey. “This was a medical call and not a police matter.”

When the law is the law. Alcohol poisoning is a serious condition. Binge drinking among young Canadians is a major problem.

If adults are in the home when it happens, it's THEIR problem too.

And of course the hypocrisy is nauseating... 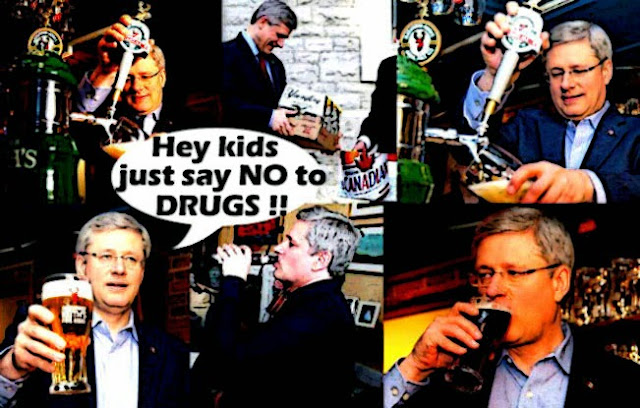 When Lord Harper is jailing ten of thousands of mostly young Canadians for the "crime" of using marijuana, a much safer drug than alcohol.

And Peter MacKay, the Minister of Justice who is charged with sending them to jail, or ruining their lives with a criminal record.

Is a poster boy for binge drinking... 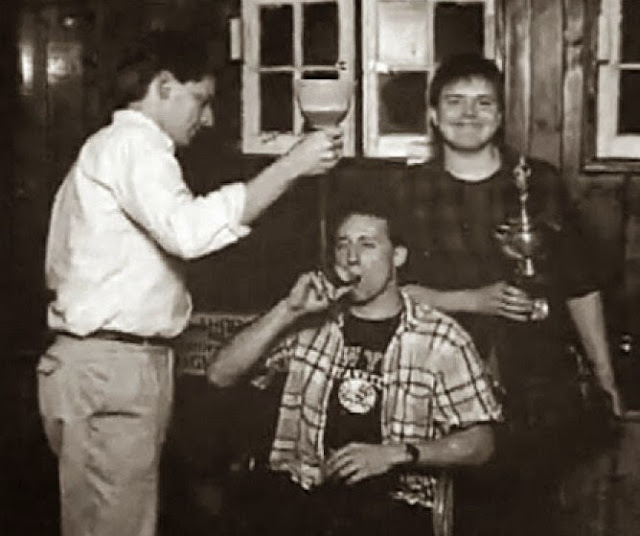 As one Globe reader points out in the comments, can you imagine how the Cons would have reacted if it had happened to one of their ENEMIES?

If this happened in Justin Trudeau's household the Cons would already have attack ads out questioning Trudeau's ability to be a good father.

But what bothers me the most is the growing feeling that the RCMP are more interested in protecting the reputation of Great Leader, than they are in enforcing the law.

To the point where some citizens have lost so much faith in the justice system, that in the case of the sordid Senate scandal, they're planning to lay charges themselves. 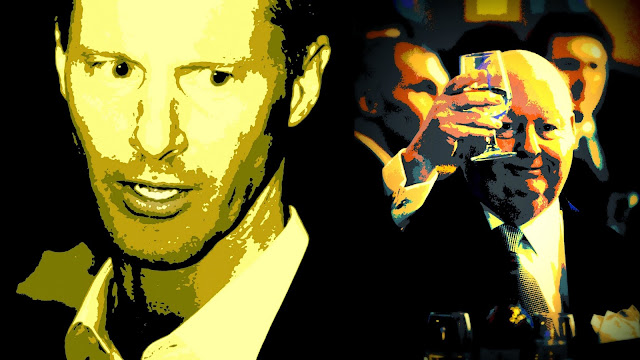 A watchdog group is considering laying a private prosecution against Nigel Wright for his secret $90,000 payment to Sen. Mike Duffy. Democracy Watch, a non-partisan advocacy group that pushes for greater accountability, says it will lay charges against Wright unless the RCMP and prosecutors do a better job of explaining why they have decided not to charge the prime minister’s former chief of staff.

For no democracy could tolerate or survive a political police. 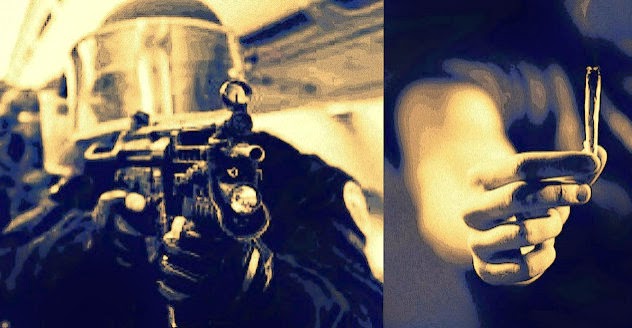 Where there is one law for the rich and powerful, and another for the rest of us.

When Lord Harper launches his next attack on marijuana and Justin Trudeau.

We can tell him to take care of his own drug problem, in his own home... 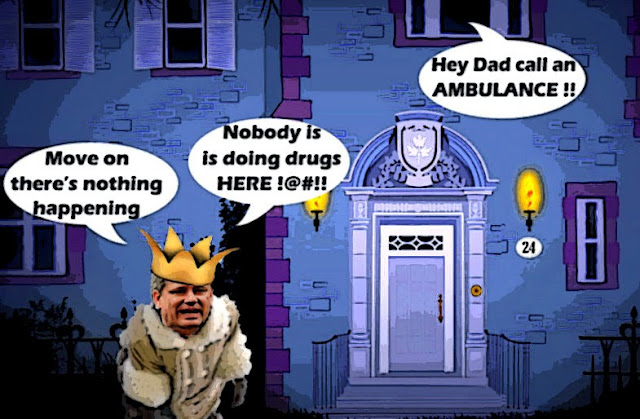 Or better still tell him to stop jailing Canadians in the name of his insane war on marijuana.

Enough of the hypocrisy.

Enough of the MADNESS... 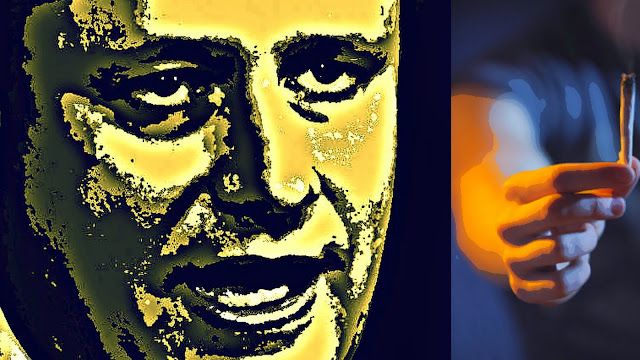 The RCMP are beyond help. They ARE a political police, and Harper is pulling its strings. Same as CSIS and CSEC. Its just a matter of time before the "suicide" rate in Canada increases overnight among the Intelligentsia.

If this happened at your house some adult member of your household could be charged with contributing to the delinquency of a minor. Ignorance of what is taking place in your basement or backyard might not be an acceptable excuse to avoid charges. You might find yourself sorting out any such claim in court after the entire community has been alerted to your stupidity.

Come on guys, we all know it was Pierre Poilievre dressed up as a little girl not some 18 year old.

Anonymous 9:21. Suicide is a way out for people who are very angry and turn this anger on themselves because there is nothing else they can do. The so called "intelligentsia" simply need to use their "intelligence" and find a solution. Suicide is never the answer and those left behind suffer enormously! I really hope that people don't start killing themselves because of Harper. There is always someone who can help. Togetherness helps. Marching with like minded people for a like minded cause helps. It fills us with a good positive energy that is much more powerful than the rotten negative energy that comes from Harper. Even commenting on a blog where like minded people gather helps. I hope that you are not one of those intelligentsia and if you are, I hope that what I have written will help you.

When I saw it on the news I could not stop laughing. I realize it is not funny when a child is found so drunk it is a hazard to their health, but on the P.M.'s temporary home. Looks good on him. So if this could happen at his kid's party how does Harper think so many other parents coping with their kids and the issues they face. .

As to the RCMP, they aren't worth the spit to put out the fire. They are controlled by Harper and aren't Canada's finest or Canada's federal police dept. They are an organization controlled by Harper and his Cons to ensure nothing untoward happens to them and they can continue with their agenda, no matter how evil. Any police force such as the RCMP which reports to one political party is sure to be of great assistance to the "ruling" party as they dismantle a democracy.

The RCMP hasn't had a commissioner who will do the job for Canadians first and politicians second, since I don't know when.

hi Ron...I hate to admit it, but it is looking more and more like that could be the case. As I said in my post, they should be really careful because if they're not and a progressive government comes to power, there will we a strong demand that the RCMP be disbanded, having been corrupted beyond repair...

hi anon 9:21...It's hard for an intelligent person to accept what is happening in Canada, and it is very depressing. But don't let them get you down, the joy of defeating them will be so amazing, it will more than make up for all that we and our poor country have suffered...

hi anon 7:46...thanks for that excellent message. I couldn't agree more. We need all the intelligent people we can get if we are to save our country. If they weren't good they wouldn't care, being depressed is only natural, but we must never give up. As I've mentioned before, I'm planning to party for at least a week when the Con regime is finally toppled, and I will not be deprived !!!! ;)

hi John...I completely agree with you. This isn't a case of some teenager vomiting all over the toilet or the carpet, alcohol poisoning is a serious condition. And if the group was underage and drinking in your house, then the adults are responsible. As they would be if they had provided the booze, and some guest had killed somebody while driving drunk. Unfortunately in this country heavy drinking is just laughed off, but I have seen the consequences all too many times, and it's not funny...

hi anon...please don't feed my twisted fantasies, or I may have to portray him in a dress to see what he looks like.... ;)

hi anon...as I told Ron, the politzei are playing with their own Gotterdammerung. I know there are some decent officers, I've met them on the job. But the force has been operating under a cloud for so long they badly need to regain the confidence of Canadians...

hi e.a.f....I must admit at first I did smile at the situation, but when I saw that the young woman had been treated for alcohol poisoning that smile quickly faded. And there was something about the way the RCMP treated the situation that really bothered me. This country and its institutions have been so corrupted by those ghastly Cons it's simply beyond belief...

Lefties getting all excited over nothing I see.

Why did the RCMP not refer this incident to C.A.S.?