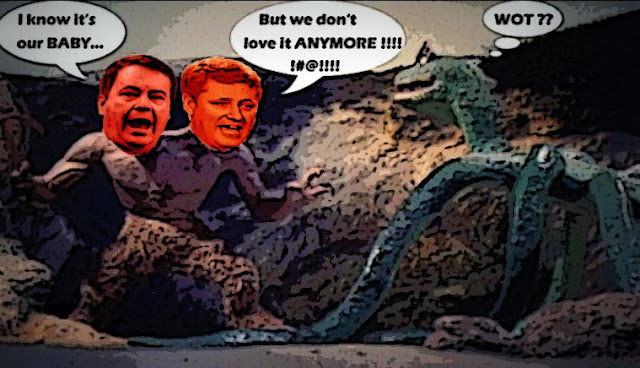 You should have seen them today in the House of Commons, like a two-headed beast attacking the foreign workers monster they created.

Stephen Harper vowing to crackdown on those who abuse the program.

"It does appear to be the case that there are some Canadian employers who believe that they can have a preference for temporary foreign workers," Harper said. "This government has been clear: That is absolutely unacceptable and it will not be tolerated."

But not the Work for Foreigners scam itself.

And Jason Kenney vowing to tighten up the program he has spend the last six years relaxing.

"We have new legislative authority … that came into effect last December that allows Service Canada to go in unannounced to work sites, to pull up their paperwork, to do the interviews and to dig down and see where there may be instances of abuse," Kenney told the House of Commons on Tuesday.

While also blaming the Liberals...

One of the many ways we've tightened the Foreign Worker Program was by shutting-down the Liberal Stripper Program: http://t.co/VAmuBhkigc
— Jason Kenney (@kenneyjason) April 29, 2014


As only a grubby pimp who serviced Canadian businesses with cheap labour for years could.

And then laughing at the Liberals when they complained...

So tonight I thought I'd better correct the record, and wipe that smile off Jasonella's face.

Before our useless MSM swallows that Con bullshit hook line and sinker.

As they are always doing.... 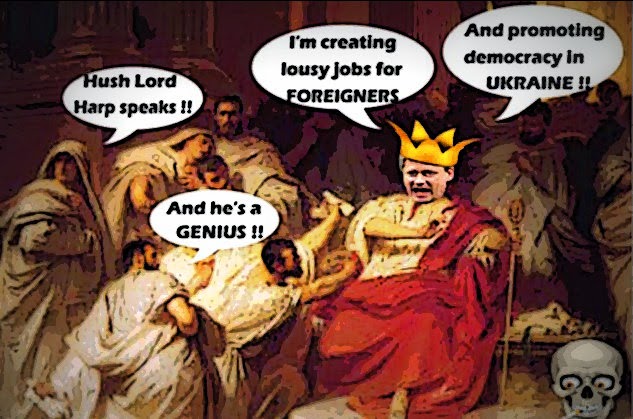 By pointing out that only a few months ago Kenney was trying to make it easier and quicker for companies to bring in slave workers.

Round 2 will speed up the so-called labour market opinion process in which federal officials determine whether to give a company the green light after it applies to hire temporary foreign workers, Kenney says.

As he has always done while facilitating, like a pimp, the greatest expansion of the program, and the greatest invasion of foreign workers this country has ever seen.

And look even MORE are coming to steal jobs from young Canadians.

Under the International Experience Canada program, as many as 20,000 workers aged 18 to 35 will soon be coming to Canada -- just as Canadian youth begin pounding the pavement in search of summer jobs.

And these are REAL slaves, just like our greedy, grubby, business class likes them:

The program allows employers to bypass the labour market opinion process, which means there's no need for government approval. As well, companies are not obliged to pay their workers the prevailing market wage.

In a country where the unemployment rate for young Canadians is twice the national average, and so many are desperate and broken... 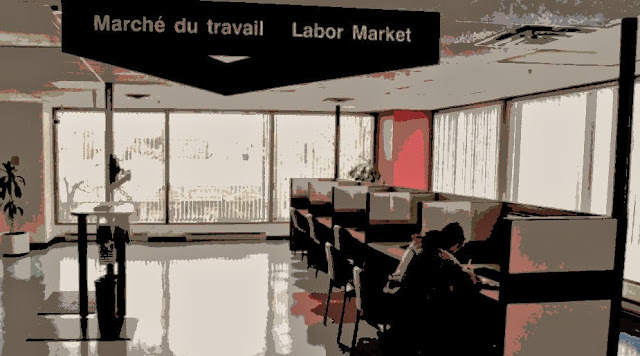 Those dirty bastard Cons, how low can they go?

And here's the bottom line: any country that puts profits and foreigners ahead of the interests of its young is not a real country.

A government that betrays its own people is unfit to remain in office.

And if Jason Kenney's big fat smile hasn't faded yet, it soon will eh?

For we are going to hang this filthy, traitorous scam around his neck, and Stephen Harper's neck, all the way to the next election.

Yup, there is a smouldering fire burning right across Canada tonight. An anger too great to imagine.

And when we've finished pouring gasoline on it.

It will help consume them... 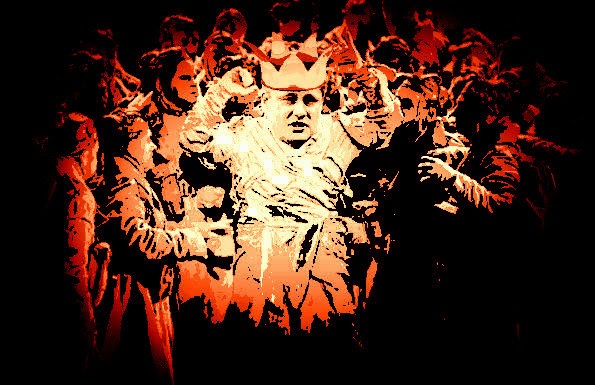 The Temporary Foreign Workers program has been going on for years. How come it takes Canadians so long to put 1 and 2 together?

What about the Pan Am Games? They want to fill 20,000 volunteer positions! And the Ontario government is offering students a 6 month extension on not paying back their tuition loans if they volunteer. No wonder there are so few jobs for young people. I haven't heard a peep from anyone on this charming little swindle however. Maybe six years from now someone will say something.

What is it going to take, to be rid of this corrupt Harper fascist regime?

Harper brought over thousands of Chinese for his, Northern BC mine plan. China has already been permitted, to take 200 mine jobs from BC miners.

Ex BC Liberal Premier Gordon Campbell shipped BC mills to China along with BC's raw logs. This put hundreds of BC mill people right out of jobs. Another mill just shut down because, of a shortage of timber. However, freighter after freighter of BC's raw logs still go to China.

Harper rewarded Campbell the post of, High Commissioner to the U.K. Campbell does a lot of dirty work for Harper. Mind you, Harper is no Conservative so, the BC Liberals are no Liberals either.

Jason Kenny is another fanatic henchman of Herr Harper's, doing his underhanded work for him. Kenny has no self respect, honor, decency, ethics nor morals, what-so-ever. Shame on Jason Kenny.

Harper and his team are so low? They can walk under the belly of a snake, wearing top hats.

hi ffd...good question. Who can explain why Canadians have remained so passive for so long despite all the atrocities of the Con regime? Why did it take so long for the media to realize the extent of the problem, when the stubborn unemployment rate should have told them that something was terribly wrong? If it wasn't for that CBC story on the Royal Bank workers, we would probably be still in the dark. When historians write the definitive account of this dark period, those questions will surely confound them,,,

hi anon...what it will take to get rid of that foul regime is for all progressives to work harder than ever to spread the message and get out the vote. It's that simple and it's that hard. As for the Harperites walking under the belly of a snake wearing top hats, I'm going to have to see whether I can turn that into an illustration... ;)

The program allows employers to bypass the labour market opinion process, which means there's no need for government approval. As well, companies are not obliged to pay their workers the prevailing market wage."

The atrocity being committed here is only exceeded by the Corporate media running the cover for it.

The Harper Cons do absolutely nothing within government unless there is immediate payback/kickback to the Conservative Party of Canada.

The employers getting these 20,000 workers will be monitored on their contributions to the Conservative Party of Canada and the number of party memberships coming form those businesses and corporations that are benefiting from decreased payrolls and not having to deal with a unionized work force.

The CPC party will be merging government immigration data with their own CIMS database to provide instant real time computer analysis of the paybacks coming back to the party.

Instead of screaming headlines and showing photo's of the businesses and corporations that are seeking these foreign workers, we get a "oh-so-casual" reporting on the matter with absolutely no investigative support.

And, if Trudeau does not work over these issues forcefully, we will be subjected to a minority Conservative government in 2015 and these programs will continue unabated.

we have no one to blame but ourselves. we the voters of Canada gave Harper his majority. Perhaps when it is time to vote again, we will think things through a little better. People cheered when Harper fired 10 thousand federal government workers. Some of those fired workers used to ensure employers actually couldn't find Canadians to do these jobs.