The Con Regime and the Whale Songs of Resistance 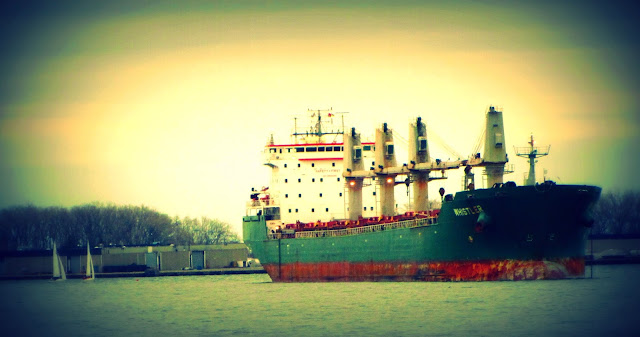 When I was a boy I sometimes used to dream about running away to sea.

So the sight of that old sugar boat today, made me dream for a moment of sailing to some place far from Harperland.

Because this tortured country is getting crazier by the day.

And so is the monster who would destroy it.

The other day in an article on Stephen Harper's adventures in Ukraine, Murray Dobbin wondered whether he was becoming America's useful idiot.

Stephen Harper's acutely embarrassing behaviour regarding the crisis in Ukraine -- demonizing Vladimir Putin and upping the rhetoric -- must be welcomed in the U.S. which created the crisis in the first place and apparently believes it still has something to gain by isolating Russia.

But it is not clear that Harper even realizes -- or cares -- what the larger game is. And that game may include a Russia-driven shift in global currency allegiance that could devastate the economies of the U.S. and Canada.

The hollow bunny warrior in pursuit of the ethnic vote... 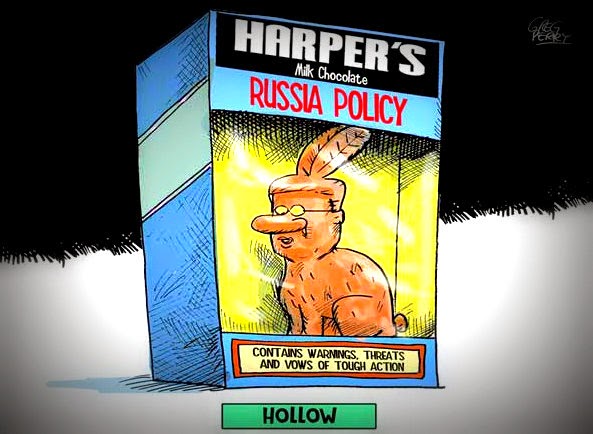 Or the desperate leader slowly losing his mind.

It is difficult to know what is going on in the fevered imagination of the prime minister but this time one has to really wonder if he has become genuinely unhinged -- always a possibility with someone both paranoid and narcissistic.

And who knows eh? Because madness does run in his family.

But what can be said with certainty, is that as he becomes more desperate, he is becoming even more RUTHLESS... 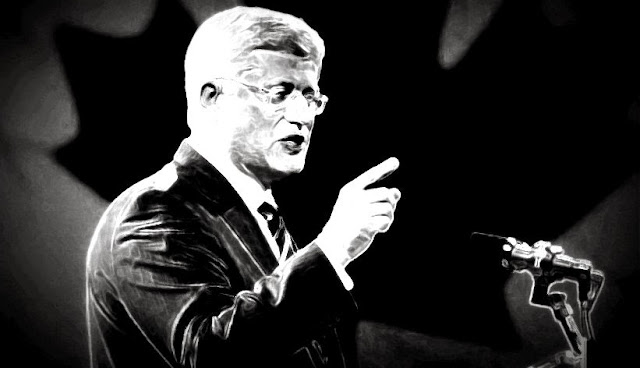 And is now not prepared to let ANYTHING stand in the way of his depraved desire for total domination.

He is moving ahead with his plan to suppress the vote, and make it easier to steal the next election.

He will not let anything thwart his oily dreams of turning Canada into a sinister petro state.

So nobody is safe.

Not even humpback whales. 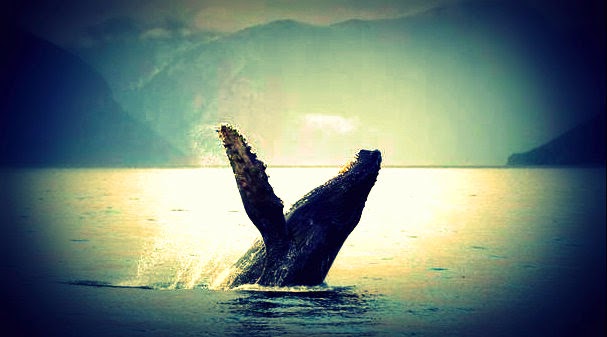 The Canadian government is downgrading the protection of humpback whales off the coast of B.C. under the Species at Risk Act. The move is being made as the government readies for a decision on the approval of the Northern Gateway pipeline, which would feed oil onto a tanker shipping route that overlaps with what environmental groups describe as "critical habitat" for the whale.

Because the evil that oozes out of his diseased mind burns like acid, corrupts anything it touches, and he is capable of ANYTHING.

And it all made me wonder what those gentle giants might tell us if we could understand their language, or their songs.

So I made this little video to try to imagine what that might be...

But then you knew what those beautiful giants might say. If you've been keeping me company on my journey to freedom you know how I feel. And I'm sure you know what we must do.

Work harder than ever to defeat that ghastly monster.

Drive him and his Cons from power by whatever legal means necessary.

Before they destroy everything good and beautiful.

Before they destroy this country...

Hopefully this attack on the whales will galvanize the Canadian public.

We all know who the real boss is otherwise Harpo would be pushing for Tar Sands to be refined and shipped as fuel. Far more value for Canada and far less risk of an environmental catastrophe. Shipping Butiman is a needless risk that only enriches non Canadians. It is a scheme that allows Canadian resources to be sold as less than world prices and then forces Canadians to buy back the refined products at higher than world prices.

I think a Humpback whale has shattered any and all illusions any Canadian has ever had for the asshole.

The quiet parade of Chinese Military Brass, have been visiting Canada.
03/26/2014
www.embassynews.ca

Everyone knows exactly why, Harper took the Humpback Whales off the endangered list. Harper is going to force the Enbridge pipeline through with the Communist China Army forcing, the BC people at gun point if necessary.

That is the country, Harper is selling us out to. However, the citizens of BC are supporting the FN battle against the Enbridge pipeline. The decent people of BC, will fight Harper right to the last ditch, Red China Army or not.

We will likely have to plea to another country, to save us from Harper and Communist China.

"And that game may include a Russia-driven shift in global currency allegiance that could devastate the economies of the U.S. and Canada." — Could be, would be, might be. Germany wants to sell BMWs and Mercedes, Porsche and Audi in the US (M-B, as you know, has plants in the US, and BMW will be building next year), so we'll see about currencies.
Meanwhile, the Chinese have yet to face their first market melt-down. They think they are bullet-proof; they aren't. Some chooch on Rabble believes that Western China will be a powerhouse. Well, the powerhouse is busy blowing its topsoil across the Pacific to our west coast. At least they'll be able to buy Canadian food — once they adjust their currency.
The biggest thing the EU could do for its own stability is to become energy self-sufficient ASAP.

changing the rules to get what you want is simply Harper. he can't listen in on our conversations, remember vickie and is wanting to listen--couldn't do it so they tried to change the rules. afraid they'll loose an election under the current rules--change the rules; want to ship oil through an environment where endangered species live--change the rules.

Harper doesn't care and never will. This is all about making the government and army of China happy. His "need' to sell our resources most likely doesn't even make the average person in China happy. All they get out of it is polluted air, soil, and water. We all loose. Those who gain: the politicians, the 1%ers.

Harper is an idiot for shooting off at the mouth about the Ukraine and sabre rattling--next thing he may see is Putin coming over the Artic circle. Then see Harper shit his pants. The man has no idea what an urban war in a highly populated environment is like. He may see it on t.v. but he doesn't know what it is like to live, really live, in those conditions. When the Europeans decide its time for a war, that will be soon enough. They don't need American or Canadian sabre rattling. Next time Harper decides it might be nice to have a war, he ought to do what leaders of old did: lead the troops into battle. See how he likes it then. Or if that isn't going to work for him, he can have his two children enlist and see how that feels.

Anonymous 4:23, I quote you "Everyone knows exactly why, Harper took the Humpback Whales off the endangered list. Harper is going to force the Enbridge pipeline through with the Communist China Army forcing, the BC people at gun point if necessary."

When I read what you had written, it terrified me, okay! THE COMMUNIST CHINA ARMY FORCING CANADIANS AT GUN POINT! Do you have any proof of this? I went to your link and it's just one huge article. People just don't have the time to read all this stuff. I wish you would have specified where in that article is the proof of what you state. It's not that I don't believe you because I have imagined something like this happening. It's the stuff of my nightmares, okay! NOTHING THAT SNAKE HARPER COULD DO WOULD EVER SURPRISE ME! A lot of your links did not deliver the information you stated. It's very time consuming to hunt up links and disappointing when the looked for info can't be found. In the future, it would be nice if you could be more specific. Not everybody has all day to spend on the internet reading articles!