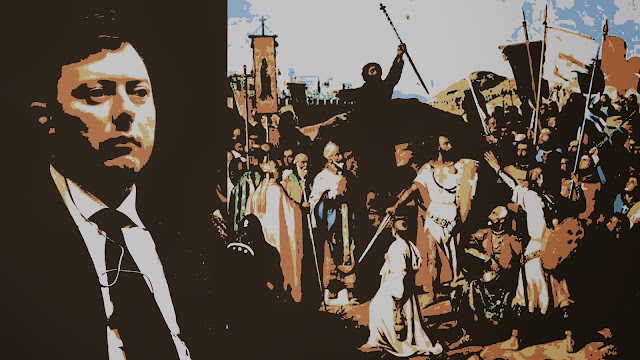 He tried every dirty trick in the book to try to win his nomination battle.

He smeared his opponents as closet Liberals. He used misleading robocalls against them.

He called on his rabid religious base to save him.

But nothing could stop the Con loon Rob Anders from facing his own personal Armageddon.

Former Alberta finance minister Ron Liepert will be the federal Conservative candidate for 2015 in the new riding of Calgary Signal Hill. Liepert has defeated six-term backbencher MP Rob Anders for the nomination.

And if Anders is disappointed, and no doubt blaming his loss on Satan,
I can only imagine how disappointed Stephen Harper and Jason Kenney  must be.

Because both put their own reputations on the line to endorse him.

I invite you to join with Prime Minister Stephen Harper and myself, Jason Kenney, in supporting our colleague, Rob Anders, for the Conservative Party nomination in Calgary Signal Hill.

But it just didn't work.

Which leaves Stephen Harper looking weak or like an IDIOT... 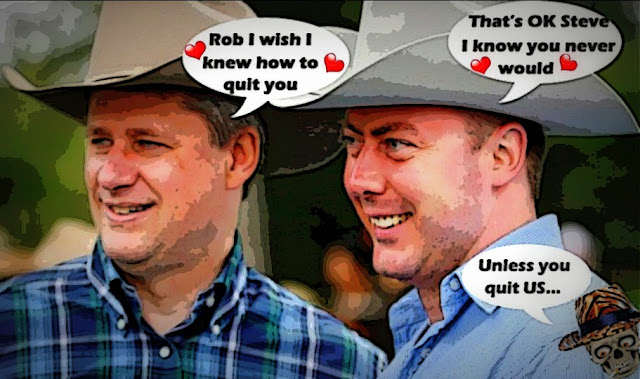 Wondering what he's going to say to his religious base, or the new Con candidate in Calgary Signal Hill.

Or what kind of trouble or embarrassment a bitter Anders could still cause him. 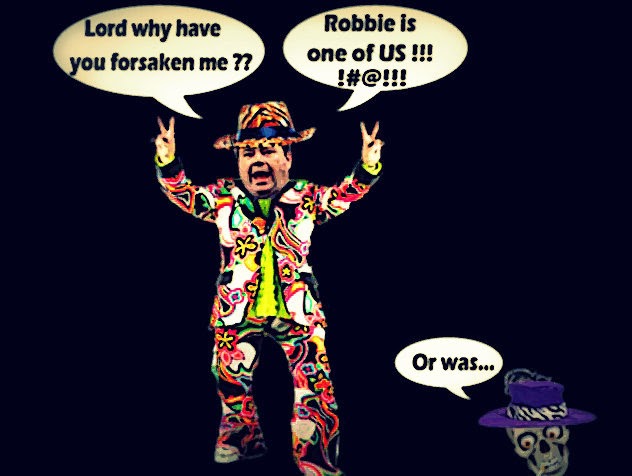 Moments after the results showed he’d won by a comfortable margin former Alberta cabinet minister Ron Liepert took exception to the fact that Anders had received the endorsement of cabinet heavyweight Jason Kenney.

“Quite frankly I think Minister Kenney should mind his own business. He should go into his own riding and try and get re-elected in his own riding and quit monkeying around at other nominations...anywhere in this province,” said Liepert, who made it abundantly clear that he was angry at the interference.

Like a pimp who just lost one of the prize hookers in his stable.

Or one of the SoCons he was hoping would one day contribute mightily to his leadership ambitions.

Of course, Anders is still going to be around for a while, and he could still run in another riding.

Anders will continue to serve as MP for Calgary West until the next federal election is called and it's not yet clear whether he will rule out running for the Tory nomination in another riding.

But that would only create even more divisions in the party, and cause that rabid religious base to stay at home next time or vote for another party. 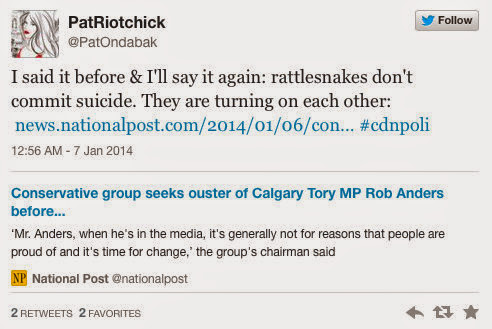 But in the meantime let's just enjoy the fact that Anders is finally where he belongs... 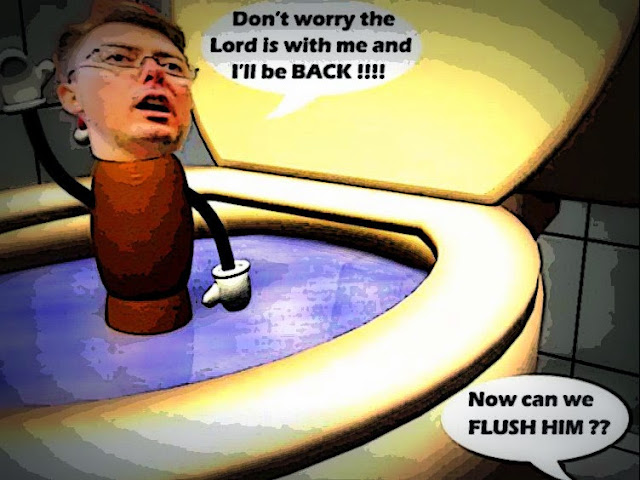 And let's show him how much we'll miss him...

One Con down, so many more to go. 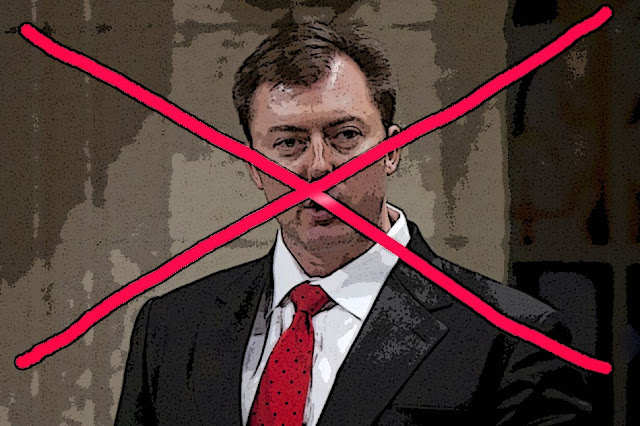 Down but not out. Mr Anders will pop up somewhere else to consume valuable attention away from more important matters. Don't know a thing about this Liepert fellow, but great to see Anders out, at least for now.

A kick in the base; great news. After all the nauseating, pandering to the reptilian brainstem nub, the snake strikes Slithery Steve. Reminds me of a story
. A snake begged a dog for a ride across a river. The dog said " you will bite me and I will die". " No said the snake, I won't do that because I would drown too". "Ok said the dog". Half way across the snake bit and the dog said" what did you do that for, now we'll both drown:." This is your fault , you knew I was a snake from the beginning' hissed the serpent.

Anders is only the tip of the iceberg when it comes to the treachery, going on in this country.

You want Harper and Christy Clark's job action plans? There you have it. They thieved millions of our tax dollars to advertise their bogus job action plans. Harper had given ex BC Liberal Premier Gordon Campbell the post as, High Commissioner to the U.K. Campbell was working with Harper to dismantle BC. Christy Clark is another snake in the grass. BC's vast resources and resource jobs are being handed to Communist China. The three of them are accused of cheating to win their elections.

Harper and his Cons and the Campbell/Clark BC Liberals are, disgustingly repulsive. Christy Clark also lied about her part in the Enbridge pipeline. Her stand against the pipeline was all bogus, lied about to deceive all Canadians.

It is imperative to be rid of Harper and to be rid of Chrisy Clark asap. Citizens coping with corruption in their Provinces, need to drive the corruption out. Harper's poison is polluting all through Canada, into every nook and cranny.

Frankly, I just wish this drama queen would disappear.

NEWS FLASH!!!
stephen harpie announces new position created in calgary west to be henceforth known as "supreme exalted poobah" to be given to his new favorite bitch, rob anders!!! (because nobody will even elect him dogcatcher anymore)
Film at 11 p.m.!!! (rated PG 18 because of all the graphic, blatant asskissing portrayed)

I'm putting it out here so we won't be too sick "if" it happens.
Is there an upcoming vacancy for an Alberta senator to be appointed by Harper?

hi bcwaterboy...I understand he is already looking at a neighbouring riding. Hopefully the people who live there will protest vociferously and start fighting themselves. The more they are divided the easier we will defeat them...

hi rumleyfips...that's similar to the story of the frog and the scorpion. When the frog asks why the scorpion bit him he replies" it's in my nature". When the Cons start fighting themselves only good things can happen. And we will enjoy the end of the story so much more than the beginning... :0

hi anon..I'm afraid I don't know much about Christy Clark, except that somehow she managed to win the last election which was a horrible shock, since I was looking forward to an NDP victory. But don't worry all these Cons are running out of history. Canada and the planet can't afford them anymore so their days are numbered...

Hi Way Way Up...unfortunately like Poilievre Anders has been a politician all his life, so we can expect him to try to find another riding or run as an independent. But either way he will cause trouble for the Cons so he will be useful idiot...

hi anon...it will be interesting to see whether Harper ever endorses Anders again. Or whether he finds him another job. I hear he's interested in king the Wild Hog Party which from what I hear sounds like just the place for him. Let Albertans pay for having inflicted him for so many years on the rest of us... ;)

hi anon...I don't think Harper is going to appoint another Senator in what remains of his term in office. Having been shown to have the reverse Midas touch, any candidate he reaches out and touches will probably scream and run for his or her political life...