Is Stephen Harper Losing His Grip on Power And His Marbles? 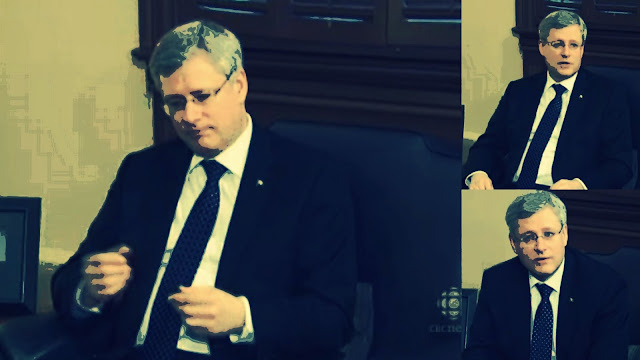 As you know, I've been watching Stephen Harper closely for eight long and horrible years, like some people watch birds.

And I can honestly say I've rarely seen him looking worse. Or more deeply disturbed.

I can't get what what Tom Flanagan says about him in his new book out of my mind:

So the last thing I needed to see him talking about was the Third World War.

"When a major power acts in a way that is so clearly aggressive, militaristic, and imperialistic, this represents a significant threat to the peace and stability of the world, and it's time we all recognized the depth and the seriousness of that threat." 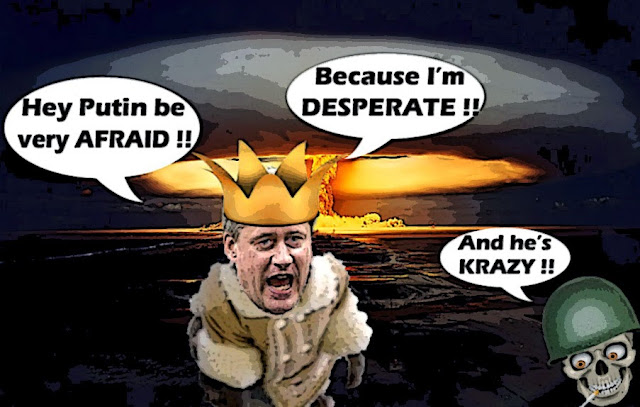 But then it is only Cowboy Steve... 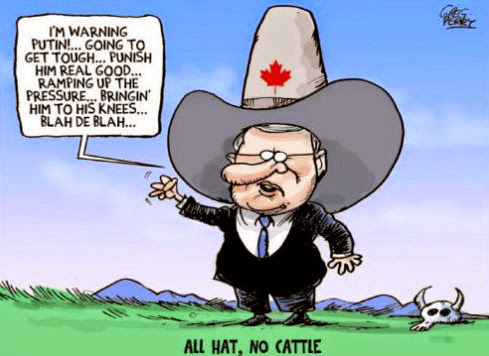 And what's driving him crazy isn't the scary situation in Ukraine, it's his own perilous position.

Stephen Harper was always a political loner but these days he mostly just looks isolated.

Jim Flaherty has left him. He was forced to whack his good buddy Dimitri Soudas, six weeks after he hired him. He couldn't save his good bigot Rob Anders even though he endorsed him... 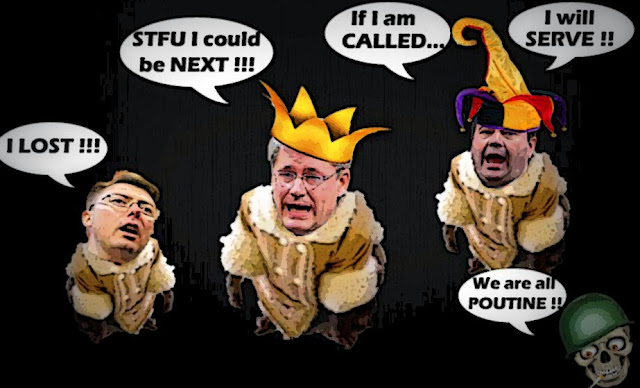 Jason Kenney wants his job. The scandals are piling up. The Supreme Court is slapping him around. The robocall trial is about to start.The RCMP are investigating the PMO.

He can't even use fear anymore, like Putin, to control his own troops.

After nearly a decade as prime minister, Harper’s capacity to reward loyalty is no longer what it used to be; nor is his latitude to punish those who cross him.

They are getting restless.

The more ambitious Conservatives are looking beyond Harper’s reign. The more timorous are afraid he might take them down with him.

Harper’s approval rating has fallen below 30 per cent. So have party fortunes in voting intentions. This is not a passing slump. It has endured for more than a year. And that can only exacerbate pre-existing tensions within a jittery party.

And he's getting more and more DESPERATE.

Once he used to say that he liked to see fear in the eyes of others.

Now when he looks in the mirror he sees his own fear staring back at him... 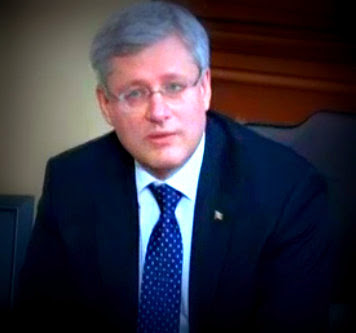 Because let's be clear eh? That's what it is.

He can see the writing on the wall. Or The Abyss. Or the elevator shaft.

Former Bloc Québécois leader Gilles Duceppe once compared leading his party to a devastating defeat in 2011 to being trapped on an elevator in free fall. It is time to put a safety warning on the door of Harper 2015 re-election ride.

And the questions we must all ask ourselves are these:

Will he stick around and risk being humiliated?

Will he resign in the fall when he must decide whether to go or stay?

Or will he go over the deep end and require an INTERVENTION?

All I know is that he must be thinking about leaving. He's a real mess.

There is fear in HIS eyes... 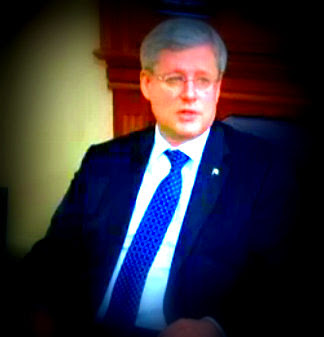 And if we keep up the pressure.

One way or the other.

Our nightmare will end.

I've studied psychology and from what I've seen is not good. Mr. Harper is an obsessive compulsive, borderline psychotic, sociopathic megalomaniac with delusions of grandeur. Your typical third world dictator if you will. His grip on power is fading as his once loyal subjects are now expressing their own opinions and are conspiring against him before the sword falls their way. Sadly, I don't see him leaving of his own volition but rather by a palace coup or by becoming another Harper succumbing to the perils of madness.

Of all his aggravating behavior his pompous finger wagging is the worst. Ukranie is another PNAC project.
You have to wonder if he really believes in the four horseman and is doing everything possible to help them saddle up.

harpie will not leave voluntarily . . . EVER!
The r.c.m.p. "investigating" the p.m.o.? More kabuki.
This is just another cheesy sympathy play put on by your local fascist tories to gain the sympathy vote
next year. It, unfortunately, will probably work. We, as a people, are some of the most gullible, bovine and
lazy people on the planet at this stage.
Oh, wait! I know! Let's protest by signing another petition and not voting in this election too! That'll teach that bad harpie man! (as he guffaws at being in control for another, at least, 4 years)

It's not enough to remove this cancerous party from office. We need to investigate what kind of benefits they received from the corporations for screwing the country over.

I agree with anon 07:56. With Harper's mood swings between depression and rage, I am wondering if, Harper is also bi-polar? Nor will Harper ever step down, he is far too arrogant and stubborn. Harper actually thinks, he is doing a good job for this country. Harper is working for, the bottomless pits of greed corporations. Harper is rabid to be a big shot, on the International scene. For all Harper really is, other countries laugh at. Harper actually thinks other countries don't see him, for exactly what he really is and how he treats his own citizens. Harper loves Harper and that is all he cares about.

As far as this asinine *Fair* Election Plan? Poilievre may as well have stuck, with his robo-call fraud Election Plan. If we don't get rid of Harper pronto, this country will be destroyed by the hand of a madman.

There are no Laws in this country, for the every day working Canadians. Nor is there any democracy left. If I wasn't so damned old? I would lead the revolution, to get rid of that fascist dictator destroying our country.

hi anon...thanks for that diagnosis, I will sleep better tonight. ;) Seriously though, I have never doubted that there was something terribly wrong with that man. He is a bully, he's cruel, and if you study his career he has never shown an ounce of sympathy for those less fortunate than him. When you give a man like that absolute power, in a complacent country, who knows where he might lead us?

hi Steve...as I said in my post I'm deeply concerned about Harper's meddling in that crisis, since his motives are purely partisan. In that video in the CBC story he describes himself as "a student of Ukrainian history." You know, like the hockey expert eh? So now i'm even more worried...

hi anon...I agree that Canadians must be one of the most democratically lazy people in the world. I can't believe how brutish we have become. I read the story on the CBC cuts, and then I read the comments and I felt like vomiting. However, the Harper regime is badly damaged. The party establishment, and Jason Kenney, will not be quiet for long if those polls remain in the dumper. So if we do our part and keep up the pressure, I'm still confident that Harper might crack and resign before the next election...

hi Stuart....first things first. Let's use any evidence of corporate collaboration against them in the next campaign if it can help defeat them. And then once they are defeated begin a massive inquiry into every aspect of their hideous years in power. Because you're right, objectively speaking the Cons are mere tools of the corporations who pull their strings, and together they have helped ruin this country...

hi anon...I don't think Harper is bi-polar, and I certainly wouldn't want to suggest that mental illness is his problem. Because mental illness doesn't make you bad. It's his psychopathic tendencies that are the real problem. He simply cannot feel the emotions or the pain of others. And yes, he has made a horrible mess of our country. But you made me smile when you wrote "If I wasn't so damned old I would lead the revolution..." And inspired me as well. I notice a lot of older Canadians out there these days, standing up to that ghastly regime. In fact I would say they are leading the pack. I think that's fantastic. So while I try to herd the young to the barricades, like cats. Don't you give up the idea of leading the revolution... :)

watching his latest rant, you could think he was referring to the invasion of Iraq by the U.S.A., Canada, G.B., etc. Oh, its Putin in the Ukraine.
Harper is clearly out of touch with what the Europeans want or rather don't want. They don't want another war on their soil.
Europe will not go to war with Russia unless its an absolute must do and the citizens are prepared to this.
He is just crazy

If I were Harper I would be worried. HIs bombing of Libya was nothing short of mass murder. He may very well end up faceing charges of mass murder. I for one would send him to the international court in the Hauge in a heartbeat. He claims to have had a mandate from the U.N. but most of the world disagrees. Lets do what he wants, get tough on crime. Starting with him.