Why Stephen Harper is Going to Wear the Rob Ford Scandal. 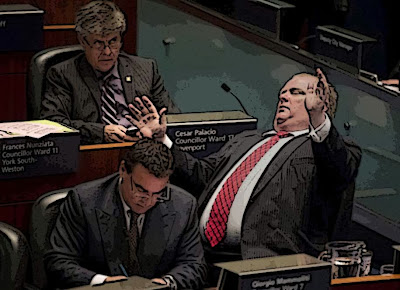 Well let's put it this way eh? It wasn't pretty. He rocked back and forth in his chair mocking a councillor by pretending to be a drunk driver. He shouted insults at people in the audience.

He stomped around like a bull in a crack house, knocking down a councillor. He compared what was happening to him to Saddam Hussein's invasion of Kuwait.

Toronto city council voted by a wide margin on Monday to slash the budget of embattled Mayor Rob Ford — a dramatic move that followed a raucous day in the council chambers that left the mayor promising that next year’s municipal election will be "outright war."

Meanwhile in Ottawa, what do you think his good friends the Harper Cons were doing? Standing up for law and order and attacking Justin Trudeau !!!!

At the same hour Toronto City Council debated a move to strip Mayor Rob Ford of his powers because of his crack use, the Conservatives continued to lambaste federal Liberal Leader Justin Trudeau for his stance on marijuana.

While saying how sorry, so so sorry, they were about their poor pal Robbie.

Monday, on the way in to the House of Commons chamber, Conservative MPs Jay Aspin and John Carmichael described Ford's situation as a "tragedy." Others, such as Peter Kent and Ted Opitz, refused to answer any questions about Ford.

Treasury Board president Tony Clement said, "As a lawmaker, I believe Mr. Ford has to be accountable." He added, "As a person of faith, I believe we also have to show compassion."

Or just keeping their lips sealed with crazy glue as instructed by the PMO. Because Great Law and Order Leader and his Con thugs will send thousands of ordinary Canadians to one of their overcrowded jails for the "crime" of smoking marijuana. They will call anyone who doesn't agree with them CRIMINALS.

It has been a good few weeks for eggshells. Not a one has been broken by the federal Conservatives when it comes to the Toronto Mayor Rob Ford fiasco.

So gentle have they been on the foul mouthed, crack smoking, drunk-driving mayor, that you might think they simply missed the entire story. After all, how could a government that bursts a blood vessel when anyone discusses marijuana laws remain virtually silent on a senior politician’s admission of smoking crack?

Because Robbie may be a ghastly bully, a racist, a homophobe, a man who treats women like dirt, a drunken driver, a drug abuser who hangs out with dangerous criminals. But they still need him.

He may not be pretty in pink, especially when he's hammered eh? 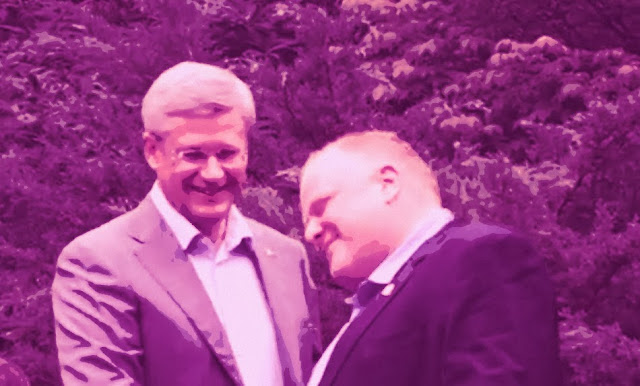 Hailed for years as a Conservative hero by Prime Minister Stephen Harper, Ford was, until this scandal broke, considered the key to greater federal Conservative success in Toronto. Ford, remarkably, still has significant support in the city.

And Harper needs every one of those votes if he is to maintain or grow his tenuous bridgehead in the Greater Toronto Area. Even the mildest criticism from Harper could offend Ford Nation, which, it seems, is perceived as a significant risk.

And nobody has been more hypocritical, or more cowardly, than Great Ugly Leader himself. Who even as the Fordzilla rampaged through Canada's largest city, and made the whole country look bad.

Has said absolutely NOTHING about his old fishing buddy... 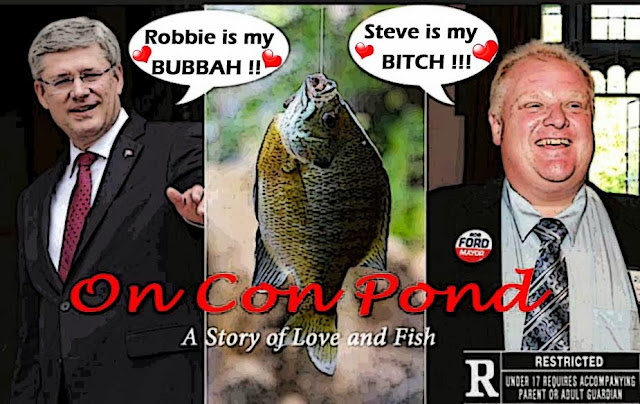 Which is why I was really glad to see that Tom Mulcair says the Cons aren't going to dodge that scandal. They are going to wear it.

"The Conservatives have been saying for years that Rob Ford's their guy," Mulcair said Sunday during a surprise stop in Toronto to support his party's candidate in the coming federal byelection. "They're going to have to wear it now," he said, repeating that Ford should resign immediately and get help.

As they rightly should eh? Because even in the depraved state of Harperland, you can't pose as champions of law and order, and try to turn this country into a prison state, while ignoring Ford's criminal behaviour. Or his gangsta friends.

Just like Tony Clement can't talk about "compassion" for drug addicts, when old rubber lips spent years trying to close down the Insite clinic in Vancouver. Even if that could have killed hundreds, if not thousands, of Canada's poorest and most vulnerable people.

Oh yeah, the ghastly Cons are not going to get away with this sleazy Frod fraud. Their phony reputation as Crime Busters has been BUSTED.

We're going to make sure that the words Harper and Ford go together like ham and eggs, or shit and toilet paper, all the way to the next election.

Just like the NDP was doing today in the House of Commons, by quietly chanting "Rob Ford" every time the Cons got up to speak.

Because as I've said before, when you have a widely despised government that has a Senate scandal, and a robocall scandal hanging over them. Any other scandal that rubs up against them, can bring the whole rotten edifice crashing to the ground.

Yup. If the Cons want Robbie they are going to have to PAY for him.

If Robbie wants a war he is going to get one.

And if Stephen Harper wants to use the brutish Fordzilla for his own perverted purposes. 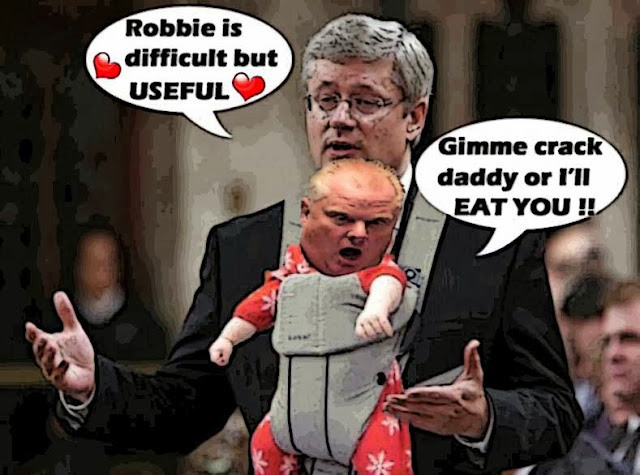 We've been lied to, swindled, defrauded, ignored
and remembered only when they want our votes..
to allow them to perpetrate their myth, their cronyism
and set themselves and corporatist backers up for life

I caught what Harper and MacKay said about, Trudeau and his stance on pot too.Harper and MacKay think alcohol and crack is just fine. However, don't you dare smoke pot. They are too stupid to realize? If Ford had smoked pot? He wouldn't be in the mess he is in.

Harper, Flaherty and Ford are all good friends. Harper cut his senators throats, to save his own miserable neck. Harper also campaigned very hard for Saulie Zajdel. I believe he will go to prison. Perhaps Bruce Carson will go to prison too. Likely Porter as well. Ex BC Liberal Premier Gordon Campbell is, Harper favorite henchman. Campbell was so drunk, he even drove on the wrong side of the world.. Harper sent Campbell to the U.K. as, High Commissioner. Boessenkool, another of Harper's henchmen, did some serious misconduct, to a female staffer, while he was drunk out of his mind.

Dear Salamander.
You are being waaaayyyyy too kind to these traitorous, criminal bastards but hey, you're entitled to your own take also. :-)

hi salamander...I know how you feel. I started writing this blog eight years ago feeling exactly the same way. Now what I need to know is how exactly are the Liberals or the NDP going to defeat the Cons in the next election? Because if they know they're not sharing it with the rest of us. I see some good stuff in parliament, but not much more than that. I don't see anything new, I don't see any real attempt to frame the Cons in the simple powerful way you need to break through the clutter of our distracted age. What I do see are the two parties fighting each other over of all things the percentage needed to win a Quebec referendum. While Lord Harper sits back and enjoys the distraction...

hi anon...as I said to Salamander, I know the Cons are rotten. But the question is how to we make absolutely sure we defeat them in the next election? Because if not we'll have to spend another five years, feeling angry or depressed. And who wants that?

hi Way Way Up...I just wrote a post about it. I think it's hilarious. Especially after how Kory Teneycke had been promoting it as the "ultimate" reality show. And the best part is the way the Ford brother almost brought down Sun TV by taking FIVE hours to tape a ONE hour show. And then forcing the Sun editor to spend EIGHT hours editing it. Can you imagine what the blooper's reel is going to look like? ;)

One year when I was teaching in Nunavut another colleague and I worked with a group of kids to produce a music video and short film about life as they see it. Now these kids were pretty new to the whole film making process but I know for a fact that it didn't take them 8 hours to edit down for one hour. I think these so-called professionals at SNN nee to go back to school if they are that pathetic. Better yet, they should just piss off and get off the air. And the kids' blooper real was entertaining indeed. Yes, we can only imagine the crap that came out of Ford's mouth that never made it to air.

Horrible, you are scoffing of that poor fish...