Stephen Harper and the Con Bagman 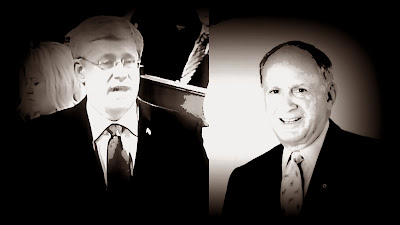 Well there he was again today answering all questions about the Senate scandal by repeating the same mantra.

Nigel Wright and Mike Duffy are the ones responsible. That's why Duffy is no longer a member of the Conservative caucus, that's why I fired Wright.

But for some reason not explaining why he hasn't fired Irving Gerstein, the Con bagman-in-chief.

Even though according to the RCMP affidavit ,Gerstein was apparently willing to help Wright fix the scandal with Party funds.

Conservative Senator Irving Gerstein, the chair of the Conservative Fund of Canada, had previously approached Mr. Wright to ask if he could assist in any way. So, on Feb. 22, Mr. Wright called Mr. Gerstein and inquired whether the fund would pay expenses, which he still believed were about $32,000. Mr. Gerstein confirmed it would.

Although that's NOT what he told the Con convention before the RCMP documents were released.

The head of the Conservative Party’s fundraising arm has spoken out about the Senate spending scandal...He said he made it clear to Wright the Conservative Fund of Canada wouldn’t pay for Duffy’s expenses and never did.

And even though it is also alleged that Gerstein tried to influence the Deloitte audit.

The Conservatives’ self-styled chief bagman contacted a partner at Deloitte allegedly to try to influence an audit into the Senate expense scandal, according to information in new court documents released Wednesday.

The court filing identifies Gerstein’s Deloitte contact as Michael Runia. The RCMP interviewed Runia, who confirmed that he and Gerstein have “regular contact” because Deloitte is involved in auditing the Conservative Fund.

But for some reason whenever Stephen Harper is asked about Gerstein by Tom Mulcair or Justin Trudeau. He always, without fail, dodges the question.

And as Mulcair pointed out today, doesn't even mention Gerstein's NAME. So sensitive is the subject.

Which I suppose isn't surprising. Because he can't blame Wright for that one eh? Not when Gerstein isn't Wright's subordinate, and answers only to Harper.

And of course Gerstein himself isn't talking to reporters... 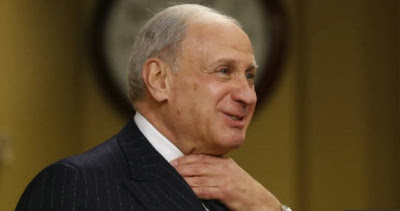 No doubt having learned that discretion is the better part of valour, after being caught in the net of that other Con scandal.

So you might think that Deloitte might help clear up this matter when they appear before the Senate expenses committee tomorrow. But if you did, you'd be wrong.

The Senate committee that dealt with Mike Duffy's ineligible expense claims — claims that are now the subject of an RCMP investigation — will meet Thursday to question three Deloitte auditors about potential interference in their audit. But two of the main players in the controversy won't be there.

Because strangely enough the two people we REALLY need to hear from won't be there.

So the stench of scandal continues... 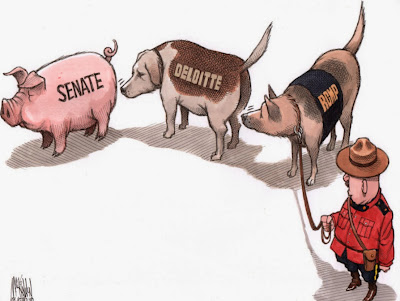 And if you want to know why Stephen Harper won't fire Gerstein it's probably because it's so hard to imagine that he would have approved paying off Duffy with Con funds, without making sure that Boss Harper was good to go.

And who knows what might happen eh? If he tries to throw him under the bus, as Mulcair was demanding today.

“So was it a question of principle or is it a question of price? Because if Gerstein is doing the same thing for which he’s reproaching Wright, he should have been thrown under the bus as well and yet he’s still sitting behind the prime minister in the Conservative caucus.”

Because that might not only be risky, but also expensive, since Ol' Irving just happens to be the best bagman in Canada. And for Harper money trumps everything, even human rights.

When the Conservative government does trot out its once-dear human-rights rhetoric, it’s usually on files where there are votes to be won at home and only a tiny amount of trade at risk.

Seven years on from promising not to sell Canadian values out to the almighty dollar, doing exactly that is now more or less our official foreign policy. Call it Mr. Harper’s Chinese lesson.

The bagman must account for his actions. And so must Stephen Harper.

This sordid scandal is bigger than Nigel Wright and Mike Duffy.

And sooner or later they'll all go down TOGETHER... 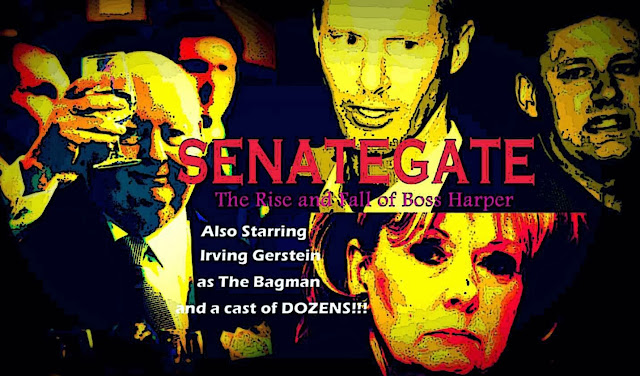 Well .. they live in the clouds dude.. they gots massive dough .. millions or billions
& they aint workin late.. or gettin up at 4 ayem like you
and they have a Land Rover to trample the maple leaves in their driveway
and a nanny or two n a maid to raise their kids

There's something incredibly special .. bout you ..Simon
Its so obvious.. and I see it n read it
same truth that comes from Galloping Beaver
same view as Norm or Damien Gillis.. Thaila
Kady, MoS, Pogge or Saskboy

I wonder how big this Duffy-gate "iceberg" is. Look at all the collateral damage to PC members and all the stonewalling, conflicting stories and lies from Harper on down. I think there's something larger at risk here than Duffy. Could the entire CPC leadership including the PMO be terrified they will be exposed for a "massively damaging" cover up?

Two players can change the game. Duffy, who was used by Harper and now refuses to be a fall guy for Harper. Wright, who is a business man whose name is getting stigmatized while he takes bullet after bullet for Mr Harper. It's not good for Wright or his business associates. Sooner or later he's going to have to clear his name or he's going to be hung by Harper.

These two hold the keys to the door. Pressure needs to be applied to Harper and they can do it. The RCMP need to sit them down and explain the possible scenarios Harper has planned for Duffy and Wright. Then they can think about getting their lawyer to write up statements that are most likely at odds with the "Harper Version" and deliver the statements to the RCMP

Nice one Simon. Very nice. And we must never forget .... it all goes back to Cadman.

hi salamander... Thanks for your nice comments. At this dark time of the year, in this miserable corrupted Harperland, we need to encourage each other, and keep pushing for something better. Which isn't easy eh? Not when you get up in the darkness, and by the time you get home there are only a couple of daylight hours left. However, there is one good thing about that. It may be dark when I awaken, but shortly after that I get to see the sun rise. It can be a spectacular sight, and I choose to see it as a metaphor for Canada's reawakening. The Con night will end, and there are brighter days ahead...

hi janxx...I think the Duffy iceberg is big enough to sink the Con Titanic. That ghastly regime is guilty of far worse things, but the Senate scandal comes at a time when people are really tired of them, so the damage can be inmense. Also remember that Lord Harper claims the RCMP is only investigating Duffy and Wright, but how does he know that? I think they are investigating them all and if and when charges are laid they will be the beginning of the end of the Con regime...

Like you said Irving is the best bagman in Canada. You fire him, there goes the money and all the friends he collected it from. The cons need a lot of money to continue hiring all those spin doctors to get them elected.