The CBC and the End of Don Cherry 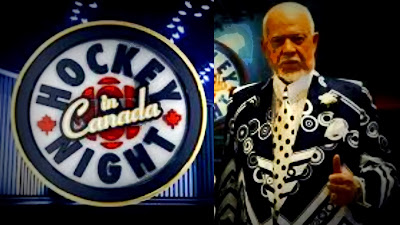 It's not a good news hockey story. It's a huge blow to the CBC.

For years, HNIC has been a cash cow that helped float many of CBC’s other news and original programming endeavours, with some estimating it was worth $200 million, and up to half of the TV network’s advertising revenue.

And of course the CBC can't count on any help from Stephen Harper.

The Prime Minister's Office has slammed the door on any bailout for the CBC to make up for lost advertising revenue from hockey broadcasts. "CBC already receives significant taxpayer funds," PMO spokesman Stephen Lecce wrote in an e-mail.

But there could be a big consolation prize. It could be the end of Don Cherry. 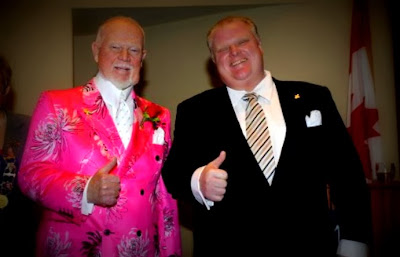 The long era of Coach’s Corner, which has run more than three decades since Cherry arrived at the CBC, appears to be approaching its coda...Cherry, who turns 80 in February, plans to use his Saturday night pulpit to reveal his feelings on the tumult of change – but the public utterances of the new bosses do not bode well.

Which would turn me practically pink with pleasure eh? Not just because I can't stand that revolting Con redneck. That friend of the Ford Nation. Or hate what he has done to hockey. Or his ghastly Coach's Corner. 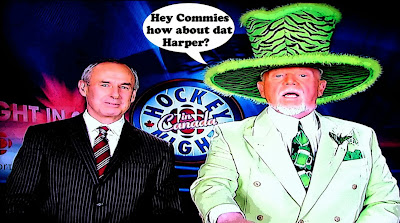 For the better part of the last decade, Don Cherry's HNIC has become an advertisement for the Canadian Armed Forces and the government's foreign, imperialist adventures. Under the auspices of hockey commentary, Cherry has been given a platform to vent his xenophobic, pro-violence and sexist rants without consequence, and the more unhinged he became, the more CBC decided they needed him. His offences number far too many to catalogue here, but you could do worse than start here, here or here.

But also because I hate how the CBC has pandered to him and other obnoxious right-wingers like Kevin O'Leary, and in the process dumbed down its entire programming.

The CBC has mistaken Canadians for airheads, feeding them silly reality shows such as Battle of the Blades and Dragon’s Den, and sitcoms and dramas as weak as they are forgettable. Does it figure the lowest-common-denominator approach is the only way to compete and justify its $1-billion subsidy?

Until even its once respectable news shows have become frothy second rate versions of what they once were.

The public-affairs programming is as cream-filled as the rest. The Fifth Estate long ago gave up probing the weightier issues of our democracy...The National is an overproduced, scattered mess of overwrought or feel-good segments passing for reportage. This week, Peter Mansbridge is trying out the bobsleigh run in Calgary. (“Awesome!” he tweeted.)

Discussion panels are no longer forums for spirited debate but marketing vehicles for self-important talking heads promoting their own brands...Thoughtful political debate is verboten today. Mindless cheerleading is de rigueur.

So hopefully this new hockey deal will help the CBC raise its sights, reboot or reimagine itself.

And understand one thing: Cons will ALWAYS hate it no matter what it does. And its true friends, those who support public broadcasting like I do, want it to stop pandering to the right-wing rabble.

And there can be no better start than by firing Don Cherry.

And then for chrissakes GO.

Thirty years is more than enough.

And just like your buddies Stephen Harper and Rob Ford.

Your time is finally OVER...

Much of the "dumping" down in news has most likely been an attempt to ensure the cons don't eliminate the CBC all together. As much as some of us love the CBC, there is nothing to stop stevie slime from eliminating it or all its funding. Some of the shows you may not like, such as Dragon's Den and Battle of the Blades are actually enjoyed by many. It may not be your idea of entertainmnet, but it is for others.

What I liked about CBC was it has something for everybody and good news. Now the news part isn't so great, but its better than the other channels.

Yes, Cherry will go and some of his rants are over the top, but again there are a lot of people who love watching him on coaches corner. Not watching hockey, his being there or not isn't going to effect me. However, given some of his rants, it might have been better had he retired at an earlier date.

The CBC losing hockey is just one more source of comfort for Harper, for the rest of us another sign that he may be right about the apocalypse. Would it not be ironic if he destroys Canada and the sky god does not answer back with the destruction of the world. How foolish would he feel then?

Although I particularly love hockey (go Habs!) I haven't watched in a while, due to that blowhard little puke, Cherry...
And the CBC? It has become Harper's sycophantic cheering section - I used to watch it almost exclusively, now...rarely..even our local 6 o'clock news her in BC has been taken over by a geriatric old fart from another rightwing station, who retired, than magically appeared at the CBC...so much for that news program..
At least here in the people's Republic of BC, otherwise known as Vancouver Island (almost straight NDP voters with the only two elected Greens in the country!) we have a semi-decent news program that isn't bending over to receive anything, as it were...but hockey? Who knows what will happen...controlled by a nasty corporate gansta like Rogers, no telling..I hope Bettman (another little creep I can't stand) is sleeping well...

Idle No More was beginning to happen last year at this time because Hockey was off the air and with it, Don Cherry. The lack of Don Cherry on the "public airwaves" allowed for an intellectual and cultural exchange of oxygen when air time was opened for something more noble and uplifting. The rise to global prominence of Idle No More was a great moment for the emerging Canadian nationality. Harpercon's designation of Rogers as national broadcaster is not acceptable. Defend Public Broadcasting. Liberate the CBC from the privateering Harpercons.