Has the Time Come for Stephen Harper to Resign?

I like the look on Stephen Harper's face these days. He's starting to look like a deer caught in the headlights.

For the first time you can see fear in his eyes.

The man who likes to scare and bully others is now scared himself.

Because even he must know by now that his story just doesn't make sense, no matter how many times he keeps repeating it.

Prime Minister Stephen Harper continued to defend himself Friday as serious questions persist about his potential involvement in an arrangement for his former chief of staff to pay Sen. Mike Duffy’s ineligible expense claims.

Prime Minister Harper has continued to insist that the “good to go” meant the green light on Mr. Duffy repaying his own expenses, not having the party pay for them.

For why would Nigel Wright need to get the green light for Duffy to pay back his OWN expenses? Who could believe that?

And even he must realize that his Con regime has just been hit by a massive torpedo.

Make no mistake about the RCMP torpedo that has hit Stephen Harper’s ship of state this week. It has thrown the prime minister into uncharted waters with barely more than a plank to hold on to and keep his head out of water.

Not only did Conservative strategists not see the hit coming until it was almost upon them, but they had cause to hope that the RCMP would eventually throw the prime minister a lifeline instead of leaving him to sink or swim in the debris of his own Senate scandal narrative.

And that after making a mockery out of the truth for so long, he is getting entangled in a web of his own lies... 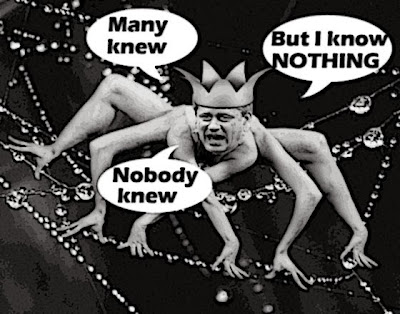 So all his stories are turning out to be just stories. Like the whopper he told us when the scandal broke. The one about how his buddy Nigel Wright was just a nice guy doing a personal favour for his old friend Mike Duffy.

Which like all the others turned out to be not true.

When news first leaked about the transaction last May, the first explanation offered by unnamed insiders — but later denied — was that Wright and Duffy were friends. The RCMP documents suggest nothing could be further from the truth. Indeed, as the negotiations over Duffy's repayment dragged on and the true extent of his expense claims became clear, they show Wright and other top PMO aides became increasingly exasperated with the senator.

Golly. What a surprise. Did anyone really think that Wright and Duffy had anything in common? 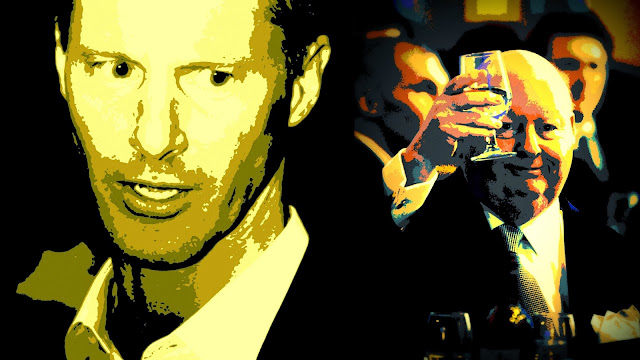 Could anyone really see Wright, the ascetic religious fanatic, sitting in a bar getting drunk with Mike Duffy? Or could anyone imagine Ol' Duff jogging through the dark streets of Ottawa at four in the morning, like Wright likes to do all the time?

Right. When I heard that one I KNEW they were lying. I remember that clearly eh? Because I almost gave myself a hernia I was laughing so much.

But of course now Stephen Harper is the one feeling the pain.

So I'm not surprised to see that some in the media are calling for his resignation.

It is time for Stephen Harper to declare victory and announce that he will step down as prime minister. The Senate scandal adds an air of urgency. But it is not the only reason why it makes sense for Harper to announce, perhaps after New Year’s, that he is ready to relinquish the country’s top job.

As Brian Mulroney found, once political damage reaches a critical level it is impossible for a leader, or his party, to recover.

Because if they don't you can be sure that it won't be long before Jason Kenney does.

I expect Employment Minister Jason Kenney understands this. That’s why he is taking the risk of differing with Harper on minor but telling matters — such as how to deal with Toronto Mayor Rob Ford. In effect, Kenney is signalling to his party: Yes, there is life after Harper; and maybe it should begin now.

Don't you dare destroy the Conservative Party before I become Prime Minister !@#!!!!

Which as you know is why I am such a strong supporter of Kenney's campaign eh?

And plan to put up these posters in all the areas of Toronto infested by the Ford Nation... 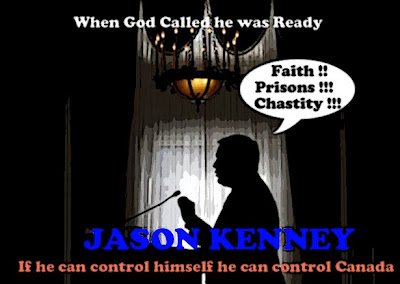 Or wherever morons gather.

Because I know that the day Kenney becomes Prime Minister, the Cons, as we know them, will be gone for a GENERATION.

Of course, we still have a lot of work to do. We must explain this scandal to our friends and neighbours or fellow workers, or all those who don't follow politics as closely as we do. And we must attack the Cons harder than ever before.

But we have come a long way haven't we? When we can read the words Stephen Harper and the word RESIGNATION in the same sentence, in the MSM, after so many depressing years.

Yup. It's still horribly dark out there. The darkest time of the year... 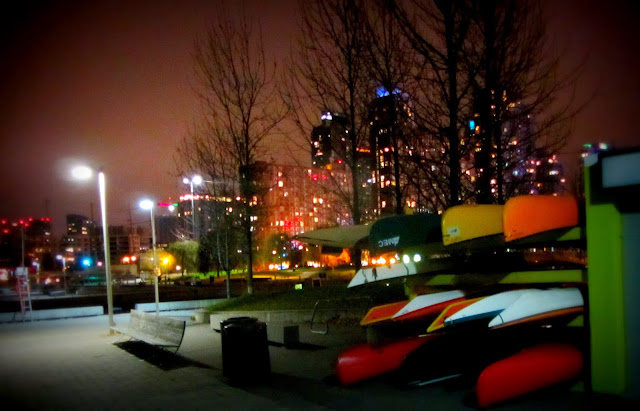 And it's still Harperland.

But the writing is on the wall. Brighter days are coming.

And Great Ugly Leader is almost good to GO... 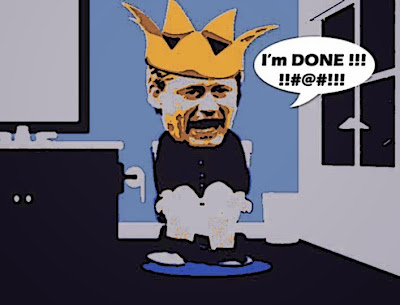 I love the shot of the TO cityscape with canoes - it's cold but ever so hopeful.

Herr Harper's henchmen are, just as bad as he is.

MacKay is sneaking in surveilliance, behind our backs. Oliver called Canadians eco-terrorists because, Canadians objected the pipelines. Toews said, Canadians are with the pedophiles, we objected having our internet monitored. Callandra jumps up and down in rage in Parliament, reminds me of Goebbels. None of Harper's henchmen are, worth the powder to blow them to hell. They would only carry on Herr Harper's, selling the rest of Canada to Communist China. We don't even know, just how much of Canada, Harper has given to China. Harper even permitted China, to buy up our Canadian farms.

To actually save Canada from Harper? We would need to, get rid of the giant corporations and the entire lot of, the so called Conservatives. We would have to kick, the Communist Chinese out of our country. Harper's FIPA deal with China means, China will be in Canada for a minimum of 31 years. Harper's Omnibull-S-Bill gives Communist China to sue Canada if, anyone tries to block China's, takeover of our country. China can even sue Canada, in the International Courts.

Most of us in this neck of the woods, signed the petition against Harper's FIPA deal with China.

Stephen Harper isn`t afraid of the system removing him, he`s afraid of the individual removing him, Senate scandal was a distraction as is Rob Ford, the shining light of scrutiny left the real issues and shone on political meaningless dirt, Harper`s radical agenda marches forward while the sheeple cheer on the convict party.

hi Beijing...I'm glad you liked it because that's EXACTLY what I wanted to convey. It may be cold and dark now. WAAAAAH !!! But pat the red canoe on its bottom, because summer will be back... :)

Simon don't you have any respect for Great Leader? And who is going to wipe his behind now that Kenney isn't available? :P

stevie slime has not yet left the arena. do not expect him to either. he doesn't have another job lined up and he has much work to do for his friends.

Now Jason will simply have to wait until stevie is defeated in the next election, if he does get defeated.

16 X 9 had an interesting item on this evening regarding the amount of taxes very successful Canadian companies don't pay. If the cons changed the rules, Canada would take in about another 8 billion a year. Now we know Paul Martin helped established some of those "rules" and the cons simply improved upon them. In the meantime Canadians pay more and more taxes. The country runs higher deficeits. No the slimers aren't going anywhere they have to ensure all the wealth and highly profitable corporations continue to pay no taxes. the slimers laid off 3K workers at Revenue Canada so who is even going to catch the corporate cheats. That is why harper stays in power and will for years to come. the 1%ers need him there to save themselves billions.

hi gingersnap...yes Harper's henchmen are a scurvy bunch. They would have to be to work for him. And when the history of these dark times is written, they will look really really bad. At best idiot sheep, at worst shameless collaborators...

hi Grant...I would not go as far as calling the Harperites Nazis, but they certainly are an extremely dangerous group of right-wing extremists, who if they are not stopped will lead us to disaster, and the possible destruction of this country...

hi anon...no, I admit it. I don't have any respect for Great Leader. Not after what he has done to this country and its democracy. but don't worry about the bum wipers. The whole Con caucus will be lining up for the prilege of doing that... ;)

hi e.a.f.....well you may be right. Maybe he will dig in his heels and take the whole party down with him. If the police don't arrest him first. But remember his own Cons are growing increasingly restless, Jason Kenney really wants his job, so he may face a party revolt. If that revolt is big enough he may decide as Walkom suggests, declare victory and leave. How he could declare victory is a mystery to me. But however way he goes is good enough for me...