Stephen Harper and the Revolt of the Veterans 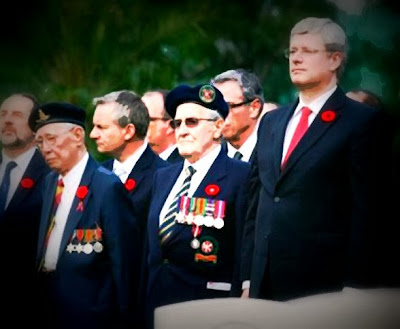 There couldn't be a more powerful protest. Or a greater slap in the face.

For years he posed as a patriot, for years he strutted around boasting he was the best friend the Canadian military ever had. For years he could count on the support of most veterans.

When the clock strikes 11 a.m on Remembrance Day in Chilliwack, B.C., retired Air Force captain Claude Latulippe will be at the local cenotaph paying homage to former comrades and to the many other Canadians who gave their lives for their country.

But, when it is time for Mark Strahl, the local Conservative MP, to lay a wreath, Mr. Latulippe and other veterans will face away.

Now many of them will be turning their backs on him and on a Con regime, that would treat them so miserably.

In fighting a case brought against the charter by a group of severely disabled veterans, the government is arguing that the Crown has no sacred duty to care for veterans – a position that has outraged former military personnel. Veterans are also upset that some disabled members of the military are being dismissed before they have put in the 10 years of service required to qualify for a pension.

And betray them so shamelessly, as they have betrayed this country and its values.

And that's all I want to say about that, because I'd rather not talk about Harper and his Cons today, they disgust me so much. They dishonour the day itself.

Except to say that their time is truly running out.

And today is a day I'd rather remember them... 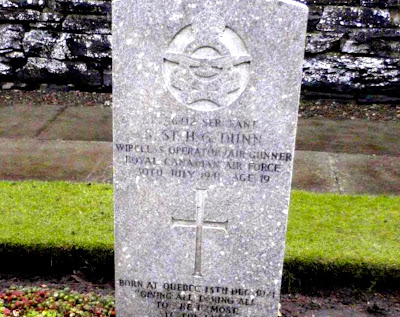 Like this young Canadian who lost his life on a training mission when his Wellington bomber crashed in the highland hills in the north of Scotland.

And whose grave along with those of others I try to visit, every time I return there.

Like these in the grounds of a 700-year-old ruined abbey not far from where my parents live... 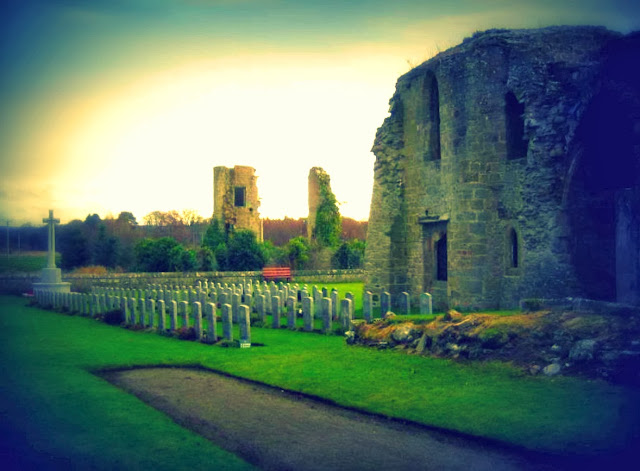 So far from home but never forgotten. 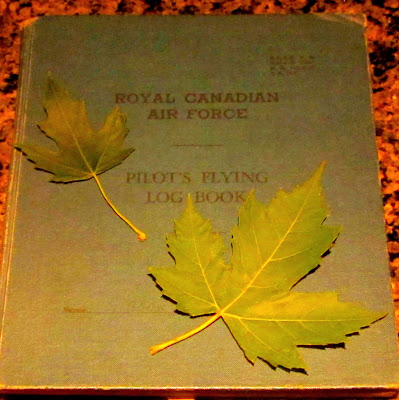 One of my most precious possessions, and in whose pages I have pressed some leaves from the fallen tree that inspired the Maple Leaf Forever.

Because like so many others he risked his life to keep this country free. And he would be disgusted to see it surrendered so easily to right-wing extremists like Stephen Harper or Rob Ford. Or infested with teabagger traitors and clapped out collaborators. As am I.

So although it is, as I said, a day to remember the dead and the living.

We go overseas, we fight for our country, we do what we’re asked and when we come home it’s like we have to start another war all over again just to get the medical help we need...It’s been going on for years and years and years and it’s time for it to stop.”

And those who are still suffering so horribly at the hands of the ghastly Con regime.

On this November 11th in the year 2013 I also believe it's a day to rededicate ourselves to the grand struggle to bring down that regime.

For so many didn't sacrifice their lives to see it become Harperland.

They died for a country called CANADA... 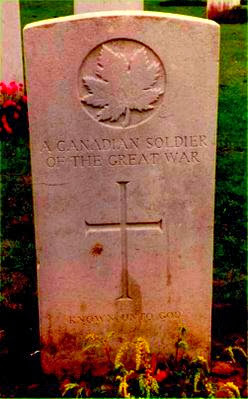 And now in a peaceful but powerful way we must return it to them.

For anything less would be to betray them as miserably as the Cons have.

They did their duty.

I can't imagine any of the so called Conservatives having the gall, to show up at any of our Armistice Day Services. Harper was Policy Chief of his, Northern Foundation of 1989. He had hired Wolfgang Droege and his Heritage Front as, security for Preston Manning.

Decent Canadians put our old and new Veterans absolutely first. We want them cared for, come hell or high water. Canadians have always been proud of our military, right to this day and forever.

Lest we forget....They did their duty

Your grandfather would be very proud of you Simon. You are doing your duty and we thank you.

Simon you are a Libtard, and guilty of all the seven deadly sins of a libtard
http://thinkingaboot.blogspot.ca/2013/11/seven-deadly-sins-of-being-libtard-1.html

Simon,
My grand father WWI Austrian Kings own mountain troops - 1st Kaiser Jäger Regiment, My father a submariner in the British Royal Navy WWII, my mother in the Dutch underground as my aunt. My uncle Royal Dutch Marines captured by the Germans at the outbreak of WWII and served as a POW. The whole of the European side of my family was affected negatively by that conflagration . The entire con party and especially Harper and his henchmen, his cabinet disgust me. They have never been to war and one second they are glamorizing the soldiers whom deserve respect and the next cutting off veterans benefits that the vets have earned and then throwing them out in the street.

They have gall julian fantino under the guise of "salute the soldiers" commandeered my and millions of others computers today. They in the name of Veterans Affairs hacked an applet on to my screen as I was working and no way to get rid of it unless you either twitted them or lost your page by turning it off. How dare they politicize this event and then blame the vets for politicizing who turn their collective backs on the cons hi-jacking the event. The cons each need an IED shoved up their asshole for their outright classless up-staging of this day.
julian demanded a twitter so I gave him one:


"@VeteransENG_CA Screw you for politicizing this event and hacking into my computer and giving me no choice. You have never been to war yourselves, my whole family has, you lazy COWARDLY conservatives."

Who doth tarnish this name, the biggest poly-porn-star Canada has ever seen, but harper himself, white trash is he and his ilk!

hi anon...I honestly thought that after eight years of this hideous un-Canadian regime nothing the Harperites did could shock me. But the shabby way they are treating veterans is so disgusting it's almost beyond belief. I've never mixed politics and Remembrance Day before, but I felt I had no choice.
And more power to the vets for leading by example. We should all turn our backs on this monstrous government and deman something better and more Canadian...

hi anon...well I hope he is. If he was half as proud of me as I am of him I'd consider myself lucky and more than satisfied. And after we all do our duty and make sure that everyone votes in the next election I'll settle for being proud of my country again...

I asked my father, a child pilot in 6th Bomber Command, why he did not wear a poppy. He told me that he did not need to wear a poppy to remember. And that is the reason I do not wear one.

hi Steve....Wow. Your family does have a proud military record. And I thought my clan's 500-year history of communal slaughter was impressive. ;)
Seriously though, I understand where you're coming from and I share your outrage. It really does take some gall to first use the military to make themselves look good, and then betray veterans in such a disgusting manner. Honestly, how low can they go? But then as you point out, none of their leaders have any idea of the reality of war, they're all poseurs. And after Great Leader himself, there is no greater poseur than Julian Fantino. When I saw him on TV today dripping with some kind of decorations, like he was a veteran, I felt like throwing something at the TV. I mean really, have you ever seen anything so ridiculous? I'd laugh but it's too tragic. I have two friends, one in Britain and one in Canada, who suffer from PTSD so I know how devastating it can be for them and those who love them. And all I can say is that the Cons have no moral compass, their actions are bestial and totally un-Canadian, and I can't wait for the happy day when we are finally rid of them...

hi anon...I don't judge people on whether they wear a poppy or not. Especially not when your father served in Bomber Command. For I can't imagine a more terrifying job than flying a bomber over occupied Europe. I love planes, and I like to think of myself as reasonably brave. But if I had been one of those incredibly young flyers in those flying coffins, my knees would have been knocking together so loudly the Nazis would have heard us coming fifty miles away. The only reason I buy three poppies, one for each grandfather and one for myself each year, is that it does provide some money for impoverished veterans to buy stuff like glasses, which if they had proper pensions they would not need. And of course because I keep losing them. ;) It's not what's on your chest that counts, but what's in your heart...

Whoops, my father was a pilot in the Canadian 6th Bomber Group of Bomber Command. The 420 Snowy Owl Squadron, if that means anything to anyone. And the war was, as Kurt Vonnegut said, a children's crusade.

I may not wear a poppy, but I always donate. The way that the Canadian government has treated our veterans, especially the kids who fought in Serbia and Afghanistan, is shameful and disgusting. They are entitled to a meagre donation from a fellow citizen.

And now whenever I think of the Harperites, I think first and foremost of their disrespectful treatment of our veterans.

Thought you might enjoy this Remembrance Day special written by the departed and dearly missed..BC Mary..Mary Mackie..

hi anon...I completely agree with you, the way the Cons have treated the veterans of the Serbia and Afghanistan missions is simply disgusting. The cheapness and the lack of humanity beyond belief. And I hope they pay for it in spades in the next election...

hi Grant....thanks and thank you for that lovely story. It must have been quite a scene, and I do love horses...and donkeys. ;) It's a funny thing about Remembrance Day. For a day about war and tragedy, you do get to read some heartwarming stories...

Just when you thought Harper's Cons couldn't be any more repulsive, they are.