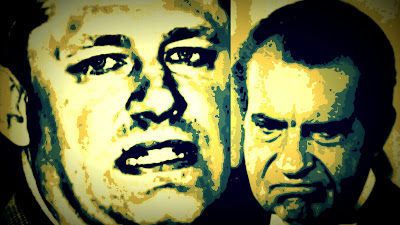 Well since nobody believes what Stephen Harper and his Cons have to say about the Senate scandal, because they've lied about everything for eight years.

And nobody believes anything the Con senators have to say because they've been revealed to be nothing but stooges of the PMO.

Today the Harperites tried something different eh? They sent out their chief flak Jason MacDonald to make a new and outrageous claim:

Good to go didn't mean let's make a deal. It meant do what you must to force Mike Duffy to PAY.

MacDonald said when Wright and Harper met that day, Wright sought approval to “compel” a stubborn Duffy to repay his contested housing expenses – at that time estimated at only $32,000.

“So Nigel goes back to the Prime Minister and says, ‘We’re going to go back to him again and tell him he has to repay it, and he’s not going to like that, he’s going to resist it and he’s going to fight it...’

And how did they plan to force Duffy to pay, while trying to cover-up the scandal? Take him to court? Threaten to break his legs? Tie him to a table with half a ton of PEI oysters just out of his reach? Oh no, nothing like that.

When asked how Wright proposed to “compel” Duffy to repay, whether there was some sort of ultimatum attached, MacDonald said it was just telling Duffy to repay.

Because that's how the Con mob operates eh? 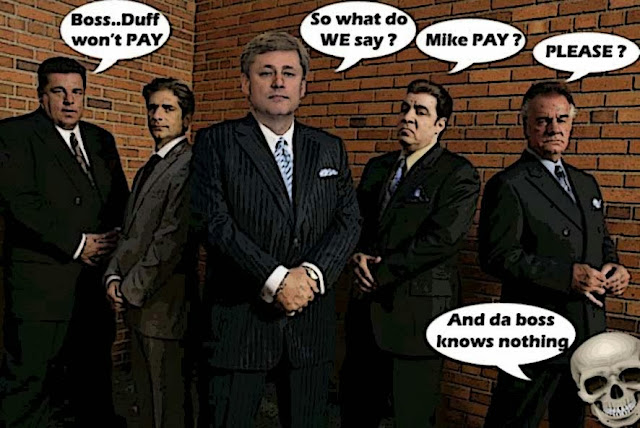 But unfortunately for Boss Harper this new version only takes us back to the same old question. The one him and his PMO gang can't answer no matter how hard they try:

Why WOULD Nigel Wright need to get the good to go from Stephen Harper to TELL Mike Duffy to pay back the money he owed... with his OWN money?

And leads me to ask these obvious questions:

(1) Does Great Ugly Leader take us all for FOOLS?

Wright’s version, revealed in e-mails and interviews obtained by the RCMP in their ongoing investigation, suggests Wright went to Harper with a different, much more elaborate scenario that included covering Duffy’s expenses.

In exchange, the party would repay him for the outlay, Duffy would be spared any further questions about whether Ottawa or PEI was his primary residence, and he would be withdrawn from a Senate-commissioned audit.

When is a deal not a deal, a cover-up not a cover-up, and a crime not a CRIME?

(2) How does the PMO gang explain the role played by the Con's chief bagman Irving Gerstein? 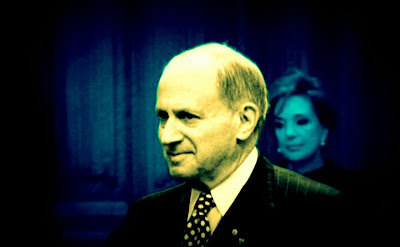 The 80-page RCMP court file showed that Gerstein approached a contact he knew at the firm Deloitte to ask about the audit they were doing on Duffy’s expenses for the Senate. They wanted the examination of Duffy’s residency to be declared moot as soon as he repaid his expenses, which was part of Duffy’s demands.

And of course, the most obvious question of all. If all these Cons were in the know...

How can Stephen Harper still claim he knew NOTHING?

NDP Leader Thomas Mulcair told reporters Sunday that MacDonald was “talking nonsense” when he said Harper did not know about the Duffy deal with PMO. “Of course everything points to Stephen Harper knowing full well what’s going on his office,” said Mulcair. “He’s a control freak and it’s simply not credible that every single senior member of his staff was involved in this but somehow he knew nothing of it.”

And the answer to all of the above questions is that the reason the Cons can't explain anything, or lie their way out of this scandal, is because the evidence is too damning.

Because anyone who reads that affidavit and all the e-mails, as I have, and reads how the Cons frantically tried to cover-up the scandal from the moment they hit the Duffy iceberg, including this priceless exchange...

Which I intend to frame and hang on a wall in the washroom. So I can ...um...relieve myself laughing eh?

Anyone who reads all of that, and is then asked to choose between these two versions of reality:

A) Nigel Wright meets with Harper and conceals the details of an agreement with Duffy, but then tells other staff in the Prime Minister’s Office that the PM has approved the deal.

B) Harper was informed of and approved a deal, or parts of a deal, that could turn out to be criminal.

And because Stephen Harper was ultimately responsible, he must be charged, and either resign, or be removed from office, as soon as is humanly possible.

Because that day in February, when he gave Wright the good to go, was his fatal Nixon moment... 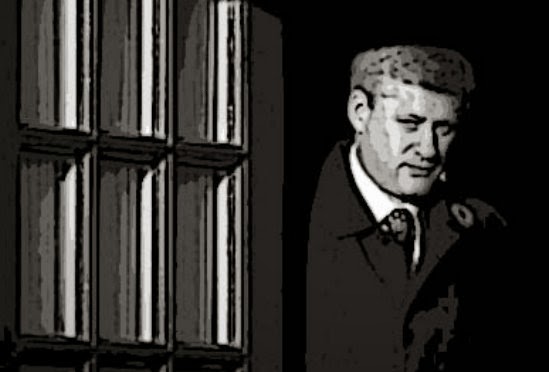 The moment when his amoral behaviour, his tendency to lie compulsively, his belief that the end justifies the means, and his habit of fixing problems with money, all came back to haunt him. Or bite him.

Just like Nixon, who also had a list of enemies, but in the end, just like Harper, was his own worst enemy. And was brought down by a cover-up.

Yup. He may twist, he may turn, he may lie over and over again. But he will not escape that moment.

And in the end, like Nixon, he can only blame himself... 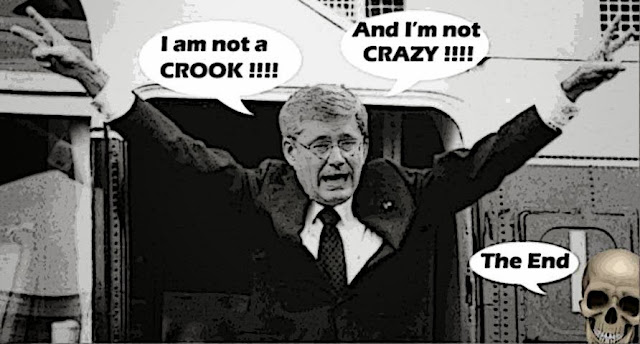 It’s time to roll out the “Let’s Move On” bandwagon. It seems to be working for Rob Ford. Take a look at this one:

Time to move on from the Senate scandal

“Harper has plainly said he did not know of, or approve of, a plan by then chief of staff Nigel Wright to cut a $90,000 cheque to cover Sen. Mike Duffy's housing expenses. ….

“Mainstream Canadians have already moved on.”


Well, as a regular mainstream silent-majority-type Canadian idiot, all I know is: that’s good enough for me. The Prime Minister wants me to start pretending I’m reading the next page.

On the morning that the editorial appeared I sent these comments to another blogger:

“If he hadn’t resigned, President Nixon might not have been convicted nor even charged with any offences associated with the Dirty Tricks, Watergate, or their cover-ups. But public understanding of his deceptions, obstructions and dishonesty would have been sufficient to cause his impeachment. Not only do we have no such mechanism in Canada, but I would bet there are few members of Harper’s caucus or other support teams who are of either the character or owning of sufficient courage to advise him to step down, as senior Republican Senators did Nixon. They don’t need to: Harper’s party has no honour to maintain; and our system demands, while our citizens expect, neither acknowledgement nor apology. As a matter of fact, the most important operating directive is, ‘Never apologize.’

“Harper could simply add a Mulroney smirk to his standard grin; look us straight in the cheeks and say, as in effect Mulroney did, ‘Prove it.’ His supporters would then say, as many of them already seem so eager to, ‘Let’s move on.’”

Duffy, Wright, et all pictured above, 12 in all, remind me of another story, the last supper. Here's hoping harper gets crucified over this, we need a cross big enough to accomadate harper's ego and beer belly, some barn-pole nails and we're set:-)
'

Harper as his favorite henchman, ex BC Liberal Premier Gordon Campbell, will have to watch his back, for the rest of his life, as Harper will. Neither Campbell nor Harper ever announce their visits to BC. They sneak in and out of BC, as fast as they can. BC citizens have forgot nothing when, it comes to Campbell and Harper. BC citizens still want Campbell in prison for, his theft and corrupt sale of our BCR. Nor have the people of BC forgot about Campbell and Harper's plot of, forcing the HST onto the BC citizens.

Do not bank on the BC people, ever forgetting Harper's treachery, nor Campbell's. Christy Clark is Harper's mouthpiece these days. She is just another Harper degenerate in, Harper's long list of degenerates

He still is the P.M. and the cons still got two seats tonight. Not a good thing. Whatever we believe, we need the charges to be laid by the RCMP. Until that happens it is business as usual for the slimers.

Campbell got away with "giving away" a railway and Harper will most likely get away with what he has done. He appointed Duffy, to represent P.E.I., when Duffy didn't live there. He just had a vacation home. Duffy simply seized the opportunity to make some money. If he hadn't been caught, he'd still be at it and still fund raising for the slimers.