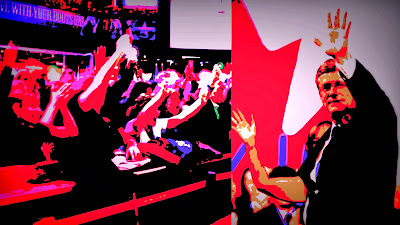 I have never had any doubts about the real nature of Stephen Harper's Con regime.

Not with a leader so crazed and evil, and followers so fanatical.

But it's still good to see people like Andrew Coyne describe their bizarre convention as a creepy thing.

If there is one image that defines last week’s Conservative convention, it is surely that of a closed door. For much of the convention, that was all reporters were permitted to see of it.

It was all part of the weird, unsettling vibe that hung over the whole event. (We’ve grown used to seeing prime ministers sealed inside an impenetrable bubble, but a whole party?) That reporters were constrained from doing their jobs is perhaps a side issue. But that a democratic political party, at its national convention, would go to such lengths to hide from public view is just a bit creepy.

And the party as a CULT.

When your only principle is paranoia — when your central organizing proposition is that “everyone is out to get us” — when every criticism is merely confirmation of the essential rightness of that proposition, and every deviation is evidence of disloyalty, then you are less a party than a cult.

For what else could it be when most Canadians don't trust anything Harper says? But for his rabid followers he can do no wrong. 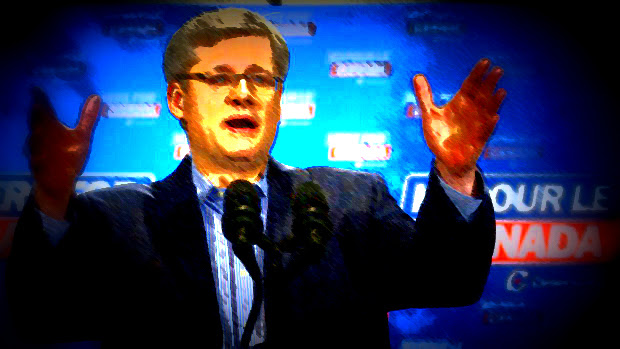 Conservative delegates left Calgary with their trust and pride in Prime Minister Stephen Harper intact, despite polling numbers that suggest many Canadians aren't satisfied with his response to the Senate scandal.

Which would be depressing indeed. Except that a cult doesn't share its true views with outsiders. Harper needs more than their support to win. And those who would replace him are coming out of the woodwork.

There were delegates here who swear they are sure Harper will still be leading this country in 2017, when we are celebrating the 150th anniversary of Confederation. But there just as many here who were keeping an eye on the omnipresent Jason Kenney, the employment minister who appears to be building a huge lead in an undeclared race for the post-Harper Conservative leadership.

Foreign Affairs Minister John Baird has never been thought to have designs on the future leadership, but some of his allies are now saying that may not necessarily be the case.

All positioning themselves to take a run at his job.

Which tells you more about the true state of the Con regime, than does the apparently blind faith of his followers.

For this is also true about a cult. When its followers begin to lose faith in their leader, the temple he has built around him can collapse as suddenly as a house of cards.

And I'm pretty sure that's what's going to happen here.

If Harper isn't able to regain the trust of more Canadians over the next few months, that faith will be further eroded.

The knives will come out... 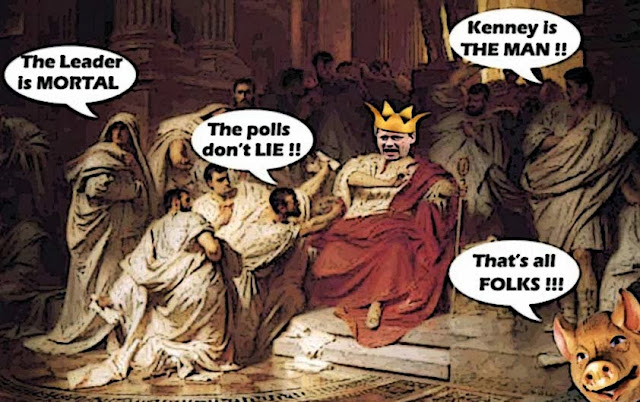 And the Con regime will be torn apart.

Yup. Stephen Harper may not know it yet.

But he will not escape his fate.

And his days are truly numbered...

I am sure there are "Canadians rolling over in their graves"!

Leader Jason Kenney? That will be hilarious. As one of the deans at the catholic college Kenney attended in San Francisco (but did not graduate from) remarked: 'Kenney is trying to take the school back to the '50s - the 1550s'.

hi anon...I'm sure there are. Who could ever have imagined we would end up with a cult running our country, amd a maniac as our leader. It's like a really bad nightmare. But judging by the way things are going, it looks as if it's going to be over sooner rather than later...

hi anon...Thanks that's a great story. I knew his chastity vows had to come from somewhere. And I fear that scary condition has led him into a state of delusion. For although he is the leading candidate to replace Harper, believe it or not. I haven't the slightest doubt that if he does become leader, it will mean the end of the Reform Conservative Party. So needless to say I'm cheering for him wildly ... ;)

Closing the doors to the convention and not having the press there was a good strategic move on the part of the Conservatives. had the media been able to cover it, much damage would have been done to the Con's image. it would have shown the other side. They voted for "right to work laws" and the little matter of abortion came up. Many who came to the mike when these things were debated would have made remarks which are inconsistent with what stevie has been telling the Canadian public and the public image the slimers wish to project.

Maxine Ber. You have got to be kidding. The idiot who left important papers at his girlfriends house. the girlfriend who used to date a biker? That Maxine? Don't think CSIS would like that one at all. Biard actually could make it as leader of the cons and win an election.

We can only hope Canadians do not continue to vote Conservative or we just might still have them all with us in 2017. Quebec will have seperated and some of us will have moved there, French or no French language. It maybe more consistent with what we know than a country run by the cons.