Breaking: The Ford Nation is Dead !!!! 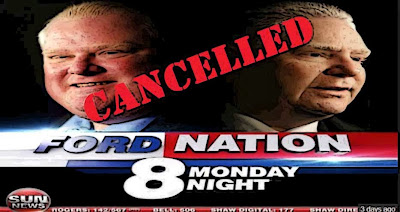 Well at least on Sun TV.

Which must have Rob reaching for a drink, and Doug seeing yet another media conspiracy designed to make them both look bad.

Or blaming the POLICE.

Asked about police surveillance, the Fords admitted they still believe they are being watched by Toronto Police. "They think I'm stupid," Mayor Ford said. "I knew these people were following me.

Coun. Ford said he still believed a surveillance car was parked outside Deco Labels -- the Ford family business -- on Saturday night. "We come out and bang, the same car sitting there every night," he said. "It's politics, Rob. They don't want these other guys, they want you. That's what it's about. The resources are going to try to catch you."

But since it took the dynamic duo FOREVER to tape the show.

It apparently took five whole hours of human labour to record the one hour show, and then eight hours to edit into a viewable form. We're just guessing, but it may be attributable to Rob Ford’s inability to construct coherent sentences. And also time eaten up by the presumed team of interns who had to rush in to mop the flop sweat off the Fords with wadded pairs of water-resistant Dockers mobile khakis between takes.

Which must surely be a new record in the history of cheap television... 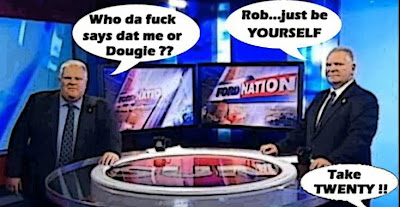 And since some advertisers apparently didn't like to be seen supporting the Ford Nation. Against their will, and much to their surprise.

At least one marketer distanced themselves from the show. On Tuesday afternoon, the official Canadian Tire feed tweeted: “We've learned that a manufacturer(s) using our logo ran an ad on Ford Nation last night. We did not place the ad or target the show.” Its logo had appeared on ads for Rockwell Tools.

I think Kory Teneycke is the one left looking REALLY bad eh?

“It’s by far the most successful thing, from an audience perspective, the network has ever done,” said Kory Teneycke, the vice president of Sun News. But the program would not be produced again.

Or left holding the fish... 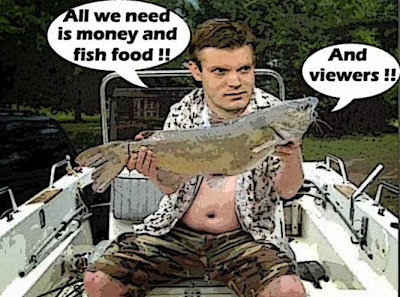 I mean one moment he's calling it Canada's "ultimate reality show." And dreaming of using it to help his former master Lord Harper conquer Toronto.

Now, just one episode later, he's facing a broadcasting future as bleak as the Ford brothers...

Maybe they’re destined to roam the Canadian broadcast media landscape like Caine in Kung-Fu, ruining different radio and TV stations each week. Or maybe they can just buy bullhorns and yell into each others’ own assholes for an hour every week, which would give the same basic effect as their AM 1010 radio program and Sun News show, without bothering anyone else.

They don't throw anything away. They can't afford it eh?

And they still have Ezra Levant.... 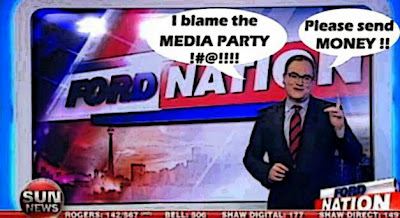 And since most of their fifty regular viewers are too old, or too drunk, or too dumb to change the channel.

Finding an even CHEAPER program to fill that slot .

Shouldn't be TOO hard...

We all deserve some comic relief! And thanks for adding to theglee with today's blog.

I love that sweet dancing puppy! And the human must have also put in a lot of effort training pooch, whom he obviously loves. How can you even compare them with the Brothers Ford?

I'm suprised they cut him loose so soon. Perhaps to save Alberta imbarassment.

hi anon...thank you. In the midst of all this madness I feel the need for some comic relief myself... ;)

hi lagatta...I certainly did NOT compare that sweet dog to the Ford Brothers !#@!!! I simply said it would be an even cheaper act than the unfortunate FORD Nation. But I guess I should have added that it would also be BETTER... ;)

hi anon....I know there are all kind of theories going around, but I'm actually inclined to believe Kory Teneycke's sad explanation. I know a bit about television myself, and no TV station, especially a shoestring operation like Sun TV, could afford to spend so much time on a simple talk show. I can only conclude that the taping was a disaster, and I can wait until some shady characters offer to sell the parts that had to be cut out, because they must be REALLY bad.... ;)

advertisers most likely would not have wanted to see their ads during the show. It may be that the harpercons didn't want the show either. A lot more people would have seen the Ford brothers doing their thing for an hour. It would have left a lot of people wondering why a P.M. was keeping company with those two. Face it, Ford makes the 3 senators look good, when it comes to scandal.

Could the fords be even too stupid for Fox North? I'm sure the cutting room edits will surface one day for all to see.

Wow, I was only saying here a few days ago that I would not be surprised if Sun TV were to pull the show once they realize that it would actually help open the eyes of ignorant voters and lose Dear Leader more votes.

I suspect Dear Leader must have got on the line to Kory to can the show. Especially with Jason Kenney now obviously after Dear Leader's job and yelling for Robbie's head from the rooftops.

Guess Dear Leader must have realized that by giving these two idiots the opportunity to further unravel in public, it would actually be helping Kenney's cause. So the show is history and Kory is left justifying why it had to go.

I'm willing to bet it had to do with unhappy advertisers. Money talks, and that's likely the only language Kory understands.

hi e.a.f....I think it was most probably an advertising question. They can't afford to antagonize any of them, especially big ones like Canadian Tire. But the taping must have made even Kory, who doesn't know anything about TV, realize it was a horrible mistake. Because if they had to spend five hours taping and then eight hours editing to get enough coherent stuff to make an hour of TV, it must have been clear that the whole idea was insane...

hi bcwaterboy...I think it's safe to say that, except for Kory Teneycke who hired them. Because this one will live forever in the annals of legendary bad TV stories. Especially if as you say the stuff they had to cut out ever surfaces. Because that will be the blooper reel of blooper reels. I'd empty my bank account and go looking for it, but I don't have enough money, and the Ford gang is still on the loose and still dangerous... ;)

hi anon...in Harperland anything is possible, but I still think the main reason was economic. They couldn't afford to lose advertisers especially big ones, because the place runs on a shoestring budget and is STILL losing money. Teneycke should have known that when every organization from the Argonauts to the company that makes Ford's vodka have been putting out statements dissociating themselves from him, other companies might feel the same way.
And of course since the Fords don't have much of a vocabulary, and just keep repeating their own talking points, the show promised to be a real stinker, and would have been cancelled sooner or later. Poor Kory.... Citizen Kane he isn't... :)