Michelle Rempel and the Con War on Women 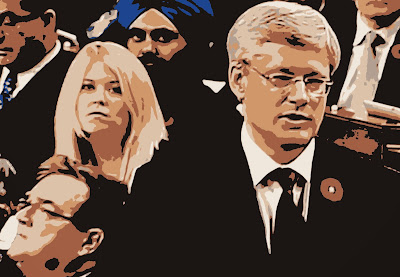 As I've mentioned before, I may be naive ,but I can't help feeling that Michelle Rempel is a cut above most Cons.

I don't blame her for causing a ruckus on Twitter the other day, by taking a shot at this fluffy event.

And I don't approve of the way some on our side went after her.


Because she deserves better than that.

But let's be clear, as her Great Leader likes to say, if Rempel wants to champion women's rights she's in the wrong party.

Because how can she work for a leader who declared war on women from the moment he came to office?

By ordering that the words "women's equality" be erased from thousands of government documents, and shutting down Status of Women offices all across the country.

A man who belongs to a wacko church that believes that women should be "subservient." A man who has always treated the women in his caucus with less respect than he treats the men.

And a man who killed a national daycare program, bragged about that recently in his disgusting convention speech.

"We took money out of the hands of the lobbyists, academics and bureaucrats, and we gave it to the real childcare experts — their names are Mom and Dad," Harper said.

Just so he could please his rabid base who believe a woman's place is in the home, or in the kitchen barefoot and pregnant.

Even though killing that national daycare program has been an absolute disaster.

This is the current reality in Canada: Women race to get their names on waiting lists when the stick turns blue on the pregnancy test, fingers crossed that they’ll win the future “daycare lottery” and get a spot that makes it possible to work, while being assured that their children are safe.

Young families, especially in cities such as Vancouver, where the cost of care is highest in the country, feel they are being priced out of parenthood. Businesses lament that that they are losing A-list employees who don’t return after parental leave because the stress of finding good child care wasn’t worth it.

It has has placed an even greater burden on the backs of women, who still are the main child care providers. It's discouraging young couples from having kids.

And it has left children tragically vulnerable in the hands of unlicensed operators. The death of two-year-old Eva Ravikovich brought national attention to the hazards and inconsistent oversight of unlicensed daycares in Canada.

Eva died on July 8 in an unlicensed home daycare in Vaughan, Ontario. Though the exact cause of death is still unknown, authorities found expired and rotting food in the allegedly overcrowded daycare, including several items that contained listeria. Other health hazards included kitchen utensils and toys that had not been properly disinfected.

And that's not all. For Harper is also the man who has smacked down any proposal to hold an inquiry into the fate of hundreds of murdered and missing aboriginal women.

And who to please the religious fanatics in his base has refused to fund programs that provide safe abortions for poor women in developing countries. 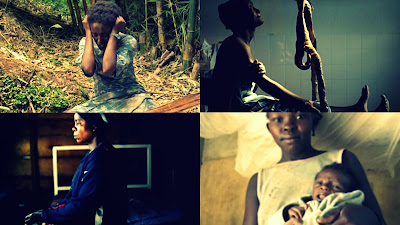 Even though it could KILL those women, and cause their families to starve.

And all of the above has done more damage to the cause of women's rights than Justin Trudeau's fluffy event ever could.

Still, I'm not giving up on Rempel. I still think she has the potential to be better than most Cons, and one day in a different kind of party, even a good minister and a good role model for young women.

But none of that will happen as long as she works for Stephen Harper, an evil thug who is just using her like a dish rag, by positioning her over his right shoulder like a shop window mannequin... 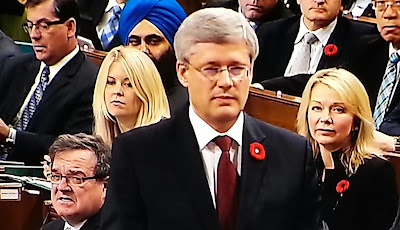 To make his corrupt party look like it's new/nouveau, or a party where women are welcome

When it's still a party of reactionary old white men, he's the most disgusting misogynistic leader this country this country has ever seen.

And until the day he's gone, or the day she dares to defy him, anything she says about women's rights will be nothing but hollow words.

And she will just be just another member of a rotten regime.

Or just another Con monkey... 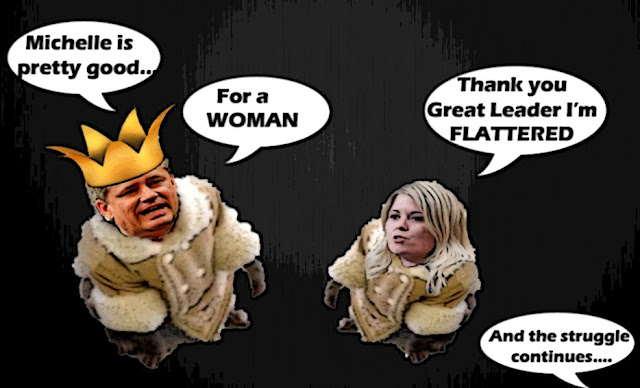 Simon, perhaps Ms Rempel should have looked into a Conservative Party women's fundraiser called "Girl"s Night Out" held earlier this year in Halifax. The artwork advertising it featured big red smooching lips. Many photos were posted of the girls posing with the firemen who were in attendance...some rather suggestive poses. However, it was a private function, an event that I, as a woman, find distasteful, but it is really none of my business. I didn't have to attend. So, I wonder if she objected to this fundraiser. It wouldn't have met with her standards or are her standards selective?

Nor was the event in Toronto any of Ms Remple's concern. It was organized by twenty Toronto business women to raise money to help more women enter federal politics. Much more tasteful than the one described above, I may add. Possibly because it wasput on by a political party that Ms Rempel's party takes great glee in mocking, and also because a high profile person was going to be in attendance, Ms Remple thought she could score some cheap political points....on instructions from dear leader. It appears to have backfired.

Furthermore, I am woman who has fought the hard difficult battles for women's rights since the early 1970's. I take great offense that a woman who allows herself to be used as a prop by this vile PM, makes baseless accusations of sexism. She could be doing so much meaning, quality work.

(Another of the tragedies of Harper's years...all these young people with so much potential who have had to sell their souls to him. )

Once again, Simon . . . you got it wrong. If she wasn't the kind of mindless harpobot that he requires all of his wimmen to be, she wouldn't be in that position. I can appreciate your altruism but you gotta remember ; a scorpion will always sting. It's in their nature or else they'd be something else.She is exactly what she is and where she belongs for the aforementioned reason

Simon connect the dots! How much help do you think little Stevie is giving the most noble of causes, the end of the world as we know it.

stevie slime and his slimers have never stood up for women's rights, most likely because he and his feel threatened by women. when you just aren't that talented, women are just a big old threat.

hi anon... Uh oh. Big red smooching Con lips? Now I'm really going to have nightmares. ;)
Seriously though...I think the Trudeau fundraiser could have been marketed better. But as you point out it was for a good cause, and I thought Rempel made too much of it. And as I pointed out she's hardly in the right party to defend women's rights. I don't know how any self respecting woman could belong to that party, just like I can't understand how any gay guy like John Baird could belong to it either. And yes no doubt Michelle must be getting high fives from the gang in the PMO, because as we know any attack on Justin Trudeau or the NDP's nonexistent carbon tax gets you a fifty point bonus, and a privileged place in the long line to kiss Great Leader's ass. Because I'm so desperate to see MANY more women in politics I'll give Rempel one more chance to redeem herself, but that's it....

hi anon...look you may be right, I have to admit I haven't checked Rempel's background so I don't know much about her deeply held views. I thought she looks more 4H Club than Ayn Rand Club, and I was impressed when I saw that unlike the other Con seals she doesn't applaud wildly or rise to her feet in the Commons whenever Great Ugly makes some cheap partisan. And it may be because I'm altruistic, believe in the power of redemption, and that at this stage only women can save us, that I haven't been as harsh on Rempel as I am on the others. But don't worry if I'm wrong I'll admit it, and make sure she pays for my embarrassment ... ;)

hi Steve...I must admit that at this stage I have no idea what's going on in Harper's head, or which voice is in charge. All I know is that some of those voices must be really foul. Great Weirdo has always enjoyed destroying things rather than creating them. And that if we don't make absolutely sure that he is defated in the next election it will be the end of the world as we know it...

hi e.a.f. .....since Great Leader has so many documented bad qualities I don't feel I have to invent any others to add to the list. And I can't know for sure whether he is a misogynist. But the fact that the very FIRST thing he did was order that the word "women's equality" be struck from the Status of Women documents strikes me as bizarre and disturbing. And everything he has done since then has only confirmed my belief that something is not quite right, and that he has some kind of hangup when it comes to treating women with respect. His inner circle is made up exclusively of men, and women who screw up get treated worse than the guys. So if it walks like a duck and quacks like a duck....