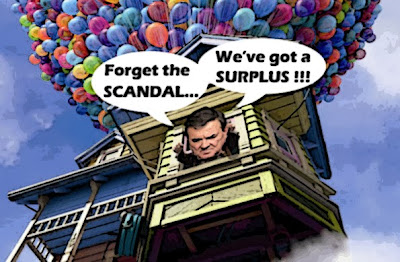 Well in case you thought that the Con regime was nickel and diming veterans, and killing good jobs all over the country, because they absolutely HAVE to slay the deficit.

Or as Jimbo Flaherty warned us we could find ourselves in a big black hole, the economy is fragile, the global risk is huge etc etc.

The federal government will not only balance the budget in 2015, it will run up a sizable surplus before the next federal election, says Finance Minister Jim Flaherty.

Which of course is extremely convenient, coming as it does in the middle of a sordid Senate scandal. Just when Stephen Harper desperately needs to change the channel AND find the dough to bribe voters in the next election.

But leaves me wondering whether I should take the $500 bucks I've managed to save out of my microscopic interest bank account, and put it under my mattress.

Because as we all know little Jimbo has been wrong before eh? 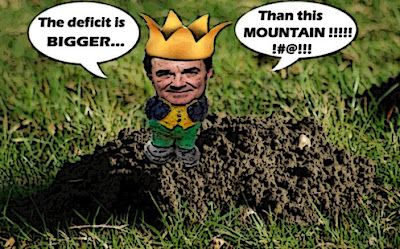 Last week, Flaherty reported Ottawa had realized a $7-billion windfall in the just completed 2012-13 fiscal year, reducing the deficit to $18.7 billion, rather than the previously projected $25.9 billion.

Especially since the Parliamentary Budget Office, as usual, isn't as optimistic as Flaherty and his Big Business friends.

Slower economic growth next year and lower-than-projected commodity prices are the key reasons for the tempered fiscal projections, says the budget office report.

"As a result, PBO's outlook for nominal GDP -- the broadest measure of the government's tax base -- is lower, by $25 billion annually, on average, than the projection based on an average of private sector forecasts."

Chantale Hebert suggests the Cons..... *Gasp*..... might be playing politics.

It is possible — as the NDP has suggested — that the government’s rosy fiscal forecasting involves a large dose of opportunistic bluster. Or that it is looking to stiffen its own spine as it embarks on a new round of spending cuts. One way or another there is enough uncertainty on the economic horizon to potentially play havoc with the best-laid economic plans between now and 2015.

Given that, one can question whether Flaherty would venture as far out on the surplus limb if his government was not at such a loss to play up what it perceives as its best selling points.

And somebody forgot to tell Great Desperate Leader... As an aside, the word “surplus” was absent from Harper’s otherwise comprehensive keynote speech to his party’s convention earlier this month.

Gawd. Does nobody tell him nothing about ANYTHING?

Because as even Canadian Business admits, he was also clearly on another wavelength during the recent Throne Speech. Or working on a different plan.

Last month’s throne speech was almost fire-breathing about the need to contain spending, announcing yet another round of restraint by way of an internal spending freeze, other targeted reductions, a balanced budget bill, and continued war on the public service in terms of going after sick-day benefits and pay levels. There was also renewed talk of selling assets.

So why are the Cons cheating veterans, and planning to go after such things as pensions and sick pay, or sell off public assets when they now apparently have a SURPLUS?

And which Con artist do you trust ? The ghastly organ grinder? 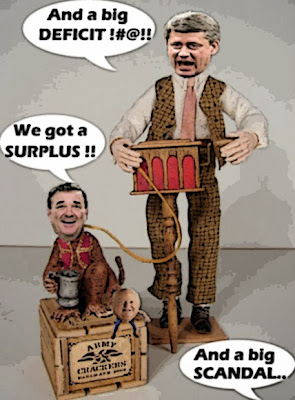 And don't you love this? The economic update will be delivered when Parliament is on a break. So the opposition can't ask embarrassing questions.

In an "intimate meeting" with the Edmonton Chamber of Commerce.

And give little Jimbo Flaherty.

As you know, Jimbo's expertise as a Master Cook is already legendary. He was able to cook up a "balanced" budget in Ontario that upon examination turned out to be a $6B deficit after he and his buddies, Ernie Eves and Mike Harris, were turfed from office. Remember that the Eve/Harris government was selling hydro to Ontarians at 4 cents per KWH while importing it from down south at about $1 per KWH. They were the ones who left Ontarians with the $20-30B debt of OEFA in regard to the hydro restructuring. And Hudak was a junior minister in that team. Not difficult to see why Hudak is having difficulty convincing thinking Ontarians he should be Premier.

Harper knows that he is in real danger of being turfed, if he doesn't run for the hills as Mulroney did, before 2015. This is the last chance to slash corporate taxes, while giving some crumbs to the ignorant unwashed (fitness tax credits for seniors, etc). So, yes, I think we will suddenly be hearing of the massive surplus that Steve and Jim have managed to cook up for us.

Check out sometime how Flaherty plans to bring about a 'surplus;' Veterans Affairs cuts are only the tip of the iceberg. Anyhow this guy's promises mean nothing. After all he was the guy that promised 'there will never be a deficit on our watch' and then proceeded to set an all time record high one. Now this bozo clown is talking about 'tax cuts' er..vote bribes. With our money. What about paying down the debt? Or building some desperately needed infrastructure? Or increasing the basic personal amount? Why would we believe a fucken WORD from the govt that has increased the national debt by about $25 Billion PER YEAR for the last 6 years, anyway?? Yet these fraudsters would rather bribe votes in 2015 by spending $2.5-billion (a year in lost tax revenue) according to their OWN platform on tax cuts rather than use the money to the national interest.

I fully agree there will be a surplus. There should be, there has been a vast amount of money gone missing. Haven't Harper and his so called Cons been stealing from us, to finance their campaigns, economic and job action plans, which were all bogus?

Does anyone have a clue of how much of Canada, Harper has sold off to Communist China? That is very likely where the money came from.

BC sold down greasy mine shaft.
Dec 16/2012
www.langleytimes.com

BC killing jobs by, bringing in foreign miners from Communist China
Oct 17/2012
billtieleman.blogspot.com

Harper has also signed a deal with, the Communist China Army. Just has to guard the Enbridge pipeline. The Red China Army will guard the High Arctic. Hasn't anyone ever wondered why, Harper is getting rid of our military? He doesn't need a military with Communist China taking Canada over for 31 years.

Is all of this, where Flaherty's huge surplus came from? Do ya think?

My question: is the $3.1 Billion that went "missing" in the spring part of the surplus that Flaherty has now "found". Why did news of this missing $3.1 Billion get dropped? And, how did we suddenly arrive at a surplus. Show us the books, Flaherty!

Perhaps he is drinking out of the same bottle Christie Clark in b.c. is. She is saying B.C. will make trillions in royalties from LNG and create 100K jobs. Old Jimmy thinks we are going to have a huge surplus? is he planning on raising taxes on profitable corporations and increasing royalties, or lord forbid, raise taxes for the 1%ers? If those things aren't in his plans then he must be looking at firing all federal government workers and replacing them with workers from china who will work for min. wage.

The economy is tanking. If jimmy and christie want to tell us otherwise, that is fine, just don't expect us to believe it. How you tell the economy is tanking is check with a charity which had a fundraiser this year and then compare it to their "take" last yr. Many are finding they aren't making as money on the bar, bids on silent auction items are lower, etc. When people have money left they will spent it at charity events which benefit their community. When there is less money coming in, it usually means less money is around, period.

As christie is running her mouth off about all this money and jobs, some one should have her and jimmy check with the food banks across Canada. they are the growth industry. Right about now many charities are starting to raise money and solicit gifts for children, to provide them with a nice christmas. If the country was doing so well, then why do all these charities have to work so hard?

hi anon....although I was lucky enough to miss the Harris years I have heard about Jimbo's $6 billion dollar "miscalculation." With that kind of "talent" I'm not surprised that Lord Harper made him his Finance Minister. I didn't mention it in this post, but I will in the near future, people really need to take a very close look at HOW they are going to get us to a surplus situation, because I'm afraid that it will entail killing jobs and reducing vital services to Canadians. But as I said they could very well be impaled on their own petard, for just like Canadians threw out the Liberals even though they had a healthy surplus, they can do the same to the Cons...

hi wazz....it's clear to me that the Cons are just doing what they always do, put their interests ahead of those of the Canadian people. For so determined are they to find the money to bribe some Canadians, they could very well damage the economy further with their austerity policies. And then of course there is the big question: how far are they prepared to cut taxes, and what will be left of the government and the country?

hi Filcher....I'd rather trust a quack with my diagnosis that trust a Con with our finances.... ;)

hi anon...oh there will be a surplus, the Cons will make sure of that if they have to sell the CBC or rent out the Parliament buildings. But the fact remains, there was no pressing economic need to deliver a surplus by 2015, getting there too soon could cripple our economy, and the only reason they are doing it is for crass and shortsighted political reasons. For which one day they will be punished...

hi anon...Gawd. I had forgotten about the missing $3.1 billion. Honestly, that should have been enough to convince most Canadians that the Cons are either clueless or crooks. Or in my opinion BOTH...

hi e.a.f....absolutely there are signs out there that we have what is called a jobless recovery. Lots of good jobs are being destroyed and replaced with temporary ones that pay less than half as much. So although the unemployment figures look more or less the same, they are actually concealing that Canadians, except those in Alberta, are getting a lot poorer. Which of course is why the Cons are always hiding the figures, so their scams can't be revealed. It has worked for them so far, but it won't work forever. And when Canadians find out how they have been scammed they will not be pleased...