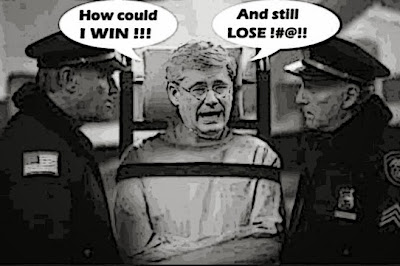 Golly. I can only imagine the state Stephen Harper must have been in last night as he watched the byelection results come in.

Especially the one in Brandon-Souris, the riding that has been in Con hands for half a century.

And although in the end no seats changed hands, I'm sure the Cons were still pumping him full of horse tranquilizer long after it was over.

Because it's not like he had anything to celebrate eh?

Not when he almost lost the eternal Con riding. And not when Justin Trudeau was declared the big winner.

Beneath the surface, however, the byelections have roiled Canada's political waters, suggesting the Senate expenses scandal has badly hurt the Tory government and that Trudeau's Liberals are the ones who stand to benefit.

Because you know how much he hates him. And he must surely know that the Senate scandal can only get worse, and if it could hurt him in Con Manitoba, it could KILL him elsewhere.

Which means that a lot of Cons are probably going to be wondering, even more than they already were, whether Harper is an asset or a liability, and the right man to lead them into the next election.

And you can be sure that Jason Kenney must be agonizing over whether to make his move now... 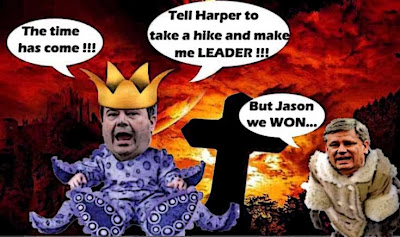 Or wait until the Con ship starts heading for the bottom...

And of course he's not the only Con having those kinds of rebellious thoughts. Or wondering whether Stephen Harper still knows what he's doing.

Conservatives are criticizing the PMO’s alarmingly poor strategy on the Senate expenses scandal and critics say, following last week’s explosive, 80-page RCMP court document with new allegations and details on the $90,000 payment former chief of staff Nigel Wright made to Senator Mike Duffy, it could hurt the party and Prime Minister Stephen Harper.

Because a lot of think he doesn't and many are blaming the new gang of young fanatics in the PMO for leading him astray.

“Every office, particularly where big decisions are being made, needs some grey heads around who have lots of experience who don’t overreact to issues, who when people are losing their heads keep theirs, who calm things down when things get hectic.”

And of course worrying about saving their own skins.

Which means that unless things improve radically in the next few months, Stephen Harper will still have to decide sooner rather than later, whether to resign, or face a full fledged rebellion.

While the young fanatics in the PMO will find themselves fighting off the Senate scandal AND their own followers. Which should drive them CRAZY. Or crazier than they already are.

Which reminds me...since one of those fanatics ,the Con pitbull Jenni Byrne, was spotted personally directing operations in the Brandon-Souris riding.... 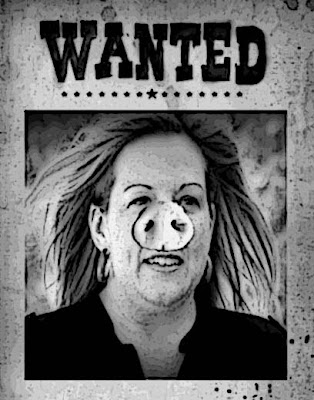 And since she ran the Con campaign during the last general election. You know, the Poutine Election.

Could we please have a RECOUNT?

And a TEN count for Stephen Harper.

Because now he must surely know that he is in BIG trouble.

The Senate scandal can only get worse.

“If Nigel Wright is charged, it is going to be a very serious issue for the Prime Minister to hang on. There’ll be a lot of people within the Conservative Party who’ll be saying, ‘Wait a minute here, you picked this guy. He ran this operation out of your office. You may not have known [about it],’ the RCMP are very clear he did not know about it. This operation was run out of your office, you have to take some responsibility for that...”

The troops are getting restless.

And slowly but surely he's running out of POWER... 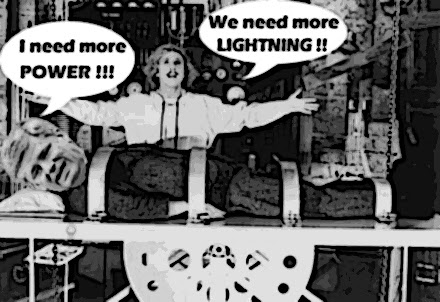 "the rcmp are very clear he did not know about it" How the fuck is that even possible? Even the Keystone Cops got their man and the rcmp can't put 1+1 together and come up with harpie? Oh, yeah. It's a lot easier to spy on citizens and opposition party leaders than do their appointed duties, lest they bite the hand that feeds them.

We does have a wee question tho .. and credit to you and to MoS
for bringin it along .. and the keep on keepin on efforts

Its that Benjamin Perrin dude.. and also that Arthur Hamilton guy.. kind of a twin bill, legal tag team ..
So our wee question(s) is.. & just mainly re Benjamin Perrin, mind you ..

What's the status re Benjamin's emails and communiques re PM - PMO - Senate - Scandal - Cover Up ???
Does anybody know who wiped, swiped, deleted, secreted, shredded, copied.. or buried them?
Does a single Canadian know who did.. if Benjamin didn't ?? And on who's orders ?
And realistically .. does (did) Benjamin have the know how, or the spare time
to log into the Parliamentary email servers and backups ?
And remove every aspect of his 'service to Canada' ..... sic

Do we think Nigel done the deed.. or the Sergeant At Arms in Dark o Night !! ?? By candle light ??
Or mebbe the LIBTARDS .. or somebody from Attawapiskat with a feather in her hair ..
Was it that damn parliamentary page what pulled the Stop Harper sign outta her leotards ?
Or the elusive Poutine feller ..

Mmnnph .. do we have a runaway cadre of wonks n geeks with high level access n purging privilege ??
Are they like the dudes on submarines that 'arm' the detonators when the boat is sinking ?
So's the enemy can't examine the ship (of state in this case)
to see what secret weaponry n powers it uses ???

Or...
Who calls Stephen Harper on the telephone.. or drops by to 'chat' ..
pat the chinchilla, and says 'bye the bye Stephen ..
we need to 'disappear' everything Benjamin Perrin 'contributed' 'advised' 'shared' 'emitted' as your counsel
Its in your best interest Stephen .. we need to circle the wagons now.. repel all boarders'

Who is that person, that advisor ? Is that Ray Novak ? (& where does Ray live ?? Now ??)
Is that Jenni Byrne ? Is it a quaking n shaking in his legal boots, Arthur Hamilton ?
and where are Arthur Hamilton's emails, by the way ? They missing in action too ?
Too Solicitor/Client privileged for the RCMP to see n giggle over?
Is that great yankee Tom Flanagan still whispering in Stephen Harper's ear ?
Does SCIS just drop by for late night hot chocolate at Sussex Drive ?

Who can ask these questions .. and who can.. should, or must answer them, Simon ??
The wee salamanders surely do wonder ..

Rich brat Trudeau is a pig. I'm miserable about the NDP losses here in Bourassa (where the Liberal Party is basically the Mob) and in Toronto-Centre. There was utterly no risk of a Con victory here. They got less than 5% of the vote.

"This operation was run out of your office, you have to take some responsibility for that..."

No, Chretien and Paul Martin had to take responsibility for the sponsorship affair, but Stevie is immune, the law doesn't apply to our very own Exxon version of Henry the VIII!

Have they got through Duffy's e-mails yet? It was said Duffy hadn't dropped all of his bombshells. Wright is very furious at the Senate, for stabbing him in the back. Harper accused Wright of lying to him. Is Wright willing to take the rap for Harper or, will he take Harper down if he can? I doubt if Harper will permit Wright to go to court. Harper pretty much controls everything, he gets his hands on.

What we do know is, Harper has no honor, decency, ethics nor morals, what-so-ever.

hi anon...well remember that the affidavit is just another stage in the investigation and it has been filed to obtain more e-mails from the Senate, including Harper's longtime and very close confidant Carolyn Stewart-Olsen. So I think it's only fair to give Cp. Horton and his investigators a chance to see what else they can come up with. So far they have impressed me with their diligence, and let's face it without their help we would have no idea what had gone on. The Cons had declared the paper trail didn't exist, and they would have stonewalled the whole thing to death, as they are still trying to do now. Finally, remember that any court case could just be the thin edge of the wedge and lead to others. I'm going to to get two or three TVs so I can watch all the trials at the same time... ;)

hi salamander....apparently Perrin, or whoever in the PMO, used a liberal interpretation of the Treasury Board rules to have the e-mails deleted. But just because they have been deleted doesn't necessarily mean they can't be recovered from a hard drive or don't exist in other places. So stay tuned on that one.
As far as I can see there are at least three missing elements: the Perrin e-mails, Stephen Harper's testimony, and the correspondence of the Con leaders in the Senate, especially Carolyn Stewart Olsen Harper's close confidant. However, I still can't decide whether Harper testifying at Wright's trial, or testifying at Duffy's trial, will be more entertaining. Right now I'm thinking Duffy... ;)

hi lagatta...I know how you feel, it was a very disappointing night for the NDP. After Mulcair's excellent work on the Senate scandal they had a right to expect better. But people need to understand that the power of Justin Trudeau is based on the way he symbolizes change, that there is a great thirst for that in this land. And that it may be simply generational, in which case Tom Mulcair and Stephen Harper are both at a disadvantage. The NDP may be doing an excellent job in Parliament, and Tom Mulcair may be grilling Harper in excellent fashion, but Justin is coasting on hope and it's powerful wave.
I'm glad though that you pointed out that the Cons got so few votes in Montreal. I had noticed that, and the thought that my beloved city loves the Cons as much as I do, gave me a warm feeling all over.... :)

hi kootcoot....yes indeed Hexxon the VIII has always had his own particular views about our laws, our values, and our humble traditions. They're good for others, but not him. And of course he doesn't want anybody to think that he's a control freak eh? He'd prefer we think of him as a guy who likes to delegate everything, but just couldn't get good help. Hmm...I'm no judge, but I don't think it will work...

hi anon...yes that is a big question. Will Nigel Wright sacrifice himself out of some misplaced sense of duty? Or because he doesn't want to go down in history as the man who brought down Great Leader. I think it's entirely possible it fits his character perfectly, at least what I know of him. However, I also think that if he was asked to describe what exactly he told Harper he would tell the truth, so he could bring him down anyway. ...

Hmm, if we had my MP Alexandre Boulerice - he is so good in the House, and about the same age as Trudeau. But probably too left and too "Québécois" for some NDP factions.

hi lagatta...yes, I like Alexandre Boulerice, a LOT. When he shouts at Stephen Harper I see Great Chicken Leader looking nervously at the exit, or at his many bodyguards. But you're right, Alexandre is probably a bit too left and too Québécois to challenge for the leadership. So you have him all to yourself. Damn you !!! ;)