The Senate Scandal: How Did Harper Not Know? 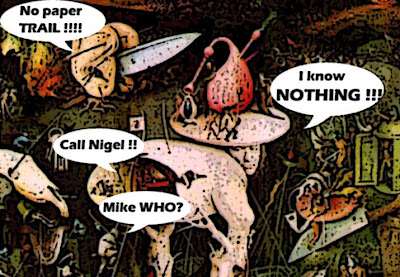 Well as you know it's been hard to know what went on in the PMO as the Mike Duffy scandal was breaking. And the Cons were in a frenzy trying to cover it up.

Because the PMO operatives would rather cut their own tongues off than squeal. And the paper trail has gone missing.

But luckily for us, there's still the visitor's logs.

Just days after his housing claims were sent to auditors for review, Sen. Mike Duffy paid a visit to the building that houses the Prime Minister’s Office, which includes the office of Stephen Harper and his then-chief of staff Nigel Wright.

The day after Duffy visited the Langevin Block, two top Conservative senators visited the same room Duffy had been in. One was Sen. David Tkachuk, the chairman of the committee overseeing the audit of Duffy’s expenses; the other was Sen. Irving Gerstein, the head of the Conservative party’s war chest.

Visitor logs for the Langevin Block, released to Postmedia News using the access-to-information law, add to the timeline of events on the Duffy affair already in the public domain, and show Duffy inside the PMO building in the days before he publicly announced on Feb. 22 that he would repay his improper housing expenses.

Which show that the Senate traffic in the PMO was so busy they must have had to hire a crossing guard eh?

And of course raises that old nagging question. The question that just won't go away. With all this activity going on in his own office, how did Stephen Harper, the control freak, not know what was going on?

Was he temporarily blind, deaf, and dumb? 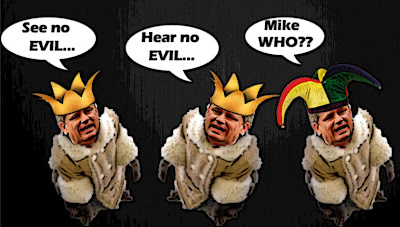 Will his claim that he knew NOTHING come back to haunt him?

Or will Old Duff.

Because when you read the visitor's log, and this story.

Senators on two powerful committees dealing with Senate expenses were meeting on Parliament Hill Tuesday, including an audit subcommittee that met with federal Auditor General Michael Ferguson, CBC News has learned. Senator Mike Duffy, who is being investigated by the RCMP for breach of trust, was also seen being driven onto Parliament Hill Tuesday in a silver Mercedes-Benz.

You really have to wonder what Duffy knows, who is really running this scandal.

Who's got who over a barrel.

And who's running SCARED... 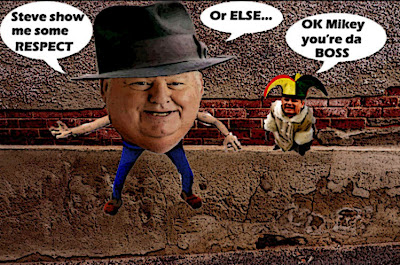 Mikey is going to steal the show.

This Con scandal can only get better.

And it will DESTROY them...

It would be interesting to know if Steve was at his office when the Senators paid a visit. This scandal is turning out to be a pretty good detective story.

I am sure that a couple of million dollars in an off-shore Duffy bank account will buy his silence.

Driving a Mercedes and thieving from the tax payers? I doubt very much Duffy didn't have the money, to pay his own expenses? This doesn't pass the smell test.

Knowing the Harper government and Harper's underhanded tactics? No paper trail, no surprise.

hi anonymous...yes it would wouldn't it? I believe there is another log in the PMO that might tell us whether Harper was there, and I'm sure his RCMP guard must have an exact notation somewhere. And I wouldn't be surprised if the smallest details get the Cons into BIG trouble...

hi Kirby...from what I know about Duffy a mere promise to make him a Minister once the scandal has blown over should do the trick, as unrealistic as that might be. Or we could make him the ambassador to the Vatican. I'm sure he would fit right in, and do penance at the same time... ;)

hi anonymous...I don't know whether the Mercedes is his or whether he got a friend to drop him off. But it sure makes a great scene eh? Sort of like Mr Toad riding up to Toad Hall in the Wind in the Willows. Somebody clearly thinks that he's not guilty. Or knows something we don't. And yes a paper trail in the Harper PMO would be too much to ask for...