The Ad Campaign that Will Finish off the Keystone Pipeline 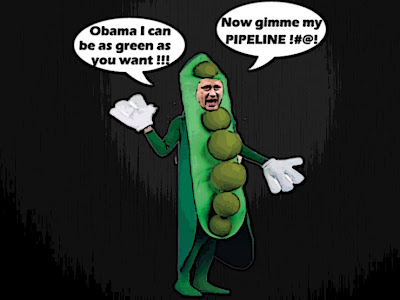 And as you also know, I believe the pipeline will be one of the casualties of a missile strike on Syria, as Obama tries to repair the damage to his political base.

Especially since Big Oil now claims it doesn't need it.

But this is the ad campaign that should finish it off...

Brought to you by this billionaire.

Billionaire investor Tom Steyer said he is backing a four-part, $1 million advertising campaign aimed at convincing viewers the Keystone XL pipeline will hurt the economy and communities and should be blocked.

Steyer, an Obama donor, said his efforts are aimed at giving the president the political space to reject the pipeline. As the Keystone review faces possible further delay, the prospects for approval dim, according to Steyer. 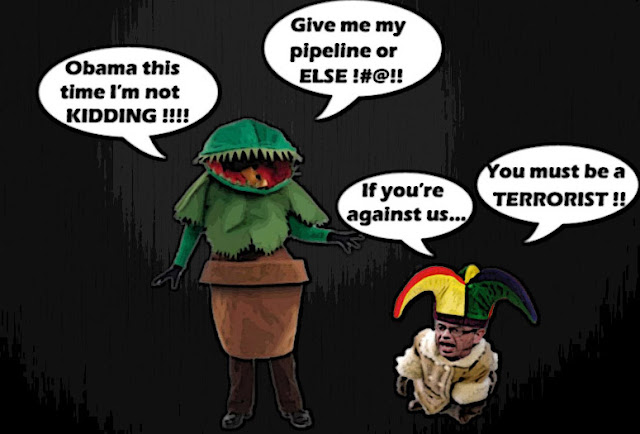 And the Cons have never looked more like clowns whose time is almost OVER.

Hey Joe, Olly, don't forget to water Great Shrivelled Leader, with some of that tar pond bubbly you said was safe to drink.

This is all about Harper and his loss of credibility. In the past Harper has tried to sabotage Obama and interfere in his getting elected. Harper is a clone of the Rebublican political machine and while he,s Canada,s Prime minister don,t expect any success dealing with the keystone issue or any other issue for that matter.

The chickens have come home to roost

Thanks for this. Great ad from billionnaire Steyer - very conservative, hitting the notes of patriotism, common sense, worker's jobs. Smart.

hi anonymous...yes I have been working overtime, so when my little holiday arrives soon I can stretch out in my hammock, and take some time off from blogging. Unless it's raining. ;) But yes, if Harper does lose the pipeline, a lot of it will be his fault. He dragged his feet, fought any attempt to clean up his act, and then tried to fool the Americans with a fraudulent campaign worthy of a Nigerian spammer. I'm also sure Obama hasn't forgotten how the Harperites tried to sabotage his campaign, and as you say it looks as if the chickens are coming home to roost...

Hi Alison...yes it's a great ad isn't it. I've been waiting for somebody to tell the Americans that the oil isn't for them it's for the Chinese, and Aramco and company. That alone should sink the project. And I'm eagerly awaiting the next episode... :)