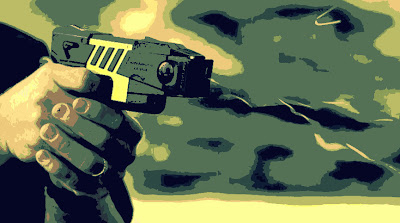 I must admit I didn't think that police in Otario could stoop any lower than the public execution of Sammy Yatim.

For its senseless brutality stunned me. But then so does this.

Ontario's police watchdog is investigating after officers deployed a Taser on an 80-year-old woman in Mississauga, Ont.

Their preliminary information indicates that Peel Regional Police had received calls about a woman walking along the road. The SIU said that police spoke with the woman and "at some point" a Taser was deployed and the woman fell to the ground.

The woman was taken to Credit Valley Hospital where she was treated for injuries that included a broken hip.

Especially since suffering a broken hip when you are elderly can be a death sentence.

And this just after the Ontario government recently announced it will allow police to expand the use of stun guns.

Which only goes to prove that it doesn't matter what weapons the police use, if they are not trained when to use them or not. And human decency is absent.

They tasered Sammy Yatim after he had been shot eight times. Now they're tasering an elderly woman for walking along a road? What is happening? What kind of country are we becoming?

Answer: a place where the violent values of Amerika have replaced our more compassionate and intelligent Canadian ones.

A place where the mentally ill, or those in some kind of life crisis are in danger of being killed. By the police charged with protecting us.

A place where because it could happen to anybody, nobody is really safe...

All the officers get to carry those tasers now because someone thought it was a good waste of money to purchase them. Most likely right after someone from the taser company paid someone a visit and told them how wonderful they are.

Don't worry. Tazering an 80 yr old woman walking down the street, in B.C. a few years ago, they tazered a man about the same age in a hospital bed. They also tasered a child under 12. They did decide to draw the line at pregnant women, if they knew they were pregnant.

Since those days there are fewer tazers out and about. Not all officers should be issued these things. They can kill. Some one who tasers an 80 yr old person should not be one the job. If they can't deal with an 80 yr. they are pysically unfit to do policing work.

Most officers carry batons. All they need to do is use them. You'd be surprised how well they work, they don't kill like a gun or taser. of course if police officers can't deal with 80 and older citizens perhaps they should just call in a care aid from any nursing home. Or perhaps a kid down the street who will talk to the person as if they were their grandparent.

There is another case of police brutality against a senior citizen that happened in a rural township of Gatineau Quebec, where an out of control cop stormed into a house dressed in hunting camouflage gear and struck a 75 year old woman with his baton and shot her son David Leclair in the back. Charged with 10 offences under the police act by the ethics police Commissioner is Pierre Francois Blais of Gatineau.

Pierre-François Blais of Gatineau police, Quebec, is back in the news. He has been charged by the Quebec police ethics commissioner on two other incidents of brutality, foul language, abuse of power. This is Blais 3rd indictment in less than 3 years since the Leclair shooting. Blais was disciplined for use of foul language and lack of respect in that case. Pierre-François Blais is the son of former justice Canada minister Pierre Blais.