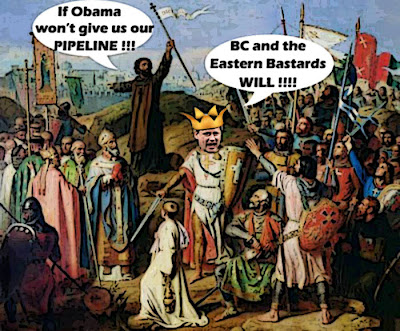 Well he may be losing his battle to convince Obama to approve the Keystone XL pipeline, but I see nothing will stop Stephen Harper from launching yet another oily crusade.

First he will conquer or bribe British Columbia.

A parade of cabinet ministers and senior bureaucrats will head to British Columbia starting next week as part of a major push to mollify opponents of building oil pipelines to the West Coast, CBC News has learned. Prime Minister Stephen Harper is signalling he intends to make progress on proposals to connect Alberta's oilsands with ports in British Columbia and the lucrative Asian markets beyond.

“The Harper Government is focused on creating jobs, economic growth and long-term prosperity. So we welcome today’s report on the proposed Energy East pipeline, which would transport western Canadian oil to the east and new markets abroad.

For he will have his pipeline no matter what it costs. 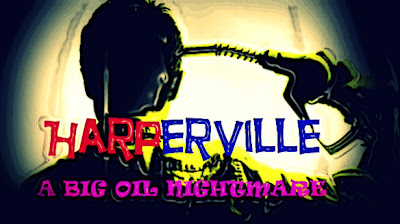 Which for some reason made me think of this nightmare...

What happened to Adam Nobody.

Toronto police Const. Babak Andalib-Goortani has been found guilty of assault with a weapon in the G20 arrest of protester Adam Nobody three years ago. Nobody was singled out for arrest at a demonstration on June 26, 2010, at the Ontario legislature during the economic summit of world leaders. He was tackled as he ran from police and struck repeatedly with a baton.

What happened to thousands of other peaceful protesters at that G20 summit.

Who were kettled by police for no good reason... 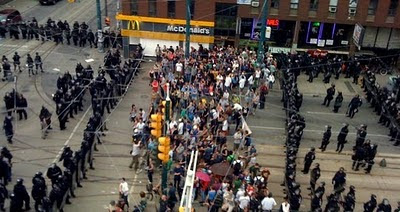 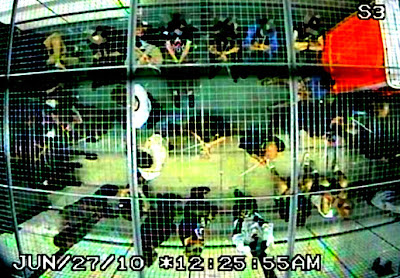 Which in turn made me think about whether that fascist nightmare could ever happen again.

And I think as long as Stephen Harper and his foul Cons are in power it very well could. For think about it eh?

He's desperate, all those scandals are killing his government and driving him crazy. He's circling the mattresses in the PMO, preparing to launch another Great War on Crime in a country where the crime rate is going down.

And with a long list of enemies like he has, how easy would it be for him to declare that those who oppose his precious pipelines, are also the enemies of Canada? Criminals, traitors and TERRORISTS.

For judging by what Great Ugly Leader was tweeting about today...

He has a real thing for lists.

So you can see where this one is going eh?

And all I can say is I can't speak for those in BC, but what I do know is that the Eastern Bastards will not be easily moved.

He will be defeated. If the voters don't get him, the police eventually will.

But until that happy day, he's never been more dangerous.

And this nightmare can only get worse...

Running from police? Along with everyone else!

Um, no. he will not conquer BC, that he is even showing his pasty face here is a tribute to his overweening ego, rather than his popularity (non-existent) so let me assure you, Simon, he will not be mollifying anyone here, and no, he will not be pushing through a pipeline..we'll fight him anyway necessary to preserve our pretty Province, even if it means throwing our bodies in front of machinery, he will make absolutely no progress here....none, zip, zero, goose eggs...the parrot is dead.

Remember the days when we had a PM who cared about Canada?

A P.M. who cared about Canada? Lets see, I'd say Trudeau Sr., Joe Clark, Chretien, Lester Pearson and those are the ones in my life time.

stevie slime has sent a number of his slimers out here to B.C. to "discuss" matters with First Nations to try to get them to agree to the pipeline. That will be their verison of consulting. Then he'll pass the necessary legislation. crzy christie crunch will welcome him with open arms, as she is the mines and LNG projects. The rest of the citizens in B.C. perhaps not so much. We are still faced with the prospect of oil spills in the Vancouver harbour. There goes the neighbourhood. stevie slime may not understand this, but all those people from China who live in Vancouverits paid at least a million for their homes will not be happy when their property values nose dive. Oh and a million on the west side of Vancouver is just the lot, you still hve to buy the house. That is a 33 ft wide lot.

stevie doesn't seem to remember the slide last yr. in B.C. which killed 4 people. He doesn't seem to understand that there is currently huge rain falls in Colorado with floods. They had the same in Europe and Russia this year. There is no reason it can't happen in B.C. and those pipelines will go dumbling through the landscape like a snowball in an avalanche. Yes it will be something to see.

20 yrs ago B.C. had huge demos in an attempt to save Claquoet Sound. Time to dust off the protest wardrobe and get with it again. How will stevie slime deal with it? Just like they dealt with the G 20 protestors in Toronto, except B.C. won't have the money to jail the people or have trials. B.C. is flat broke. when you count what the crown corporations owe, we look like Detroit north. Getting to trial, won't happen. We have rapists having their cases dismissed because the government can't get them into court in a timely manner.

Pipelines through B.C. will be a waste. China may not need the tar/oil because their economy is in some what of a decline. The coal mines in B.C. are laying off miners. One mine has laid off 200 miners adn the miners from China, well they have returned there. The price of coal is falling. Expect other things to follow down the tubes.