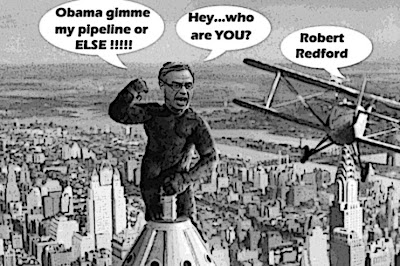 OMG. How embarrassing. I see that old Con man Joe Oliver just won't give up. Once he tried to fool us into thinking that the water from the tar ponds would be safe to drink.

Now he's in New York trying to scam the Americans into believing that the Cons are real environmentalists.

The Conservatives are keeping up the pressure on Washington to approve the Keystone XL pipeline, touting the economic benefits of the project and Canada’s environmental record.

With the U.S. administration considering the fate of the pipeline to ship Alberta oil sands crude to American refineries, federal officials are working to defuse worries south of the border about the environmental impact of the energy project.

Instead of the rogue government of a pariah nation that led the murderous assault on Kyoto, has sabotaged every attempt to fight global warming, and couldn't give a damn about torching the planet.

Gawd. Where's the FBI fraud squad when we need them?

And thank goodness for Robert Redford...

And this other brand new ad from Tom Steyer, one of Obama's billionaire supporters...

Because SOMEBODY has to tell the truth eh?

And Obama might not listen to Olly but he WILL listen to them.

You know, if the Cons had developed the oil sands in a responsible manner, if they had been real environmentalists, they might have had their pipeline and eaten it.

And now they're going to CHOKE on it... 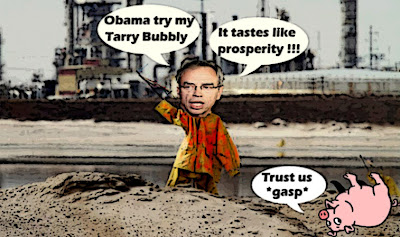 Simon: Here is yet more evidence, I think, to question the claim by the likes of Mark Kennedy that Young Steve was actually very smart and bright.

First, a very smart/bright person, I suspect, would have realized that responsible development of the oilsands industry, while costly in the short term, would likely bring immeasurable benefits, financial or otherwise, in the long run.

Second, instead of getting in front of the band and cheering while his fellow Albertans were yelling about letting those Eastern bastards freeze in the dark, Young Steve could have pointed out to them that they should let Pierre Trudeau build those darned pipelines. In fact, the more the merrier. Selling Albertan oil at slightly lower than global prices for the short term (i.e. essentially supporting PET's NEP) would have let Alberta grab market share in the long term. In business terms, it is called called "investment", no? It would have got those Eastern bastards hooked on the oilsands industry. It would have avoided the difficulties PM Steve is now facing.

Instead, Young Steve was proposing to build this "firewall" around a landlocked province gushing with oil. Now, I think to myself, why would a bright young person do that, eh? Unless of course he is really not so bright after all. :)

Redford certainly hasn't won over many friends here in Fort McMurray by comparing our community to Hiroshima. I'm not exactly sure what he means by tar sands oil since tar comes from trees. Our boreal forest isn't disappearing at a terrifying rate. Its hard to respond to what he says simply because he doesn't provide any sources for his information. I'm pretty sure my environmental footprint is much smaller than Redford's so please forgive me if I have a hard time taking anything this guy says seriously.

Ummm, @WayWayUp. Robert Redford didn't ever compare your community to Hiroshima. And if you don't know what Tar Sands are, you need to do some educatin' of yourself. There's a huge amount of valid scientific evidence available in many many places showing the negative effects of the "Oil Sands" as they have been mined. Again, if you live there, you need to get some further facts.