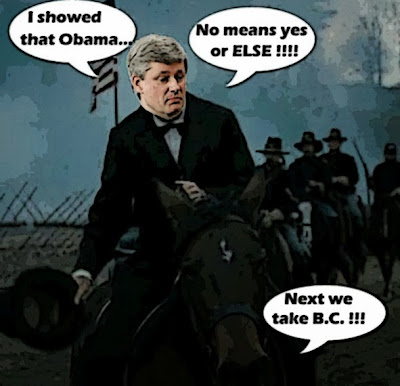 Well I see Stephen Harper has returned from his disastrous attempt to try to force Obama to approve the Keystone pipeline.

And that after shooting himself in both legs by insulting the American President, the long ride back from New York City was more like Napoleon's retreat from Moscow than Lincoln's march to victory.

But then who can be surprised eh? When the timing was all wrong.

And he forgot that people in New York City don't have much time for climate change deniers and pipeline pushers. Not after what Hurricane Sandy did to them.

As Harper's nemesis, the billionaire businessman Tom Steyer, points out in this latest video...

Which you think Great Pipeline Leader might have remembered. Especially after what happened in Alberta, and could happen again next year.

But then it's not just Harper's energy and environmental policies that are in total disarray. His whole government seems out of control, and making it up as it goes along.

Take the marijuana issue for example. On Friday the PMO sent out their new/nouveau Public Security Minister, the hapless stooge Steve Blaney, to attack Justin Trudeau and one of his senior advisers.

Our plan is to create more jobs – their plan is to push pot.” “Canadians deserve to know why Justin Trudeau wants to make it easier for children to access drugs it in their communities.” ”

In the crudest way possible. As only a Con smear artist could.

The Conservative government is launching a $1.3-billion free market in medical marijuana on Tuesday, eventually providing an expected 450,000 Canadians with quality weed.

One that would leave Great Prohibition Leader presiding over the setting up of the biggest drug distribution ring in Canadian history.

And will no doubt give him something else to sell besides dirty oil eh? 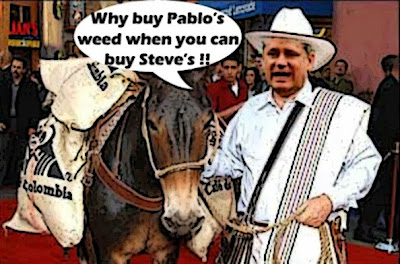 Even if it  makes him look like a complete hypocrite. Or a desperate political leader who is afraid Trudeau's marijuana policies are making him too popular. And wants a piece of the action.

But of course it won't work. Not when Justin can make the idea of legalizing marijuana sound normal and non-threatening. 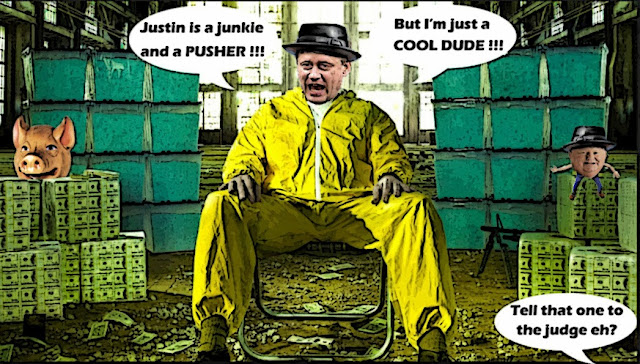 The kind of man who would give marijuana his seal of approval, while jailing thousands of young Canadians for smoking it.

And bust that Con hypocrite instead...

An editorial in the New York Times last week accused the Harper Cons of muzzling government scientists so they won’t publicly criticize Keystone. The newspaper’s editorial board said Harper is bent on guaranteeing public ignorance by “restricting scientists who receive government funding from sharing information, especially climate change research." The Harper gutterment don't believe in facts and stats. Harper has been shilling for the oil industry for so long his words won't make a difference to Obama. To the Americans it really boils down to a domestic story and Canada under Harper is a laughable bystander. As for pot, Harper should listen to to Canadians.Don't hold your breath waiting for it. Harper "listening" is as big a myth as his "good economic management".