Obamacare, the Koch Brothers, and the Harper Cons 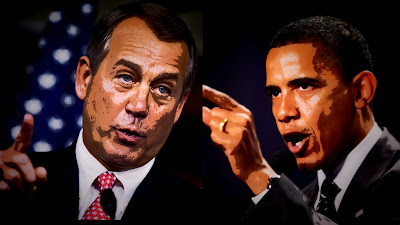 It's a frightening and truly disturbing sight. The Republicans in the House of Representatives threatening to shut down the American government. Again.

With one vote on Friday, the Republican-led House launched the latest spending battle in Congress -- one that could bring a government shutdown in less than two weeks. By a 230-189 tally almost strictly on party lines, the House passed a short-term government spending plan that would eliminate all funding for Obamacare.

Just to try to kill a bill that would provide millions of Americans with health care they otherwise couldn't afford.

Because those rabid right-wing fanatics will do ANYTHING to kill socialized medicine, no matter how much chaos or how much human suffering they cause.

And if you want to know how low they will go, all you have to do is watch these two videos paid for by the ultra-right wing Koch brothers. Who know that Obamacare can only succeed if the young as well as the old sign up for it.

So they're trying to frighten them away in the most disgusting manner possible...

Because that's the kind of people Cons are, the lowest of the low, the scum of the earth.

But if you think our medicare system is safe from those creepy teabaggers, think again. Because here is the Fraser Institute, that has received hundreds of thousands of dollars from the Koch brothers.

Who just happen to be the ones who stand to gain the most from the construction of the Keystone XL pipeline.

Beating the drum for the Care for Cash Gang.

Because it's all one big conspiracy eh?

And it's all happening just as Rona Ambrose, who as we now know would also put ideology before humanity, is preparing to negotiate a new health accord with the provinces.

Just as Stephen Harper is pushing ahead with his stealthy plan to cripple medicare, by making the provinces too poor to afford it. Cutting health transfers, swelling their prisons, and forcing them to pay for all the unemployed Canadians him and his nasty little gnome Jim Flaherty are throwing into the cold.

Just as our healthcare system is preparing to cope with a human wave of ageing boomers.

And just as the Care for Cash Gang is counting on their good friend Stephen Harper to help them get a bigger piece of the action... 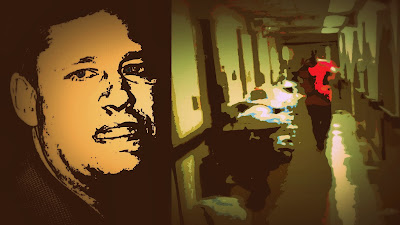 Because they know he hates medicare, and the kinder, gentler Canadian values it represents with a passion. He was first elected with the support of a group that was founded to destroy it. And he is determined to mutilate it before he leaves office.

Like David Cameron and his Cons are doing to the National Health Service in Britain... 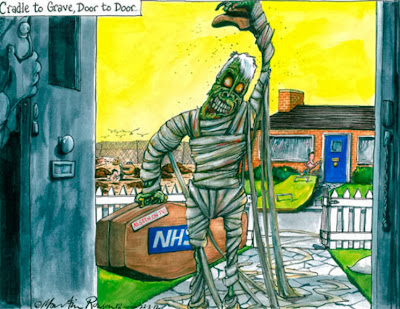 By privatizing it beyond recognition, and slowly killing it in the process.

Yup. There are a lot of good reasons why we need to unite to drive Stephen Harper and his brutish Con regime from power.

But making sure our beautiful medicare system is safe.

Has got to be the best, and the most Canadian one of all...

In 2014, which is just a year away, the federal government will negotiate the Healthcare for each province in Canada…

Do you want Harper closing that deal?

This entire country is in peril, not just our health care. Harper was Policy Chief for his, Northern Foundation of 1989. Harper was linked with, some very dubious outfits and their people.

Once Harper forces his FIPA deal with Communist China, we can kiss Canada good-bye. That country will be in Canada, for a minimum of 31 years. Canada will become a polluted waste land, just as China is.

Harper is every bit as hateful as, Stalin, Hitler and Mussolini. All dictators have very similar personalities. All of them are sociopaths and evil to the extreme.

when stevie slime starts "negotiating" our health care system with the provinces expect to see private health care permitted. There will be choices for "opting" out; private clinics and hospitals, etc. It will also provide for "extra billing".

The health care system stevie slime would like is one which would make the Koch brothers happy, along with all the "private/for profit" health care corporations of America. What does it mean for Canadians? Well exactly what we had in Canada prior to our current system. It wasn't nice. No money, no medical care. No job, no medical care. Children didn't go to the dr. pregnant women didn't go to the dr. People with chest pains, they waited and then they died. The American style health care costs a fortune, just for the paper work. The CEOs of these health care insurance companies make $20, $30M a year. They are on stock exchanges. We know who owns 95% of the stock listed on the NYSE, the 1%ers.

private healthcare was permitted and grew under the Liberal govts: short memories sink ships.
Memory Lane
It was a Liberal prime minister, Paul Martin, who first turned a blind eye to the large-scale growth of for-profit private clinics, particularly in Quebec and British Columbia. Even former Liberal prime minister Jean Chrétien allowed the start-up of some private clinics that violated the spirit of the Canada Health Act (CHA). So before the Liberals start throwing stones on the universal health-care file, they might want to consider the glass house they have constructed for themselves.

By the time Canadians voted the Grits out of office in early 2006, there were already more than 50 private, for-profit clinics in Quebec alone, most in the Montreal area, and several in Paul Martin’s own riding. Mr. Martin’s personal physician operated one of the largest chains of private health clinics in the country (although the Liberal prime minister insisted he saw his doctor only in his public practice). If any of this ever was objectionable to Messrs. Rae and Ignatieff, they seem to have kept their complaints to themselves.

In fact, the 2006 election was itself precipitated, in part, by the Liberals’ unwillingness to enforce the CHA. Despite having pledged $41-billion to the provinces over 10 years in a 2004 deal that was supposed to fix the public health system “for a generation,” by 2005 the NDP were nipping at the minority government’s heels over the growth of private medicine. In 2005, Mr. Layton complained that a meeting with Mr. Martin on the issue “was a disappointment. Our specific proposal was rules to stop the growth of privatized health care. But the Prime Minister did not agree action was needed.”
see http://fullcomment.nationalpost.com/2011/04/20/national-post-editorial-board-liberal-hypocrisy-on-health-care/

Just saying that both corporate parties would be happy with private/for profit delivery of our public healthcare system.

hi anonymous... thanks for the link. I should warn everyone I'm thinking of getting into animation myself. ;)
But yes, I'm familiar with all he has said about medicare, and needless to say I don't trust him as far as I can spit. He would never dare attack medicare directly, but as I've explained he's attacking it in a stealthy manner, and unfortunately nobody in the MSM seems to be able to see the forest for the trees. And when you look at what the Cons in Britain are doing with the National Health Service, it's shocking to see how little time it takes to dismantle a whole system...

hi anonymous...Harper's FIPA deal is a problem, but to be honest his hidden plans for medicare worry me even more. Because if he does manage to damage it, just as the need has never been greater, it will cause mass suffering. As I said above, I can forgive a lot of things, but I could never forgive that...

hi e.a.f... I fear you're right. WE are going to have to watch them like hawks when they start negotiations with the provinces. Because I'm not exaggerating when I say that the private health care giants are drooling to get their hands on us. And if you give them an inch they will take a mile. My friends at Candian Doctors for Medicare, like other health care workers, have many good ideas for making our wonderful system even better. But further privitization is not the answer...

hi Jan...you're right. I think a lot of Canadians would be shocked to know how privatized our public health system already is. And the Liberals cannot be proud of their record. They did great damage to our system that has taken years to repair. One can only hope that they have learned from their mistakes, because our beautiful system is going to need all the friends it can get...

SO what's the link between Harper, Duffy and Koch Brothers??