The New York Times Goes After the Harper Regime 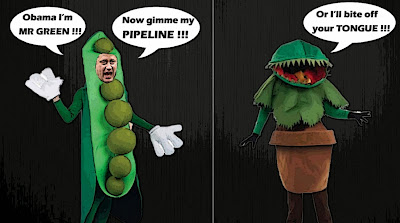 Uh oh. It looks like Stephen Harper has been exposed. He's been trying to fool the Americans into thinking he's a REAL environmentalist, so Obama will give him his precious Keystone pipeline.

But being called a tongue biter, or a muzzler, by the New York Times, isn't going to help.

The New York Times editorial board is taking the Harper government to task for allegedly silencing publicly funded scientists, a strategy the Times says is designed to ensure oilsands production proceeds quietly.

“The government is doing all it can to monitor and restrict the flow of scientific information, especially concerning research into climate change, fisheries and anything to do with the Alberta tarsands — source of the diluted bitumen that would flow through the controversial Keystone XL pipeline.”

And this is brutal:

“There was trouble of this kind here in the George W. Bush years, when scientists were asked to toe the party line on climate policy and endangered species. But nothing came close to what is being done in Canada. “This is more than an attack on academic freedom. It is an attempt to guarantee public ignorance.”

Not just because it makes Harper look like Putin. Or makes old Joe Oliver look like a senile IDIOT... 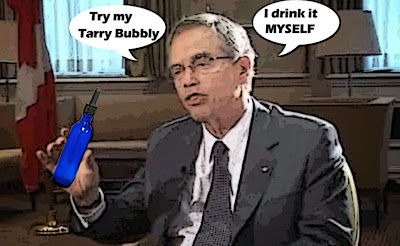 In a statement, the Natural Resources Minister said the article “grossly misrepresents the ability of scientists working for the Canadian public service to communicate with the public.” “Neither I nor any member of my political staff have ever directed scientists not communicate with each other or with the public, nor, to my knowledge, has any member of my ministry,” Oliver told Postmedia News.

Or a ghastly LIAR

Or a shameless hypocrite:

“Americans are free to oppose resource projects in Canada as they are to development in their own country. However, it would be refreshing if they confined themselves to the facts and the science.”

But because it makes us ALL look bad eh?

The kind of people who would elect a thug government that muzzles scientists. Or forces them into the streets to defend science itself... 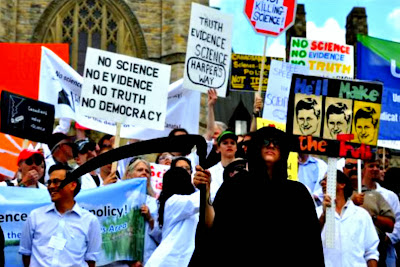 My God, how low have we fallen? What kind of a pariah nation have we become?

Because now that the New York Times' Editorial Board has informed the world of what's happening here, PARIAH is the only word you can use to describe Canada.

And the only good news is that once Obama reads that editorial, Stephen Harper's precious pipeline is going, going, GONE.

Because he can fool all kinds of dumb Canadians, but he won't fool him.

Which leaves the rest of us with only one choice if we wish to regain our self respect, or repair our poor country's shattered reputation.

And that is organize, unite, defeat that ghastly Con regime and its depraved leader. And jail them if possible.

Before they do even more damage. 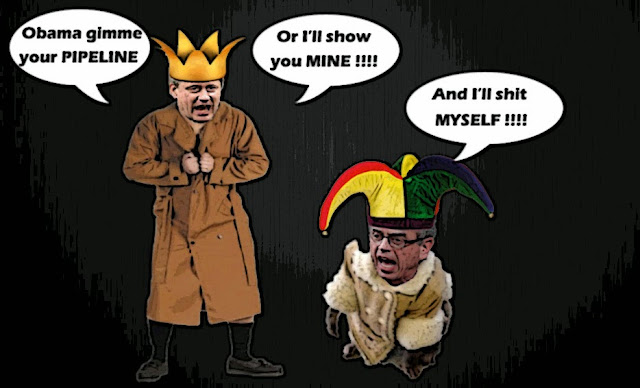 Seems to me I do remember the incident. Harper would not permit Scientists to publish their papers? Everything had to go through him first. Our Scientists were muzzled by Harper.

Muzzling Scientists is exactly, something Harper would do. Harper can't even be shamed for, his dirty tactics.

Nice to see the New York Times write it as it is. stevie and his slimers certainly have muzzled Canadian scientists. For old foggy face to say otherwise is being less than truthful. The slimers have attempted to muzzle anyone who works for the public service, who does not agree with them. So much for freedom of speech in Canada.

We don't need Keystone and neither do the Americans. it is just a method of moving tar through clean land and water so it can be exported to China; a country which hasn't exactly been known for its human rights, freedom of religion or speech. Its massive exports has made a huge mess of their enviornment and our economy.