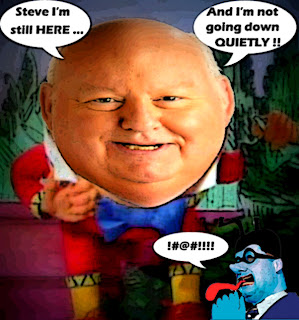 Well I see that the former Law Clerk of Parliament believes that Mike Duffy may have committed no crime.

Rob Walsh, who was Parliament's top legal adviser until 2012, says in theory, a criminal offence would occur if money was given to a senator in exchange for some kind of benefit. But in case of the Duffy cheque, Walsh can't see what benefit Wright would have received for repaying Duffy's expenses.

Which is not what RCMP Cpl. Greg Horton believes:

RCMP Cpl. Greg Horton states in a court document that a Senate report, meant to be critical of Duffy, was altered in Duffy's favour by the Senate's committee on internal economy to find no fault with his behaviour. Horton concluded, "I believe there was an agreement between Duffy and Wright involving repayment of the $90,000 and a Senate report that would not be critical of him, constituting an offence of frauds upon the government."

And of course, I'll have to leave it to the justice system to determine who is right eh?

But what I do know is that Stephen Harper must be desperately hoping that Old Duff is cleared. For not only is he threatening to drag Harper into court if he is charged.

As Macleans reports in its latest print edition, he knows where a lot of bodies are buried, the one-time King of the Hill is not going quietly, and as Jonathon Gatehouse says in this promo video he's still dangerous. 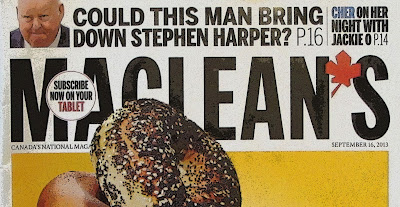 And sure enough, the article is a fascinating look at the rise and fall of the once popular broadcaster, and his long slobbering campaign to win himself a Senate Seat.

Chatelaine magazine named him to their annual list of the country's "sexiest men," lauding Duffy as a cuddly "sticky bun in a breadstick society." He took to carrying head shots in his briefcase to oblige the many autograph seekers.

And it does give you a good idea of why Stephen Harper must fear him:

Since the Senate expense scandal started unravelling late last November, Stephen Harper has been absorbing a pounding in the press. and the opinion polls. And none of his efforts to contain the damage --throwing his golden-boy chief of staff over the side, removing the leader of the Senate from cabinet, promising to at long last reform the red chamber--- seem to be having much of an effect.

It appears that the country's control-freak-in-chief has at last met his match, someone with 40 years of experience on the Hill, a deep cache of secrets and an axe to grind. Mike Duffy may be on his way out, but he's not going quietly.

While Duffy isn't speaking, he is by no means silent. His hand has been evident in many of the stories about his past interactions with the Conservative party and the PMO. And his preferred spin --that he is being unfairly singled out as part of a concerted effort to build-up support for Senate reform -- has been given a sympathetic hearing by at least a few of his old friends.

Fighting on is perhaps the only option left for the Senator. His pension doesn't vest until his sixth anniversary in the job in January 2015.

All of which I interpret to mean that if Duffy is charged, the Senate scandal could become even messier and DIRTIER.

A mudwrestling match that as Michael Sona, the Con charged in the robocall scandal tweeted today...

Might leave Stephen Harper wishing he'd never met Old Duff, even more than he does today.

Which I think we can all agree is something to look forward to eh?

Who will be charged? Who will SQUEAL?

And when it's all over who will be the King of the Hill?

And the real Humpty Dumpty? 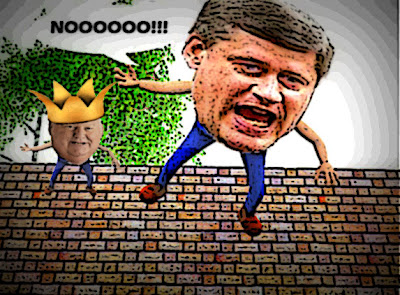 I believe Harper will use every underhanded tactic in the book, to get Duffy off from prosecution for his theft. Even resorting to say, there was no crime committed.

Harper has to be nailed very quickly or, we will be given to Communist China. Harper signed a deal with, the Communist China Army. Harper has planned a massive resource project for China, in our High Arctic. Harper also gave China Novus Energy, another oil company. Harper's FIPA deal with China means, China will take Canada over for a, minimum of 31 years.

I watched the documentary channel last night. They are bringing over foreigners to train them, to work the oil patch. We have thousands of University, College and Trade School students with huge student loans to pay off. They have been applying all over hell's half acre for resource jobs. They are not getting those jobs and, now I know why.

I have zero faith in the RCMP to do the right thing.

When Harper wins the election the other "leaders" two will pull their typical party stunts.

Muclair will pull a Layton and drop dead in a few weeks, and good riddance to both!

Trudeau will resign the next morning and vanish from public life, just like Iggy.

What are your plans Simon?

Hopefully to rid people such as yourselves who have zero live brain cells and not even a tad of common sense. Bye anon. The con blogs love you but the rest of us simply laugh at your ignorance of real facts.you.

It is not beyond the realm of possibility that stevie slime has the most M.P.s in parilament next time. However, it is doubted his M.P.s will outnumber those of the other parties. It will then be up to them to co-ordinate their efforts to form a government.

A lot depends upon how much press the "senate scandal" receives in the MSM. It depends upon how things work out with the Quebec Charter. Never under estimate stevie slime. Of course when it comes to duffy, one should remmeber he certainly has been around a long time and knows where the bodies are buried. If he is criminally charged it could well be the end of the cons. However, it will be the cons who decide if he gets charged or not.

This is one where the thing isn't over until the fat lady sings or in this case the fat man sings.

Harper's renewed efforts to have a pipeline pushed through B.C. will also have an impact. There are a lot of con MPs in B.C. If the pipeline goes through, they could be gone. It would be up to the next P.M. to figure out how to get our country back from China. P.E.I. has regulations about outsiders owning land in their province. it may be in the best interest of others to follow suit.