The Wingnuts and the Muslim Menace 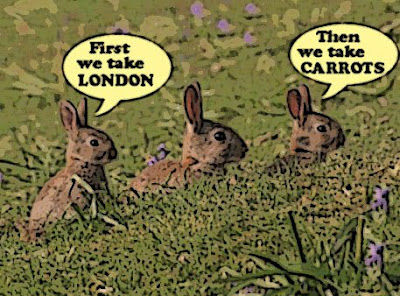 As we all know skanky wingnut racists like Kathy Shittle, Mark Steyn and so many others have made a career out of warning us about The Mooslim Menace.

How they are breeding like rabbits in Europe. How the poor white Europeans don't stand a chance against this seething mass of disloyal subjects.

Well the first part turned out to be completely WRONG.

And now the final blow.

The report by Gallup and the Coexist Foundation says 77% of British Muslims identified with the UK, compared with 50% of the general public.

"European Muslims want to be part of the wider community and contribute even more to society..."

Which makes me wonder what will the skanks come up with next to try to scare their cowardly redneck supporters.

An invasion of Mooslim faggots from outer space?

Or an invasion of Colombian chihuahas?

Because krazy is krazy eh?

Oh, MS, you know the usual suspects will just claim the Muslim respondents were lying to the poll, so everyone (everyone being the christian whites of course) would be lulled into a false sense of security and then...*bambinos*! With the kiddy creches kept on the grounds of extremist jihadi madrassas hidden behind the town commons!

Yes, Niles. Part of what we saw over at JJ's on a similar post. The 'We Love Steyn Who Is Never Wrong' paTROLL.

Hi Niles...oh yeah I'm sure the haters will claim the respondents lied on order from Bin Laden. But how are they going to explain the demographic study that shows that the Mooslim tsunami ain't coming?
Because without that one they got ZIP...

Hi Frank....I saw somewhere that Steyn was pulling figures out of his ass trying to make it look as if his whole career hadn't just turned to caca.Poor failed freaky theatre critics when will they ever learn? :)

I don't understand why you ally yourself to a religion that, in many parts of the world, holds a 14th century view of homosexuality.

Hi anonymous...I'm not allying myself to any religion...I'm an atheist remember?
And I dare say I hate Muslim extremists just as much as I hate any other kind of religious fanatics. And because I'm gay probably far more than you.
But the problem with the right is that they think they can kill or wish something away.
While I believe the best way to assure harmony is to make people feel at home, isolate the extremists, and absorb moderate ordinary people into our community and shared values.
Your way just creates more enemies, my way we win...