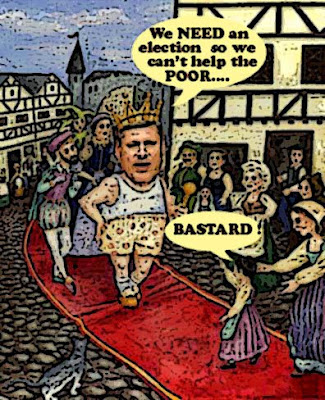 Uh oh. I see Great , , Loser Leader is threatening to plunge the country into an election....over the question of Employment Insurance.

You know the coldhearted bastard who said this about the unemployed.

"We are not interested in making it lucrative to pay people not to work, it's not what this government is about, that's not what the taxpayers expect us to spend money on...not making Employment insurance more generous"
Stephen Harper December 19, 2008

Which should look as pretty on the Cons in an opposition campaign ad in the middle of a recession.....as Stephen Harper in his underwear.

But if you want to get the true measure of how DESPERATE these criminally incompetent Cons are, all you have to do is check out their ridiculous attack ads.

The one accusing Ignatieff of not being Canadian enough. When their Great Leader Stephen Harper once said this about Canada:

“Canada is a Northern Welfare state in the worst sense of the term, and very proud of it.”

Which just shows how much he hates Canada and its values. Or the one where they accuse Ignatieff of being a "tax and spend Liberal." Which only makes these Bush Cons sound like the Republicans they are.

And not very CANADIAN eh?

But what makes me laugh the most is how they are trying to portray Ignatieff as an aloof, vain, intellectual. When Great Ridiculous Leader is an aloof, policy wonk who apart from a short stint at Imperial Oil, has never had a real job in his life. Never been ANYWHERE.

And a man so pathetically vain he hired a personal makeup artist to try to make him look PRETTY. 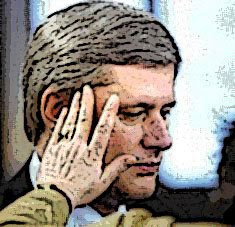 And besides what kind of idiot would launch attack ads against a leader who says he wants to "make Parliament work " and help suffering Canadians during a time of recession?

When we've seen them all before...

And all they'll do is remind Canadians what a crazy angry nerd Stephen Harper is and always has been. Which is a BONUS eh?

On the other hand if the Cons want a YouTube war, with Stephen Harper as the Ugly Republican. The monster who would turn Canada into a neocon jungle in the middle of a brutal recession. And can't feel the pain of Canadians, because he isn't Canadian enough to share our values.

This is an opportunity Ignatieff cannot afford to miss. Harper wants to force battle against EI in the middle of an economic meltdown? Yikes. Somebody in the PMO was asleep on that call.

Bring on the election!

Hi RevDave...yeah that's what I figure. At a time when so many Canadians have not only lost their jobs --- and so many others fear they may be next--- I can't think of a better time to fight an election over E.I.Especially as it could be the centrepiece of a strategy portraying the Harper Cons as not just incompetent but cruel as well.
Do you think the Progressive side will hire us as their advisers? :)

There are many hard working people who work long hours at back breaking work for much of the year and then collect UI, into which they have paid, and for a couple of months. Meanwhile the pigs at the trough fly on a special plane to India, have their own fleet of cars delivered by air so that they can travel around India to see its historic sites and for photo ops while claiming it is all about business. Monkey business it is. The sheer cost of this would provide UI to thousands for a couple of months. The people Harper attacks often have less than or barely more than the minimum wage, no health insurance, no pension plan. Contrast that to the high incomes some of these parliamentarians get, their very special health care, their gold plated pension plans for a few years work(?) like the trip to India, their lack of qualifications for their jobs, their special perks, their feeling of entitlement and all that entails, and finally their disrespect for anyone who is not a sheep blindly baaing behind as they follow the leader. Oh democracy, where have you gone? I cry for you Canada. Our government is the biggest bully in the country. Is it as secretive and paranoid as Germany before WW11?