Iggy and the Piggy Aporkalypse 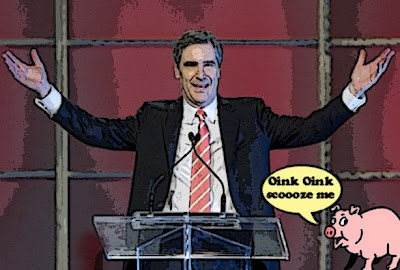 Well I see that Count Iggy has been officially crowned King of the Liberal Party.

And what a relief it was to get away from all that depressing Piggy Flu stuff.

At least that's what I thought it would be....

Until the horrifying moment....just as that boring introductory video was running.... when the CBC breathlessly interrupted its coverage to bring us this dramatic newser... 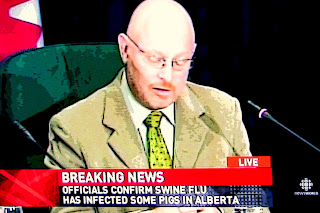 It wasn't anything we urgently needed know.

Alberta's top public health doctor, Andre Corriveau, said the fact the flu has been transmitted from humans to pigs is no reason to raise alarms about the severity of this flu outbreak.

"From a human health perspective, it's just an anecdote. We were already dealing with this issue in our population."

But it sure put a dent....or an oink....in the Coronation. Because going from the dreamy Liberal video, to the stark horror of the Alberta Aporkalypse, and back to the end of the video in about five minutes was a rather SHOCKING experience.

And I wouldn't be surprised if a lot of Canadians didn't even hear what Iggy had to say when the video ended....because they were too busy putting on oven mitts to throw their pork chops into the garbage.

And golly what a COINCIDENCE . A piggy newser timed to begin at the EXACT time Iggy was due to start speaking. You don't think Gerry Ritz or the porker Harper had their trotters on that one do you?

Although maybe it backfired, because it turns out less than half of Canadians are worried about getting sick.

Which I guess means they believe that the media has been pumping up the story, and the threat is receding.

While the others are more pessimistic...

But I must say one thing...let's give the CBC its due.

Who knew Iggy's Coronation could be such a memorable experience?
Posted by Simon at 12:01 AM

I, too, was watching Newsworld when the media presser came on. Switched to CTVNews to see if they'd cut away as well but they didn't. So was able to watch it there til it came back on Newsworld. Oh you can be sure Harper & Cons had a hand in this. The swine! ;)

I think CBC only cut away for a minute or so and then right back to the convention.

Anyone else - am I correct?

Hi penlan...yes I saw that too. CTV put up a crawl, and presumably played the tape later. Which is what the CBC should have done. I actually started off watching CTV but had to change the channel after that inflatable doll Tom Clark started sounding like Duffy ....

Hi sassy...oh no it was more than that. I saw from the YouTube that the Ignatieff tribute was 8 minutes long and I think they missed a good four or five minutes.
Which when I checked out the whole video was probably just as well....
On the other hand, this post isn't exactly a work of art either. Ugh.... :)