Harper, Quebec, and a Lesson for English Canada 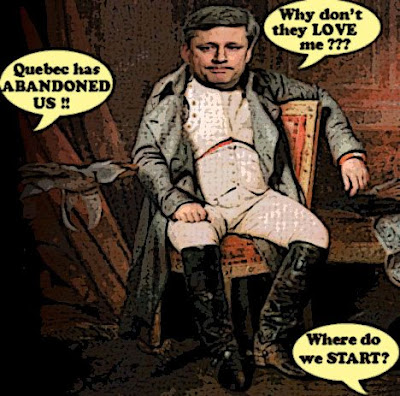 Well I see a new poll has confirmed what everyone in Quebec already knew, the Harper Conservatives are getting their asses kicked.

The Léger poll indicates that the Harper government's support in Quebec remains at only 13 per cent, which could possibly wipe out most of its 10 seats in the province were an election held today.

"This is catastrophic for the Conservatives," said Jean-Marc Léger, president of Léger Marketing. "Poll after poll shows they are losing ground. It will be a tough time for them."

And all over English Canada pundits and bloggers are trying to figure out WHY...like soothsayers groping goat guts.

I think Chantal Hebert gets pretty close to figuring out the real reason.

If there is a common thread to the Conservative predicament in Quebec, it is the pervading sense that Harper's political philosophy runs against the grain of the province.

Pratte alluded to the phenomenon on his blog, noting when Quebecers look at Harper these days, it seems all they see is his ideology.

But as someone who has one foot in French Quebec and the other in English Canada, I think it's even simpler than that.

I believe that the real reason Quebecers hate Stephen Harper's Cons so much is because they consider him "mesquin" or MEAN. He has offended their strong sense of Quebec/Canadian values for a whole bunch of reasons.

From his plan to jail children and his failure to rescue Omar Khadr, to his meanspirited cuts to the arts and the way he tried to turn English Canada against the province during the Coalition Crisis.

And because they have looked into his cold, cruel, dead eyes. 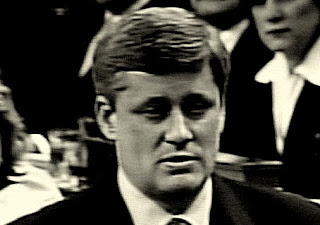 It's a GUT FEELING.

And those ridiculous attack ads will only reinforce why they hate him so much.

Which explains why many of them are switching over to the Liberals. Not necessarily because they like Michael Ignatieff, but because they know he is the only political leader who can get rid of this creepy monster. And they want that more than they want ANYTHING.

Meanwhile in English Canada....where feelings are sometimes confused with weakness, and meanness is often mistaken for strength... we get this result.

And I can't help feel feeling sometimes that our side just doesn't get it.

Cold arguments may damage the Cons, if the political ignorance of the population, and the Big Lie doesn't blunt their impact.

But gut feeling will KILL them. Especially in a time of recession.

Which is why I've been making these videos...

Because the day more English Canadians have the same gut feeling Quebecers have for Stephen Harper and his cruel and creepy Cons.....will be the day the nightmare finally ends.

Which I guess is the lesson eh?

From the Quebec part of moi to the English Canadian part of me. It's time to get in touch with our FEELINGS people. Oooh la la.

And then CRUSH these nasty Cons...

P.S. Sorry about repeating the video, but I needed it to make the point. I'm happy to report though I'm working on a new one....Bully Harper and Little Jimbo. It's a tragicomedy of idiots, a cross between Martian Invasion and The Omen. So you won't want to miss it eh?
Posted by Simon at 8:53 PM

Listening to Steve speak French is like getting boned without lube.

"English" Canada, Simon? As someone with a proud Celtic background, I am surprised that you -- a Scottish-born Canadian -- would fall for this common misnomer. English-*speaking* might be closer to the truth (although still not entirely accurate, to be sure). But to refer to all non-Quebecois as "English" is just... insulting.

To quote my uncle Liam, "Here's a long-standing traditional Irish toast, boyo... 'Confusion to the English!'" (followed by raucous laughter)

You're correct that the "mean" meme has resonance, Simon, although I note Harper's poor polling really got going after the failed NDP/Liberal coalition got slammed by the Cons so emphatically using anti-BQ (taken by many here as essentially anti-Quebec) rhetoric.

It also may be part of having tied his Quebec horse to Mulroney and his politcal connections in this province. Harper had to cut him loose, and so Mulroney's loyalists jumped ship from Peevey Stevie too. Then Lyin' Brian reminded us all of how disgustingly smug and self-serving he always was at the Oliphant inquiry; then add a soupcon of disastrous economy, Harper's deaf ear on EI reform, and the lack of funds to help Radio-Canada (as Chantal Hebert referred to in the link you provided).

Nobody here remembers anything they liked about his policies a year ago and more. It's the economy stupid. Plus Iggy is way more like Obama than Harper. And he plays to Quebec pride much like Martin did, keeping a good distance between himself and the Trudeau/Chretien/Dion tough federalism that gets the nationalist Quebec ire up.

Once an election comes around, the BQ had better be prepared to lose a few seats to the Libs in places they have been taking for granted for too long. And the Cons will be lucky to keep two to four seats.

Hi Mapko...not that I know anything about those practices...but I gotta believe that listening to Harper speak anything is definitely WORSE... :)

Hi 'berto....you know you're right. And I apologize. I'd be even ruder about those cursed Sassenachs...or English dogs...if my mum wasn't born in Kent... :)
Perhaps the best thing to say is "the rest of Canada."
But then that would include the rednecks in Alberta and that sounds...um...funny?

Hi Scott...I'm glad you came along to provide some serious comment... ;)
You're right about the Coalition crisis The arts cuts helped set the table. As did the juvenile sentencing outrage...in a province justifiably proud of its progressive and successful programs for juvenile offenders. But the Colaition crisis and the way Harper turned from wooing Quebecers to implicitly attacking them, was the final straw.
The Mulroney split has certainly divided what's left of the Big Blue Machine.
But the word I most often hear from my friends is the word "mesquin."
And as I said, the good news is that once you get tagged with that
name, everything else plays in to that narrative.