Stephen Harper and the Big Torpedo 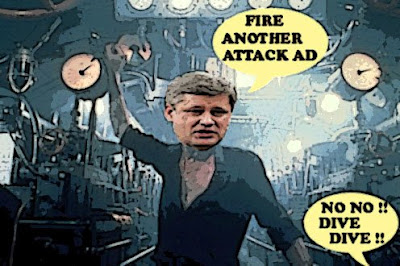 Of all the bad reviews of Stephen Harper's pathetic anti-Ignatieff ads, I think I like this one the BEST.

In the film The Hunt for Red October, the final showdown involves a torpedo fired by an enemy sub that -- through skilful piloting by the good guys -- ultimately locks onto and destroys the vessel that launched it.

Before they armed the warheads and hit the "Fire" button on their latest attack ads, Stephen Harper's Tories might have been wise to sit through a special screening.

But of course they didn't. So the big torpedo pulled a u-turn and flew up Great Das Leader's gaping booty. KABOOM !!!

Instead of fixing a negative, disparaging storyline to the new Liberal leader, the Tories may succeed only in reinforcing a damaging narrative about themselves -- as angry, slightly mean-spirited, defensive folks who believe the way to voters' hearts is to call other people names.

OMG. I mean DIVE DIVE !!!! It doesn't get any better than this. Somebody in the stinky PMO sardine can is going to pay for impaling Captain Nasty on his own ,, attack ad.

Because it's cost the Cons an early election.

It almost certainly means the ads have backfired. And they're running like COWARDS.

Which reminds me.... the other night I took aim at Stephen Taylor for trying to defend the creepy cowardly Con ad campaign.

And for running a tacky video of Keyboard Cat playing out Ruby Dhalla.

When EVERYONE knows that the Kat plays for our side.....

Now all I can think of is BAD STUFF HAPPENS.

Golly. I wonder if that's what Stephen Taylor is going to say when Great Very Angry Leader calls him into his office? Or will he blame Steve Janke?

Or another useful idiot. Muahahahaha.

Oh boy.These nasty sleazy Bush/Cheney HarperCons are being played ...or exploded... out of history.

I like the submarine analogy.
Harper will run out of torpedoes before the internet runs out of depth charges.

This next election will "turn" on the internet--not television or other mass media.

Whoever's smarter and more media savvy will win and Harper's penchant for painting himself into a corner will not hoist him out of some embarrassing situations.

Ignatieff is far smarter and far more dignified than Harper and those Canadians who don't realise it are doomed to repeat the same mistake over and over.

The "Leaside Curse" will remain with Harper the rest of his days.

Hi Torontonian...yes the submarine analogy is a good one.
And what I especially like is that every time these weird, ugly,lame ads play it's like they're depth charging THEMSELVES.
What amazes me is that these attack dogs don't get it. Their hideous ads may have helped bring down Dion, but they won't have the same effect on Ignatieff. And if he plays it cool and dignified, the Cons will look like thugs.
I'm hoping the internet will help the Progressive side counter the Cons with their super War Room *fart* and their suitcases of cash.
BTW what's the Leaside Curse? It sounds wonderful... :)