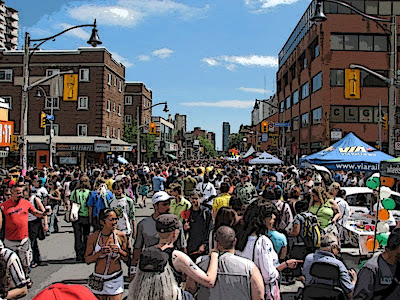 Every year during Gay Pride Week I get to watch hundreds of gay couples walk up and down Church Street shyly holding hands.

The only place and the only time most of them dare to do that.

Which makes it both a moving sight....and a very sad one.

So imagine my surprise when I discovered that now we're asking straight people to take part in some same-sex hand holding.

You don't have to fight to change the world. Promote love and equality by the simple act of holding hands.

Which annoys me because you DO have to fight to change the world. And leaves me thinking that this has to be the sweetest but dumbest idea since Call in Gay Day.

Except that this time straight people could get hurt.

So I would just like to suggest that if any straights do decide to take part in this event they should take the following precautions:

(1) Before going out make sure you write your blood type with a magic marker on each arm.

(2) Wear t-shirts with something really clear like "Don't Kill Me I'm Straight."

(3) Don't forget to look over your shoulder so you can see the brick coming for the back of your friend's head.

(4) Learn some karate like I did....or carry a baseball bat in your pocket.

Because while I hold hands, or hug, or kiss Sébastien whenever I damn well feel like it, I'm prepared to fight for that "privilege." Every day of the year. And with all the homophobes still out there they may have to fight as well.

Oh sure I know, I know. It's an ugly world. But that's the world WE are forced to live in.

And asking straight people to hold hands won't change ANYTHING.

On the other hand when it comes to fighting hate on the internet I sure love this video...

Because it's the attitude that counts.

I'm sure the people behind this dubious project have their hearts in the right place. And I'd love to live in a world where everyone can hold hands.

But first you've got to deal with the REAL problem...the bullying and the bigotry.

h/t Gay Persons of Color
Posted by Simon at 6:37 PM

Great post - thanks for sharing the video... it made my day.

MS, it might be very enlightening to 'straight' people if they do the simple act of holding hands with a same sex friend and find themselves violently assaulted and battered. Nothing like a little 'walk a mile in their moccasins'.

Then again, given the social taboos in 'developed' countries about same-sex hand holding that makes it a queer act (nevermind the mores of all those Other cultures where it's just a sign of friendship), those choosing to hold hands in public might be aware of the 'challenging gender conformity' danger they're inviting.

But I suspect, as usual, it's going to be the younger generation that tells us all to go to hades in a handbasket. Just last week, as it was *finally* warming up, I spotted a couple of girl teeners as I drove past the high school flow. They were snugged up for some obvious cuddle time.

Now *me*, I went 'that's so cuu...omigod..cranecranecrane looking for thugs'. Them? they were on a sidewalk a couple of blocks from school, in full view of afternoon traffic. Oblivious. I don't think it was guerilla cuddles.

Mass might be what's needed. Maybe the bullies won't know who to attack first and get exhausted just thinking about it (and yes that was a snark about bully mental strength).

You know, this takes me on the way back machine to the early nineties. I was walking with a close friend of my recently deceased lover... that's a long story...

Point being that without holding hands or even walking terribly close to each other I was walking with this man down a street in none other than San Francisco and some young.... men questioning this manhood in a muscle car... decided how great it would be to yell at us and throw a beer bottle for the sin of walking down the street.

Often, I wonder why I'm not more violent towards these people...

I'd also like to complement you on your prose.... perhaps you might never win some prestigious award for great writing, but I read you because you often bring images, important ones, from my past to my attention where I open them like presents gifted to me.

Besides, I think you deserve that award.

Hi Jame in TO...thanks I'm glad you enjoyed it. I'm afraid I was a little harsh on the hand holders. I really should save that kind of criticism for our enemies...because everything that contributes to making a kinder gentler world is worth supporting.
In fact I felt so bad about that I wrote my latest post on that subject.
But the video was great wasn't it?
Now that's the kind of attitude I LOVE... :)

Hi Niles...as I just explained to James I'm afraid I went a bit overboard. Gawd what a precious little Miss Grinch I can sometimes be. Because actually it would be good if straight guys took a few steps in our mocassins...and anytime any combination of humans hold hands it's a sweet thing.
I find it charming how straight men in other cultures can do that with their male friends.
And you're right the new generation will lead the way. I think I wrote about how I saw two young gay teenagers walk hand in hand through a football crowd at the Roger's Centre.
And the more people who do it the more normal it will be.
You know... if we survive Harper, the recession, and the pig flu, we might just end up in a better world. Wouldn't that be a surprise? For a grinch like me. ;)

Hi PeterC...thanks for your kind comments. It's very encouraging. I'm sorry to hear about your bad experience, and in San Francisco of all places.
But then it can happen ANYWHERE. Some white trash in Toronto once threw a half full beer can out of a passing car and just missed Sebastien's head. And another time I was giving a friend a tour of my Montreal neighbourhood...and bragging about how gay friendly the city was...when a car zoomed by, a guy leaned out of the window and shouted "Faggots" !!! :)
Gawd. When you think about it some people are CRAZY...

Hey folks,
Thanks for publicising our campaign.
I understand you're reservations and your objection to our peaceful campaign....you're right, we never do stop fighting do we..

Yes I have been beaten up for holding hands. In the UK we have full equal rights enshrined in law for gay people (except marriage- we have civil partnership, exactly the same but the name).

I created the campaign as a tool to challeneg homophobia. seeing 1 couple holding hands in the street does more to challeneg homophobic perceptions than any pride, because it usualises our existance. Yes we live, breathe, love, walk and shop at the same stores everyone else does. The campaign does not advocate people holding hands in dangerous situations. If you really look at the website you'll see we advise people to do it as best they see fit, in small doses, in subtle ways.

We can't keep complaining about homophobia if we do nothing about.
For those not engaged in the legal battles for equality, A Day In Hand is about empowering LGBT people to be themselves and change cultural attitudes so we are afforded equality of respect.

The stories that are coming in for the campaign show that homophobia doesn't have to be the flip side of being gay, and the world won't always fall in upon us if we are ourselves in public.

I love all the comments on this blog. I would love it for everyone to send in pics of public same-sex hand holding to yourstories@adayinhand.com

ps i see your comparison to Call In Gay, but A Day In Hand really is more proactive and sustainable as a campaign and hopefully longer lasting. I contacted the folks at Call In Gay to give advice with A Day In Hand. I heard nothing back.