Being Gay and the Cacophony of Hate 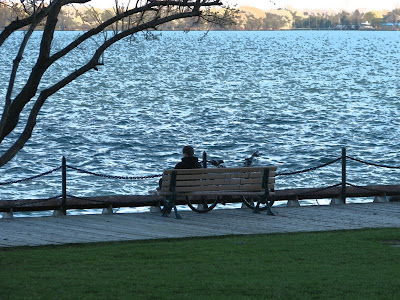 One thing about being gay that no straight person can understand, is how wherever you go you can't get away from the drumbeat of oppression.

Like try to ignore what happened to my brave brothers and sisters in Moscow today.

When it makes me so angry.

Or pretend that I didn't hear about how the Republicans are planning to try to turn gay marriage into a more effective weapon.

Republicans can reach a broader base by recasting gay marriage as an issue that could dent pocketbooks as small businesses spend more on health care and other benefits, GOP Chairman Michael Steele said Saturday.

When I did and it makes me want to VOMIT.

Or how I can't block out the hideous sight of Christianist bigots using innocent children against us....

It all adds up to a cacophony of hate that you can't escape.

No matter where you go.

Which is what I think is what vimeo artist Matthew Brown is trying to convey in this video.

Does he succeed? I'm not sure.

But I'm sure proud of my brothers and sisters, for living, loving, and fighting FOREVER.

I don't think a lot of straight people could understand the relentless, stern disapproval (to use the very politest term) that gay people are exposed to all the time.

Even straight allies can only empathize; feeling it for yourself is very different. "I don't like you, you don't deserve these rights, you're destroying society, stay out of public," etc., etc., ad nauseum.

Yet if the smallest action is taken to protest this, that same voice of oppression throws up its arms: "You're violating my freedom! Unacceptable!"

(As if tolerance ever meant having to to accept attempts to tear down tolerance.)

I think it takes a very strong character indeed to be able to put up with all this ridiculousness.

47% of Canadian faggots taking part in an online survey conducted by XTRA magazine openly admit to sodomising children under 18 years of age in blatant violation of Canadian sodomy laws.

Hi Mapko...yes sadly some of the closeted types can be our worst enemies.And it's so sad to see a country like Russia reduced to such mindless barbarity. I try to see the good in every country and there is so I admire about Russia. It's rich culture, its heroic efforts during the second World War, its scientific and space achievements. So to see the land of Tchaikovsky act like this is very depressing. But then the brave gays, lesbians and their friends who are standing up to these fascists fill me with pride.
So along with the bad comes the good... :)

P.S. And of course in the end we WILL overcome...

Hi Mark...thanks a lot, and of course I'm extra honoured when it comes from you...such a fantastic gay blogger.
You know I'm always reluctant to say that straight people can't understand something, because I'd rather stress the 99% of things we have in common. But in this case I think it's fair to say that. In fact it's not only straight people...I find a lot of gay people have come to take it for granted. As in that is the way things are and we'll be dead before they change. When of course it's outrageous that we should have to put up with so much mindless prejudice.More than outrageous INSANE.
And that neverending dripping tap of hate can do a lot of damage.
Which is why you're right it does take a very strong character to put up with that ridiculousness.
I like to think that what they can't break ...they only make STRONGER.
Keep up the good work brother... :)

Hi anonymous...you know the only reason I didn't delete your disgusting comment is because it kind of works with the post. Just another example of the cacophony of deranged hate we have to put up with every day of our lives.
And also because I wanted to point out to you that like most homophobes you are so incredibly dumb that you can't even understand a poll. You idiot.
But then your second comment arrived and it was so downright filthy I realized you were just K...K....Karol. The creepy old guy who trolls like a pervert at gay and feminist sites.
The one I delete instantaneously ....no matter if it's about three miles long.
And as you know I only have one message for you:

Oh Karol I am but a fool.

Baby I love you

Though you treat me CRUEL...

Now button up your raincoat you freaky bigot.

And go FUCK yourself....

hi sassy...good one...
I'm afraid I'm not a good gay boy like Mark...although we love him just the way he is.
So unfortunately I probably wouldn't use a gentle word like ridiculousness. Ahem... :)
Although it is ridiculous.If only these homophobes had a mute button...