The Ballad of Jimbo Flaherty: The Video 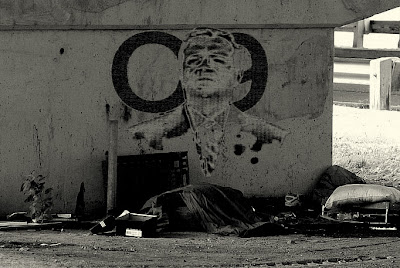 When I think of Jim Flaherty I can't forget how he treated the homeless when he was the brutish Con Mike Harris' Minister of Unemployment/Misery.

And how he wanted to jail them.

So it doesn't surprise me that he's killing our economy.

And still claiming that others were as dumb as he was.

Even though all the others at least knew a recession was coming...while he was still predicting SURPLUSES.

But then of course the wretched little Con gnome is also a victim... of his own greed and stupidity.

As I try to point out in this video.

You know in addition to being an absolute idiot little Jimbo is also a rabid theocon. Which makes me wonder who he's taking instructions from these days.

The ghost of Mike Harris, the crazed Stephen Harper, the Wheel of Fortune....or his Lord?

Now more than EVER.

Anyone need a used garden gnomeNot THAT one, I know where it's been.

Hi sassy...thanks I'm glad you liked it. I'm afraid I'm not in the same league as some of the other progressive Youtubers. But I'm just playing around trying to learn as much as I can, so I'm ready for an election
If Harper Nixon has tapes on Iggy, I want to make sure I have plenty about HIM !! ;)

P.S. yes I'm sorry I forgot to mention that the gnome has been in the manure heap for a long long time.But a good scrubbing with a wire gnome brush should do it. :)

UPDATE: YouTube has been acting up for hours and videos aren't loading properly. Yikes. I'm beginning to think that my climb to fame in the video world is going to be slow and painful...

I am still applauding!
Nifty images,concept and sound track.
Reminded me of that nursery rhyme about little Jack Horner, eating his holiday pie. He stuck in his thumb and pulled out a plumb (a $50 Billion one) and said:" My, what a good boy am I!."

Hi Oemissions.... thanks for the encouragement. I needed it. I'm afraid my last two videos haven't been too well received. I don't know why. Some anonymous commenter said my first Harper video was "the worst attack as ever." But I told him I though my first Jimbo one was. And I'm proud of it !! :)
I'll say this though...I'll be better when Sebastien buys me an HD camera for my birthday....or else.
And it's sure a lot of fun...