The Tamil Protests and the Dead Kid 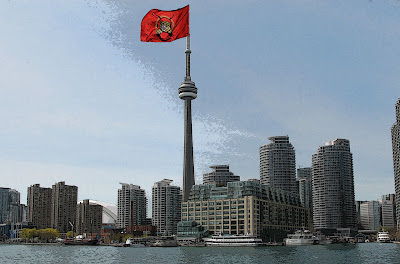 Sometimes I'm glad to be able to get away from Toronto, because this week all anybody seems to be talking about is how the city has been taken over by the Tamils.

And it's driving me nuts. I've never heard such an avalanche of outrage over such a small peaceful protest. Nobody was hurt, a few drivers were delayed in traffic. In a city that can be as boring as batshit, it was the best show in years.

And in all the overheated ugly talk about these ,ungrateful immigrants, hardly anyone remembered that the Gardner Expressway had been blocked before by some dangerous looking white radicals.

So what's the problem eh? Not racism I hope.

And besides if people want to be outraged they should save it for this story.

That was buried by the story about the traffic tie-ups.

Because it's so sad. Witnesses said the kid was crying as his short life slipped away from him.

And unlike the Tamil protests that are just an inconvenience, and as far as I'm concerned a very small price to pay for the pleasure of living in a vibrant multicultural city.

What's happening to some mostly black kids in some neighbourhoods is a tragedy.

And a REAL problem...

Stop the bullets. Kill the gun.

Support our Tamil neighbours. Understand their pain and desperation.

It's hard to be sympathetic to people who hold us hostage in our own city. Their boorish behaviour has inconvenienced us several times and further estranges us from what they are advocating. I haven't mentioned how their actions can impede emergency vehicles and thereby create a worse problem for public safety. That type of behaviour might be how they act back in their home lands but not here. If they want to live in this land, they should behave like the rest of us in matters of courtesy and civility.

Their argument is with Ottawa, not us. The most effective thing they could do is embarrass the Harper government and work for its defeat.

Instead, they are defeating their own purpose by acting in such a way that does not show them in a good light.

because I don't agree with the method of their protests I'm a racist?

Maybe I just believe in law and order, and that just because your story is sad and I feel bad, that I don't think that an excuse to break the law as they've done so blatantly

Hi Torontonian...et tu Brutus? :)
Look I realize I'm very alone on this one. Even Sebastien was annoyed with the Tamils for demonstrating too close to Hospital Row where he works. And I was inconvenienced too. There were so many cars crawling along the waterfront...after being diverted from the Gardner... I almost missed my ferry. And I could smell the stinky fumes in the middle of the bay.
But as I said that's what happens when you live in a big multicultural metropolis. The gays have their traffic blocking weekend, the Sikhs have their wonderful Sacred Elephant parade,etc etc and I love them all.
I realize that this city that I have come to love is a little staid...and that's not all bad. ;)
But what I think people have to do is remember that the Tamils have lost a long war, and are very fearful of what might happen to their relatives and others. And that with reports of massacres...real or imagined...they are desperate to get the attention of the world. So even if you disapprove of what they are doing to get that attention, we should try to imagine how we would feel if we were in their shoes...

Hi Andrew.... no I'm definitely not accusing all those who oppose the Tamil blockade of being racists. Respecting the law is important and you have every right to feel like you do. And I furthermore recognize that we don't have the slogan Peace ORDER and Good Government for nothing eh? :)
All I'm saying is that there was a lot of racist talk in the air.
And we should all chillout because there's far more important things to be bothered about...

Hi Militant Dipper...thanks so much. Whew. You came along just in the nick of time. I've been cruelly treated...even by my friends. :)
But I mean REALLY...a whole town boiling mad because of some traffic jams? Gawd. Everyone should just chillout and show some empathy. Because there are so many real things to get angry about and life is too short.
So I'm glad you agree with me because that makes TWO of us. And there's strength in numbers... ;)

" . . . But as I said that's what happens when you live in a big multicultural metropolis. The gays have their traffic blocking weekend, the Sikhs have their wonderful Sacred Elephant parade,etc etc and I love them all.
I realize that this city that I have come to love is a little staid...and that's not all bad. . . ."

Those are events to which permits have been issued and are organised with enough advance notice that the genenral public knows about whatever "inconvenience" those events will cause.

The demonstrations have been impromptu and without permits and consequently and inevitably an annoyance to the general public.

That's incivility and rudeness and impoliteness. We live to a different standard and those who live here should cleave to it in order to gain the respect of the rest of Canada.
----------
Perhaps the two elements of your story should have been kept apart in separate articles in order to avoid the Scylla and Charybdis dilemma that you've put most of us in. Each story has its own merits and ought to have been considered separately.