Michael Ignatieff and the Moral Quagmire 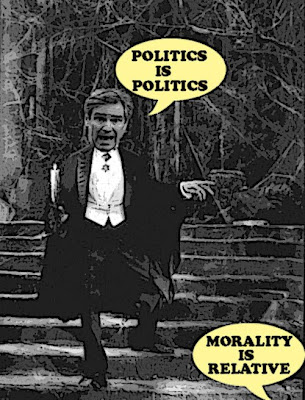 I have tried to stay away from criticizing Michael Ignatieff, because he is the only political leader who can bring down Stephen Harper, whether we like it or not.

I was even prepared to cut him some slack for what he had to say today about the Coalition.

If the proposed coalition of opposition parties had come to power last year it would have deeply and enduringly divided Canadians, says Michael Ignatieff.

“I'm in politics to unify people, not to divide them...There was also a question concerning the legitimacy of the coalition that troubled me.”

Even though I don't agree with him. Legitimacy wasn't a problem. The country is as divided back then as it is today. And killing the Coalition that represented the views of most Canadians wasn't a grand unifying act. It was an act of supreme political cowardice.

A decision that condemned hundreds of thousands of unemployed Canadians to lives of misery because they don't qualify for E.I. And left the country, at a time of crisis, in the hands of a bunch of Con thugs who don't know what they're doing.

And because actions have consequences Omar Khadr is still in Guantanamo, and Abousfian Abdelrazik is still stranded in Khartoum. And so on and so on.

But whatever...it's no use crying about what might have been.

But how can Ignatieff and the Liberals justify their support for this wretched bill?

Under Canada's proposed new drug laws, an 18-year-old who shares a joint with a 17-year-old friend could end up in jail.

The Conservative government proposes to automatically jail dealers and growers at a time when several American states, most recently New York, have retreated from mandatory minimum sentences, saying they are a glaring symbol of the failed U.S. war on drugs.

I realize that Stephen Harper is playing cheap politics, but does that mean the Liberals have to jump into the moral quagmire and roll around with him?

Just because they are too AFRAID to do the right thing?

While the New Democrats and the Bloc Québécois have voiced strong opposition to Bill C-15, the Liberals have indicated they will support it when it comes back to the Commons for third reading.

Why? Not because they think it is sound policy; they acknowledge in private that it is not. Rather, the Liberals do not want to give the Conservatives an opening to accuse them of being "soft" on crime. This is craven politics at its worst.

I know politics is politics eh? But cowardice has consequences.

What kind of country makes its unemployed suffer, and would fill its jails with kids?

Nothing to do but boycott the Libs/Cons, they are too much alike.

Ignatieff has shown his hand once again, to stand with Harper and the cons. There is just no light between them.
His position on supporting Israel bombing of Palestinians was disgusting.
Iggy is neocon loving neoliberal in a red shirt, nothing more and nothing less.

Hi anonymous...as one who dreams about the uity of the left and the leftish united to crush the Harper Cons, I am reluctant to become too partisan.
Because ANYTHING is better than Harper.
It's a position that doesn't win win me any brownie points from my NDP and Liberal friends.
But as I tell them somebody has got to be the Peace Ambassador.
And I volunteer... :)

Hi Jan...speaking of partisan. Ahem... :)
But at least I can rest easy knowing that the Bruce will always be ORANGE !!
Seriously though I respect your views on Ignatieff. And I would add his praise for the Oil Sands in my cricisms of him. On the other hand I'm afraid I'm a bit of a political slut. As in for the time being, at this critical time in our country's history, I'll sleep with ANYONE as long as they fuck Harper ... :)

Quite the contrary. Most Canadians wanted an election in the event of a defeat of the Conservatives.

It turns out that the view of most Canadians was that even if they didn't want the Conservatives to continue governing, they certainly didn't want the coalition to take over -- and certainly not that soon after an election in which the party that would be supplying the Prime Minister had just absorbed the worst defeat in its history.

How could such a government -- one vulnerable to the whims and demands of a separatist party -- even begin to be viewed as legitimate?

It couldn't even begin to aspire to legitimacy under those circumstances.

Hi Patrick...what you say is true, but what you're talking about is tactics. All I'm trying to say that if the Coalition had come to power it would have been a perfectly legitimate move in line with our parliamentary system. Not a coup as some said. And when Ignatieff tries to spin it into a great act of national unity, he's just spouting hot air.
You know maybe Canadians would never have supported Dion as Prime Minister, but the idea is a good one, that will come back to haunt you guys some day... :)

I've voted Liberal my entire life but bill c-15 mandatory sentencing would see the end of that, I'd vote NDP all the way, they fight for the Canadian way of life, they don't cave it to USA style fear tactics. Too bad most the Canadian population has been brainwashed by US crime shows. Anyhow i call Liberal MPS EVERYDAY to push them far away from supporting the Bill. We have all summer to make a difference, pick up the phone and give em hell!