Swine Flu and the Mutant Threat 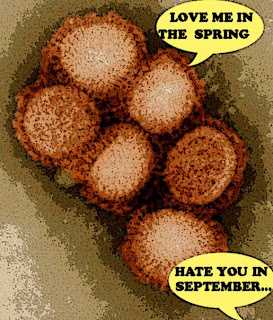 Well nothing but good news to report today about the story nobody wants to talk about....the bug in the barnyard.

Like the news that the Mexicans have been able to hang on to their sense of humour.

To alleviate the boredom of a five-day lockdown in the capital, Mexicans have been gathering in apartments, or joking online. "There's a new tool in Facebook called, 'Who would I cough on if I had influenza?' and you can choose up to five characters," Mr. Talamantes said. "People are playing with that and choosing politicians."

Or the story about how the British are being encouraged to have flu friends.

But the best news of the day was that I finally was able to convince my beloved friend Angus ...who believes the pandemic threat is a just a plot to make us forget the recession and panic us into fascism...about the real dangers of mutation.

By pointing out that the mild virus that's visiting us in Canada, could be a more lethal variety in the fall, after it visits the Southern Hemisphere.

Where surveillance is weak, seasonal H1N1 flu strains are almost all resistant to Tamiflu...so if they swap spit with this new bug anything could happen.

And by showing him this video...

After which all he could say was "gross" and "SCARY."

Excellent dude. What would we do without YouTube eh?

Now forget about that fascist plot. Wash your hands.

You're right about the mutating & also I've learned that with some "pandemics" they recede then pick up again a short time later.

An interesting note that the stocks of Tamiflu are about to reach there shelf life date & need to be used or they will be tossed. AND Dick Cheney is now employed by Roche, who makes Tamiflu. Don't know in what capacity Cheney is employed. Makes for interesting thoughts, non?

Hi Penlan... you know the bottom line is that we've never seen this virus before in pigs or humans so until we figure out what it's going to be like in a regular flu season we can't be too careful.
The Tamiflu situation is also very worrying. In my opinion that drug should have been kept under lock and key in hospitals...and only used to treat the critically ill.
In the 2007-08 flu season 28 % of the H1N1 strains were resistant to Tamiflu. Now it's 98 %.
But of course we don't want to put a dent in Roche's piddly profits, or ask why Big Pharma doesn't put more effort into coming up with new anti-virals....instead of cosmetic products.
And now that you tell me Cheney is involved I'm starting to think that maybe I've been too naive. And it is biological warfare !!! :)

"And now that you tell me Cheney is involved I'm starting to think that maybe I've been too naive. And it is biological warfare !!! :)

Lol - solution: we must have ALL body parts, skin included, replaced by some kind of metal, like robots. We will then no longer be "biological" & will have complete immunity from any type of virus, bacteria, etc. ;)