Is This the End of the Free Internet? 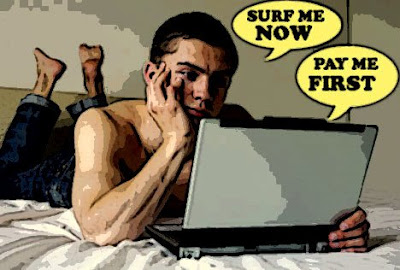 Or the beginning of the end? Maybe. If Rupert Murdoch gets his way.

Rupert ­Murdoch expects to start charging for access to News Corporation's newspaper websites within a year as he strives to fix a ­"malfunctioning" business model.

"The current days of the internet will soon be over."

But only if his competitors do the same, and form some kind of news cartel.

"Newspaper industry should just die and journalism should be democratized. We have blogs, forums, news aggregators... why should I pay for content that someone else can write just as well if not better than the biased reporter/editors at some giant media conglomerate?"

But others not so much.

"I would gladly pay for the service that reporters provide to me! I know it costs money to investigate and report the news and I don't want the news to be controlled by advertisers."

"Pay for news? We have to, unless we want to get our news from a bunch of people who think because they have a blog they are a journalist."

And what's the alternative?

"We have to look to a future of smaller journalistic staff and greater user participation..."

And is that what we want? More information than ever before, and fewer journalists to make sense of it?

Is that really all she wrote?

Maybe it’s because I’m staying at the Sunset Tower on Sunset Boulevard, but I keep thinking of newspapers as Norma Desmond.

Papers are still big. It’s the screens that got small.

As a disgusted Desmond asks from behind dark glasses: “And who have they got now? Some nobodies — a lot of pale little frogs croaking pish-posh.”

Oh boy. I'm not sure about the future of online news...and the internet as we know it.

Well, we already pay for it in a way. Have to have an Internet Provider & the prices keep going up, here in Canada anyway. There's only just so much people are going to be willing to pay & I, for one, will never pay for online news. There's always radio & T.V. (which we already pay for via Cable).

Hi anonymous...I find it hard to believe also. But what I worry about is that a lot of good stuff is going to end up behind a pay wall. Because if you can't pay your journalists, and the current model doesn't work, what are you going to do?

Hi penlan...you're right everything is getting more expensive, and now you have to pay to get what you used to get free before. And if the big TV network get their way we'll soon be paying extra for them as well.
You say that you would never pay for online news, but if many of the best news organizations are behind pay walls would you still feel the same way? I'm not sure I would. But maybe I'm being too pessimistic and the New Media Age will be better than what came before....just different.
I hope so because having to choose between food and good online news wouldn't be good... :)

Hi moralde...yup...you're right about that one. I guess what happened is that the recession speeded everything up. A few months ago they were just declining. Now they're collapsing...

Simon:
"You say that you would never pay for online news, but if many of the best news organizations are behind pay walls would you still feel the same way?"

Actually, yes. For the simple reason that I couldn't afford it. No extra money to squeeze out of my very feeble income & things will continue to rise in price, on everything, so eventually I may not even have Internet.