Toronto Pride and the Inspiring Courage of Justin Trudeau 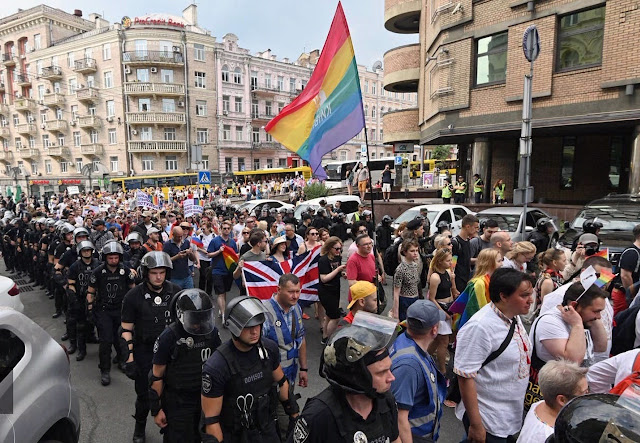 In the Ukrainian capital of Kiev yesterday about 8,000 people took part in a Pride march, that country's biggest one ever.

It was a proud moment for that country's oppressed LGBT community.

But police had to protect the marchers from neo-Nazis and other fascist scum who were threatening to attack them.

And if you thought that a similar threat couldn't happen here, at Canada's biggest Pride parade, you'd be wrong. 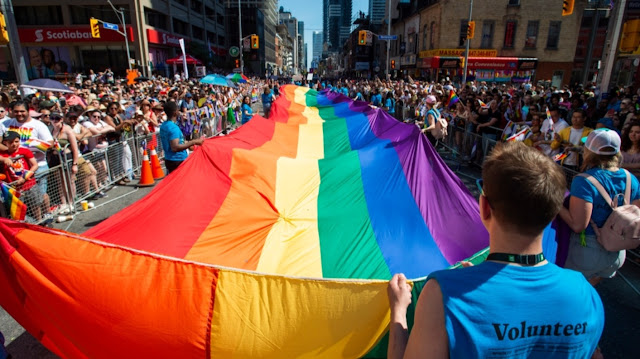 For a group of far-right extremists were reported to be planning to attack yesterday's massive march in Toronto.

The same ones who had violently disrupted a Pride festival in a Hamilton park a week ago.

So police could take no chances, security was stepped up, and there were even RCMP snipers on roof tops overlooking the parade route. 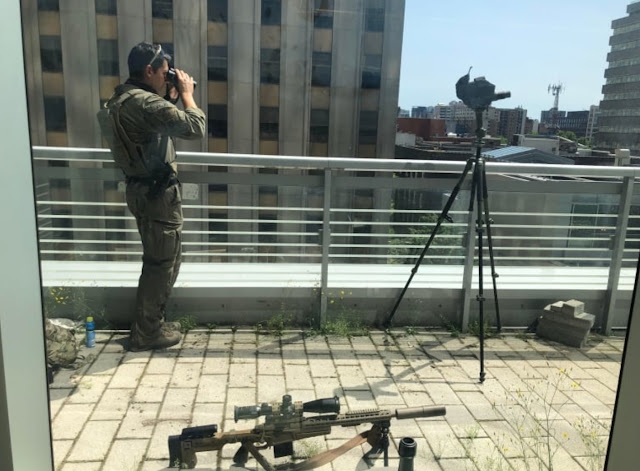 Which made Justin Trudeau's decision to march at the head of the parade, and down the middle of a crowd of about a million people an act of remarkable courage. 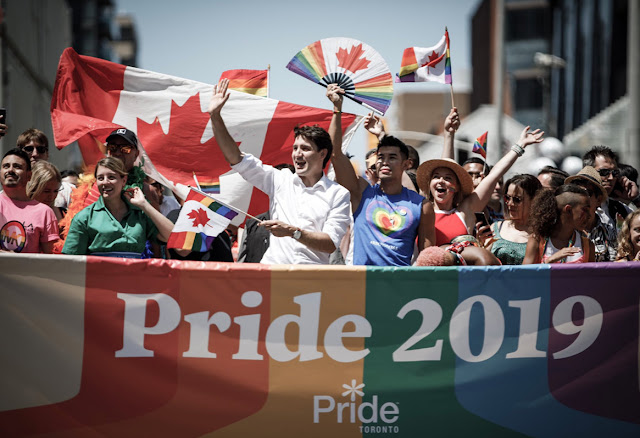 And one that inspired all those who were there, including myself. 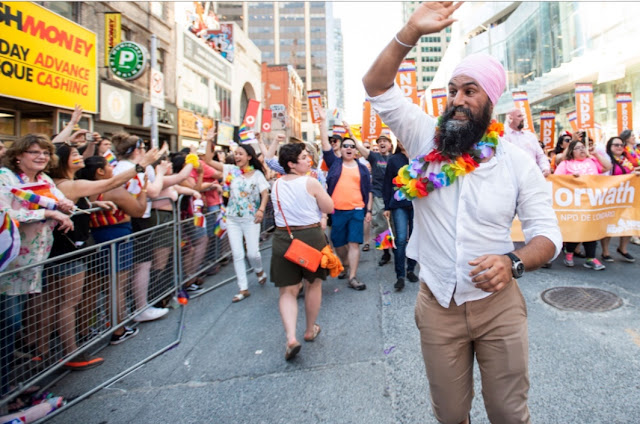 As did Elizabeth May... 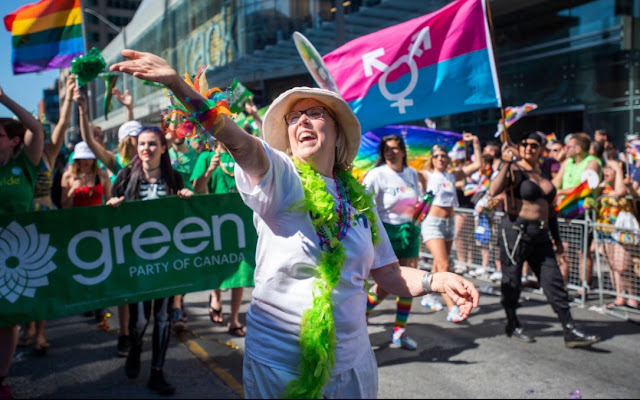 And both deserve credit for showing their solidarity with LGBT Canadians, and for marching in a parade that on a hot day took four and a half hours to complete.

But it was Trudeau who has a target painted on his back thanks to all those who threaten his life all the time... 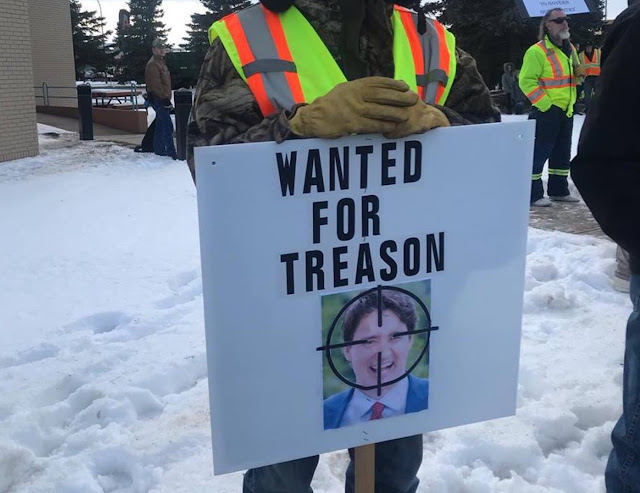 Or whip up hatred against him day in day out, like the ugly Con homophobe Andrew Scheer... 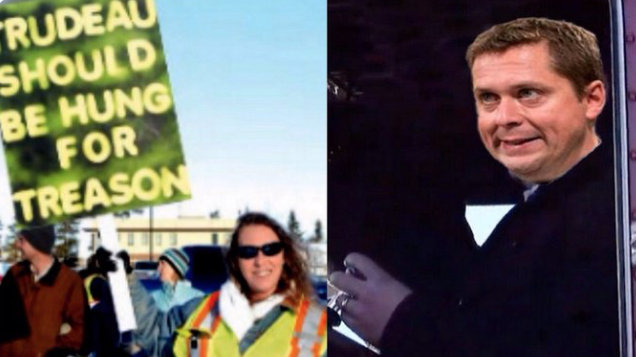 But somehow our young Prime Minister doesn't let any of that get to him, and yesterday his unspoken message couldn't have been more inspiring. 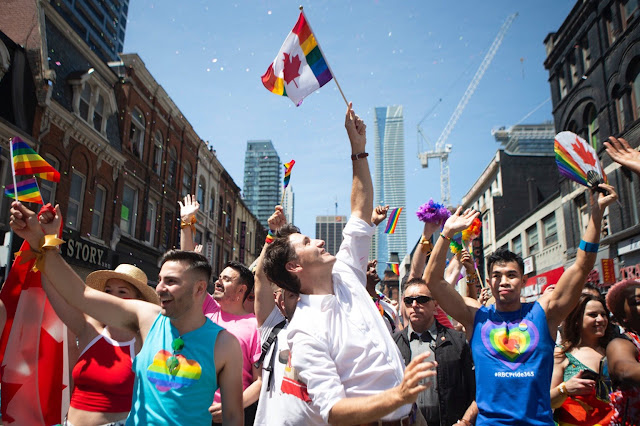 For it seemed to me that what he was saying was, I am not afraid.

And all these Canadians aren't either... 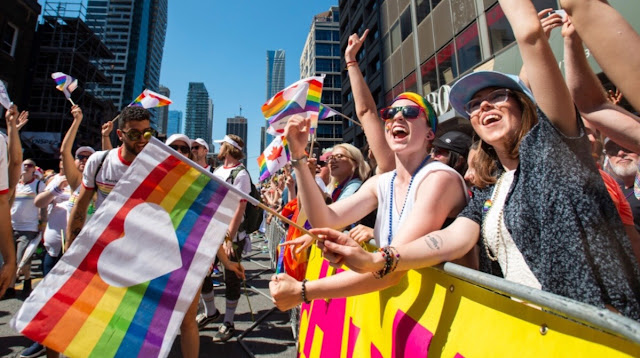 You know,  I sometimes wish that Trudeau didn't wade into crowds so fearlessly as he does, for this is a country that is slowly being poisoned by hate.

And he is risking his life every time he does.

But then he wouldn't be who he is, the son of Pierre, if he didn't.

And he is standing up to the bigots and bullies as his father would have wanted... 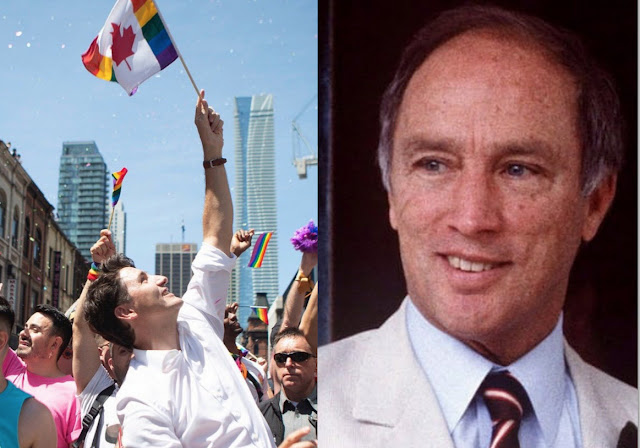 So the best thing we can do, is vote to give him another strong mandate.

So he can go after the hate mongers and make us all safer...

Happy Pride, Simon. He really is his father's son (and, he would proudly say, his mother's son too). Pierre in 1969 famously declared that "there is no place for the state in the bedrooms of the nation." Justin later declared (albeit not verbatim) that there is no place for the state in the bathrooms of the nation. Scheer, meanwhile, voted against C-16 because he's a deplorable bigot who hates transgender people (another platform that worked in Trump's favor), while Jordan Peterson the lobster god of incels, who is advising Doug on gutting the Ontario sex-ed program, started his 15 minutes of infamy inventing conspiracy theories abuot "totalitarian threats to free speech" from what he later called Trudeau's "murderous equity doctrine." The fact that this depraved cult leader, poor man's marine biologist and amateur seafood chef gets traction as the "intellectual backbone" of the CPC hows how intellectually and morally bankrupt they really are.

Someone on Twitter shared a video of Kim Campbell talking about how she felt she was eviscerated and dragged through the mud not so much for the PCs' 1993 electoral disaster (for which Mulroney basically made her a sacrificial lamb), but for challenging the old boy network's status quo. The reason this person shared that video was to draw comparisons to why Trudeau is so hated for the same reason even though he's a Caucasian, heterosexual male, married with three kids. As I've often said, "misogyny against men is homophobia," and it's what the old-boy network in the Con media does best. Just like with Hillary Clinton. Paint the star candidate as vaguely "corrupt" or "crooked" when the real underlying animosity is far more visceral and personal. Michael Coren confirms this in his January interview with Wendy Mesley (aired prior to the Justin's Emails fiasco).

All I can say is that I for one am infinitely relieved that the recurring nightmare I was having, where he gets JFK'ed at Toronto Pride and Doug's party-van cops cover up the investigation, didn't come true. Never fear, the king of the North is here!

BTW, thought you should see the ratio on the ConStar's bullshit "Scheer is a moderate" tweet. After their asinine decision to put the definition of genocide up for an opinion poll on their front page, this doesn't surprise me. ConStar has gone full CNN. You never go full CNN.

I don't trust Ipsos polls anymore after finding out they were part of that oil-exec meeting and that Darrell Bricker collaborated on that Trudeau slam book with John Ivison. Or that they don't even prompt for the Green Party. Omitting the party that registers third in nearly all other polls is biased as fuck and produces inaccurate results. Nor do I trust Angus Reid or any of the other Internet opt-in panels. They're all in the same moneyball league, Canada's own version of Rasmussen rigging the system and cooking the books for the Cons. This numbers game is corrupt as fuck.

I saw Justin at a Pride parade in Montreal, and I thought the same thing. It takes guts to do what he does when so many crazy people are always threatening to kill him. But good for him, can you imagine Stephen Harper or Andrew Scheer doing that? Let's hope Canadians are smart enough to give him that strong mandate or we'll be very very sorry.

Pierre Trudeau stood up to the FLQ ("Just watch me") and to people throwing bottles at him during St. Jean-Baptiste Day. When Richard Nixon called him an asshole, his response was "I've been called worse things by better people." Justin Trudeau has deftly snake-charmed the likes of Donald Trump for 3 years to the point where it almost seems Trump has developed a crush on him, proving that you catch more flies with maple syrup than you do with vinegar. He goes to open town halls and Pride parades despite countless threats from white supremacists who want to assassinate him. He went to the Raptors celebration despite a shooting happening not far off in the distance. He also stood up to the members of racist gang La Meute who crashed a vigil for the victims of the Quebec City mosque shooting, and called them "morons with dog paws on their jackets."

Stephen Harper hid in a closet during the Parliament Hill shooting. He locked himself in a bathroom during a trade meeting with Brazil until he got his way on some petty issue about ceremonial toasts. He muzzled scientists who challenged his oil-at-all-costs gospel. He prorogued Parliament when a coalition of the opposition was about to take down his corrupt government. Andrew Scheer only hosts town halls with opt-in Con sycophants, and ran away from a reporter who asked about Rebel Media. I doubt he'll show up for the debates. Jason Kenney gave his MLAs earplugs so as not to have to listen to dissenting voices. Michelle Rempel blocks everyone on Twitter who calls her out on her bullshit. Doug Ford cancelled Canada Day because he had a sad about being booed at the Raptors parade.

CPC: Coward Party of Canada. Pass it on.

FYI: Lobster McLobsterface has a new Nazionalist Post hate screed that appropriates Pierre's memorable quote. If you read the article it's a lot of argle bargle and concern-trolling "think of the children" nonsense fluffed up to appear smart. I guess lobster pairs well with a side of word salad? He's no Dr. Spock. He's certainly not Mr. Spock either because he's highly illogical. He is still obsessed with his hatred of C-16, with the right-wing conspiracy theory that LGBTQ+ awareness amounts to pedophile grooming, and in particular with the deranged insinuation permeating the RWNJs that the most gay-friendly PM in decades is himself promoting the grooming of children. 50 years after PET's landmark statement, Peterson has declared that Gender politics has no place in the classrooms [of the nation]. What a bigoted bastard. He needs to STFU and get Pierre's words out of his damn mouth.

Not to flood the thread, but yet another example of all you need to know about who's voting Conservative and why:

After the speech, Scheer posed for more photos. The man with the braid, Mathieu Champagne, said he used to be a Liberal supporter and voted for Trudeau in 2015, the year he turned 18.

“I’ll be very honest, I was a lot younger, didn’t know much about politics, and he wanted to legalize pot. That’s why I voted that way,” Champagne said.

But things have changed a lot in four years, both for the Liberals and for Champagne, who says he has become increasingly troubled by “political correctness” and discussions about white privilege and gender fluidity.

It's not just the old folks set in their ways. It's the 4chan and Internet troll demographic of angry, young white men who just want license to let out their hate. Levant's manifesto written at Koch sleepaway camp is all about harnessing that negative energy online and directing it into mainstream politics. Marshall gave him the platform and now he's in charge of the Cons' campaign.

The "new" GOP, CPC, Brexit is being driven by the Twitler Youth.

There isn't one level headed, small 'l' liberal here. Most are over the top anti-free speech, close minded, with prejudged opinions with little fact backing the rhetoric ... you're fearfully describing YOURSELVES, not a couple cowards with big mouths ... basically, you all seem to be hypocrites.