Why Andrew Scheer's Climate Change Plan Is Such Sad Joke

When Andrew Scheer finally announced his "real plan to protect the environment" it was clear to me from the look on his face that he knew it was fraudulent.

And that only Cons and other furry creatures could believe him.

But since then the reviews have become even more brutal, even in the Con media.

With Andrew Coyne calling the "real plan" just a "prop" and others going even further.

With Gary Mason going as far as to call the Con plan a "sad joke."

Since its introduction last week, the federal Conservatives’ plan to fight the growing impact of climate change has been met with eye-rolling derision. The plan has been broadly portrayed as facile, vacuous and a cynical attempt to dupe a gullible public.

Their "plan” – and that word should always be placed in quotations – is a fraud. There is no commitment in it to meet the emissions targets set out in the 2016 Paris climate accord. There is an empty suggestion that the Conservative strategy gives Canada a better shot at meeting those objectives than the Liberal approach.

Mr. Scheer’s climate action plan looks like it could have been written by the Canadian Association of Petroleum Producers.

But as I and others have also pointed out, Andrew Scheer doesn't give a damn whether his plan is fraudulent or not... 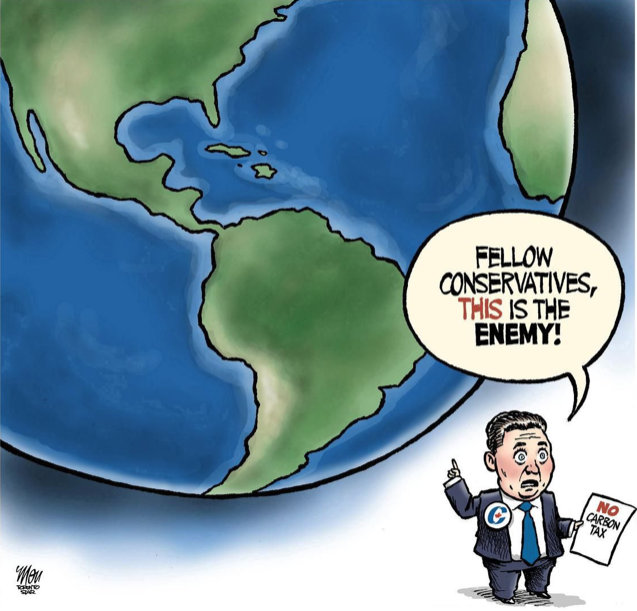 He's counting on the greed of Canadians to get away with doing nothing.

He will go out on the hustings this fall and say that the Tory plan saves people from surrendering their own dollars while letting industry do all the heavy lifting – and he’ll do it with a straight face. Or a dimpled smile.

What is undeniable though is there is irrevocable proof that the planet is in real trouble. That it isn’t a problem; it’s an emergency. Climate change is the greatest threat the world has faced since the rise of Nazism in the early part of the last century.

Given the importance of this issue, given the havoc that will be unleashed if nothing is done, how depressing it is to realize that this sham of a document is the best the Conservatives could do.

Which begs the question: If the Con media feels this way about Andrew Scheer, and if they truly believe that climate change is such a threat, why aren't they calling on him to RESIGN?

We don't need to depend on the Con media or anybody else to do what needs to be done.

We just have to organize, unite, and vote smartly.

And together we can wipe the grin off this grubby Con artist's face.

Do it, just do it, for our country and our planet...

You ask a good question Simon. If the MSM think Scheer is making a mockery out of such a serious subject as climate change, why don't they question Scheer's fitness to run for the highest office in the land ? Or does that only apply to Justin Trudeau?

They hate Trudeau more than they're disappointed in Scheer. They're counting on vote-splitting, brand recognition from the olds, and Trudeau derangement syndrome to carry them through by default. They know that there's no one credible to take his place, because if they asked that he step aside for someone more serious, they'd lose the lunatic base to Max and Harper's project dies.

There is literally no one left in the Deform Party of petrol-huffing western yahoos who could be a Patrick Brown opposite Trudeau -- which is to say, a Joe Clark opposite... uh, Trudeau. They need a westerner (even a carpet-bagger like Scheer who knew that Saskapatch would elect a turtle on a fence post as long as it was painted blue). The racists won't vote for Michael Chong. Lisa Raitt is another denialist and the abortion party won't vote for a woman anyway. Might as well just pull Ted Cruz out of Texas, then again there's no real need because Kenney is the de facto leader anyway.

But, I mean, really, who's left in this free-range insane asylum who could take Scheer's place at this point and offer up a viable alternative on the climate file (that the base doesn't believe in anyway)? Caroline Mulroney? Yeah, that opens up a real Pandora's popcorn box. A Dynasty soap opera, Canadian edition. Daughter of the guy who signed the acid rain treaty, running against the Prodigal Son, the King in the North. But tainted by her status as foot soldier for Mr. Buck-a-17% Approval. For shits and giggles, I'd love to see them do it. They won't, because they can't, so they're stuck with Dimples McDerpface whether they like it or not.

Interesting that Mason compared the potential destruction of climate change to that of Nazism. Scheer doesn't take that threat seriously either. In fact, he welcomes it as long as it gets him votes. "Because it's 1933."

Poor Andy no plan's "plan" has been exposed as a fraud as big as the man himself. Was he expecting, after all this time, that his "plan" would be embraced by all? That is what I'd call poor planning by no plan Andy. The man with a "plan" that has no legs on which to stand. What a ham.
To further ruin his week, the Libs have identified a good chunk of Andy's base as terrorists. Faith and her fellow white supremacists best beware that their actions will be monitored and dealt with as they should be. I'm sure Andy wasn't planning on that either.
JD

Aryan Andy's two-minute hate ads are back on Ruble Media, and the Cons have a new attack-ad meme that darkens Justin's skin tone and "accuses" him of wanting to "phase out the oil and gas industry." First off, they say that like it's a bad thing. Second, he bought them a pipeline at considerable political cost to save jobs and prepare for an inevitable transition that is subject to market forces and beyond his control. Third, and not necessarily in that order, just when you think the Cons and their propaganda mouthpieces had sunk to their lowest levels of abuse -- doxing Liberal supporters on social media, making fun of Justin's speech patterns, manufacturing fake scandals and fomenting bizarre conspiracy theories that he is a male version of Crooked Hillary who abuses women, sleeps with half the cabinet (per Rachel Curran's "speculation"), gives "handouts" to "terrorists," and "normalizes pedophilia" (per the billboards out in Alberta) -- now they send out pictures of him in blackface all over the Internet. Waiting for Pierre Poutine to call him a "tar baby."

But the media insists upon pretending that this party isn't racist or bigoted and doesn't condone hate and violence? Sure, Jan. Tell me again that the Neon Nazis who beat the crap out of Pride attendees in Hamilton, Ontario, or the rig pigs in Edmonton last winter carrying signs with vulgar messages about Margaret Trudeau and wearing shirts with threats to hang her son for "treason," were just having a flare-up of their economic anxiety disorder. The knee-jerk defensiveness of the garbage media and, now, radio silence on the MMIWG findings tells me all I need to know about their willingness to properly address the epidemic of racism in Canada. They'd rather focus on plastic forks and socks and invent corruption and retaliatory malice from cabinet shuffles, because to do otherwise would require them to take a good hard look at themselves.

The Conservative Party of Canada and its provincial offshoots, especially the particularly toxic Kenney Kudatah Kult in Alberta, are a hate group funded by Islamophobic U.S. billionaires and the globally destructive fossil fuel industry, that uses mainstream politics as a front for domestic terrorism and malicious cyber-warfare. They operate under the auspices of a shadowy organization setting itself up to be a right-wing version of the U.N. that is chaired by a former prime minister who employed racist rhetoric and dog-whistles over the course of his pathetic career, and who has a psychotic vendetta against his young successor who has made it a mission to stand up against hate. The whole lot of them, Harper in particular, should be banned from further participation in Canadian politics and jailed for fomenting unrest. "There's the door."