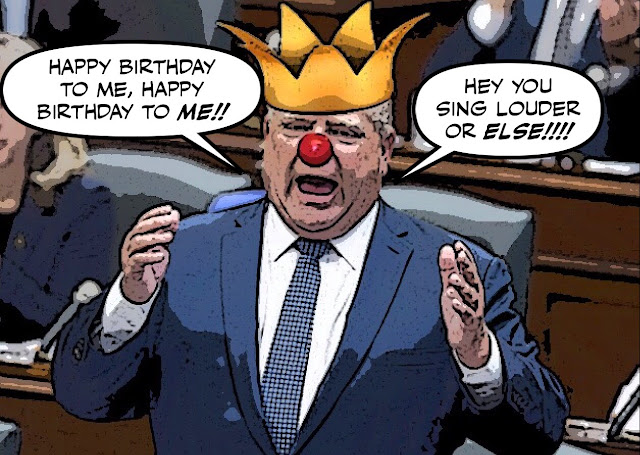 He is without a doubt the worst premier Ontario has ever known, a dumb Con beast who has disgraced himself over and over again.

But as he prepares to celebrate his first anniversary in power he is giving himself and his government a five-month paid vacation.

And although many believe he is doing that so he can hide under a rock during the federal election campaign, so as not to do even more damage to Andrew Scheer's Cons.

He's bragging about his accomplishments, as only he can.


One year ago, our government For The People was elected to clean up 15 years of Liberal waste and mismanagement.

We delivered real change for the people of Ontario.

When in fact he's not For The People... 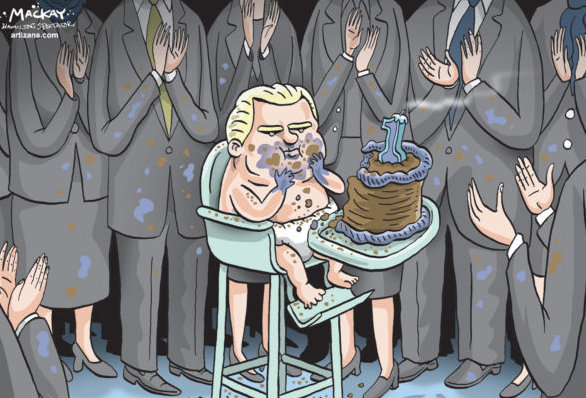 He's for the grubby rich, who like his shabby Con caucus cling to him like flies on stink. 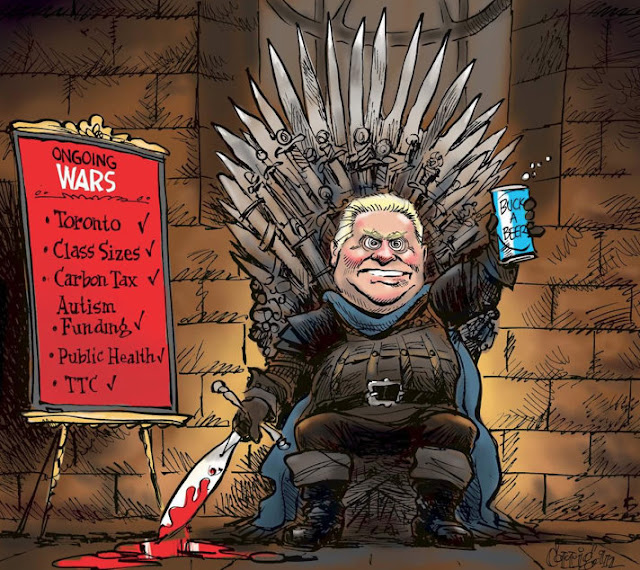 And it will take years to repair the damage he has done.

But the good news is that the resistance is rising. 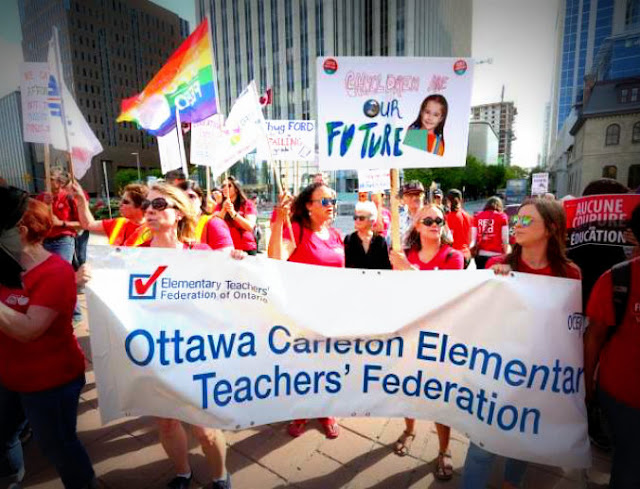 At a protest Friday against the Ontario government, Premier Doug Ford was called a bully, a clown, a mini-Trump and a trash bag.

And that was just in one sentence from a speaker at the suppertime protest in front of the courthouse on Elgin Street that attracted about 600 people upset with government cuts and changes to everything from education to health care and social services.

Rising up all over the province... 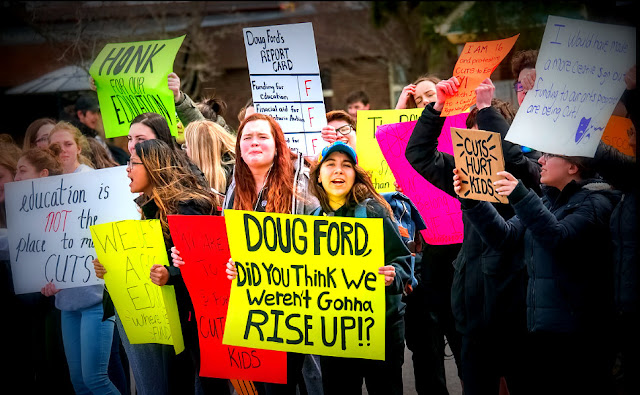 And a new poll shows that Ford is also dragging down Andrew Scheer.

A majority of Ontario voters are “less likely” to vote for Conservative Leader Andrew Scheer in the fall federal election due to Premier Doug Ford’s policies, a new poll suggests.

Among federal Conservative voters 21 per cent said they were less likely to vote for Scheer because of Ford’s policies. “Ford is a huge anchor on Scheer,” pollster John Corbett said Thursday.

And if Scheer thinks he can limit the damage by hiding Ford under a rock, I think he's going to be disappointed... 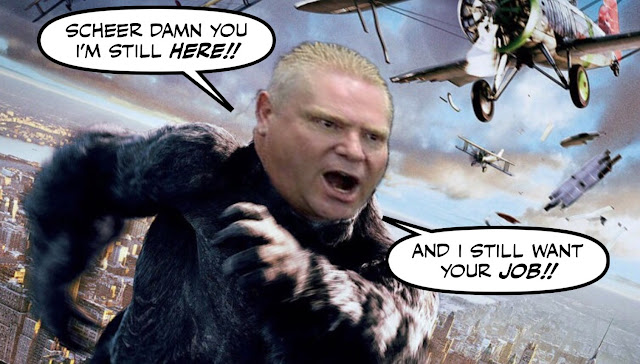 For the Fordzilla really does want Scheer's job.

And if he feels he's been marginalized or humiliated.

And we'll make sure he does.

He will take them all down with him...

At a protest Friday against the Ontario government, Premier Doug Ford was called a bully, a clown, a mini-Trump and a trash bag.

Oh, boo hoo, poor big baby, Da People aren't clapping for him like his barking seals in the Lege. They're calling him names in righteous anger, they're rising up in protest against the psychotic revenge he has taken upon Ontario, and they're mobilizing against the carbon copy that his good buddy Albert Speer wants to unleash upon all of Canada. Did his feelings get hurt? Too bad so sad. Justin Trudeau has been called everything from a terrorist to a sexual predator and far worse. He has faced countless threats of assassination, been the subject of baseless, perverse conspiracy theories, and had his name dragged through the mud by the tabloid hacks in the Ottawa/Toronto lying-press bubble. As if that wasn't bad enough, there's the vile and vulgar hatred spewed out against Liberal MPs, against Kathleen Wynne, and against Trudeau's own family, including even his children. And as if that wasn't bad enough, the 239-pound orange wrecking ball's policies alone have laid waste to Canada's powerhouse province, and wreaked havoc upon the environment, the economy, and the lives of millions of ordinary people, especially those most vulnerable. All for what? Cheap beer? A paragraph consisting of a few well-deserved insults pales in comparison to the damage that he has done.

The bile and destruction that this Reichstag dumpster fire of a hate group masquerading as a political party has unleashed is absolutely criminal. At the very least, I hope this vicious bully does turn out to be the weighted albatross that sinks the hopes of Aryan Andy and his deplorables. Fuck Thug Fraud, fuck Kudatah Kult Klanney, fuck Andrew Scheisskopf and fuck the fat cat Herrball Harper they all rode in on.

I'm hoping All female voters here in Canada will wake-up before October 21, 2019!

Still better than the vile Kathleen Wynne. Stop being such a sore loser and come on down to FordFest to enjoy a hot dog or a buck a beer. It's much more family friendly than some other events going on this month.

Yeah, really family-friendly to celebrate a man who sets a blowtorch to the school system, arrests little old ladies for protesting his slash-and-burn policies, and intimidates the parents of autistic children. And it's quite obvious what "other" events you consider "vile" just by your invective towards Kathleen Wynne. LGBTQ+ people have families too, you know. LGBTQ+ kids are also among those most vulnerable in Ford's mini-fiefdom. Your homophobia really reveals the character of what kind of mentality permeates the Ford/Scheer/Kenney/Harper/Trumpence "Straight Pride" hate cult. But tell me again that the Conservatives aren't bigots.

when you elect the non educated graduate of a family biz you get this. Last time it was a failed teacher golf pro, next time you have a religious mail room operator.

Ontario is ten thousands time better under Doug. That would mean we have a GDP thousands of time bigger than than whole world. Can no one in the media say, thats not just bullshit its exponential bullshit.

The gas plant debacle brought down the libs. On top of that the chum deal environment that gave us the Presto Card and METROLINX. I also think they spend way more than income. Ford does the same but she had a choice.

Yeah, the Liberals are real bad. They were so bad at spending money that the Ford government is spending $18,000,000 more per day with nothing to show for it. You idiots only care about the debt and budget when you're in opposition.

Hi Jackie...Fordzilla is without a doubt the most brutish Canadian leader I have ever known, and the fact that he is premier of a province as big as Ontario reflects badly on the people of that province. He has made them all look like dumb rednecks, and they will never live it down. But on the plus side, if Ford can drag down Scheer and his Cons I'll get a bobble head Dougie and worship it like a voodoo doll....😼

Hi Marmalade...it's not the women who have to wake up, it's the men. Canadian women support progressive parties by about ten points more than men. And with Scheer and his filthy Cons threatening abortion rights I'm sure that number will only grow...

Hi anon@7:46 AM....Kathleen Wynne was not vile. She may not have been the best politician in the workf but she never attacked the poor and the vulnerable like Doug Ford. And as much as I like hot dogs, the only thing worse than attending a redneck Ford Fest would be attending a Klan picnic....

Hi Frank...No you're the idiot. Anyone who thinks Ford is a leader has to have the IQ of a plant. Thank goodness you're pushing eighty and will soon be pushing up the daisies...☠

Hi Steve....I used to think that nobody could embarrass this country more than Rob Ford, but Doug seems to be on his way to doing just that. He's a dumb beast, and as I've said before, the fact that so many voted for him tells you how low this country has fallen...

I was being sarcastic towards Anon. I know Ford is an idiot.