The Total Humiliation of the Con Clown Lisa Raitt 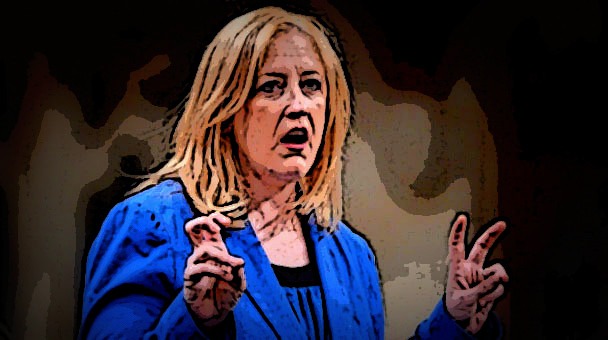 Lisa Raitt has made a fool of herself many times in the course of her long and sordid career.

With one of the most notorious examples being the time she was overheard telling an assistant that cancer is "sexy."

And now that Con clown has done it again, with this ridiculous tweet. 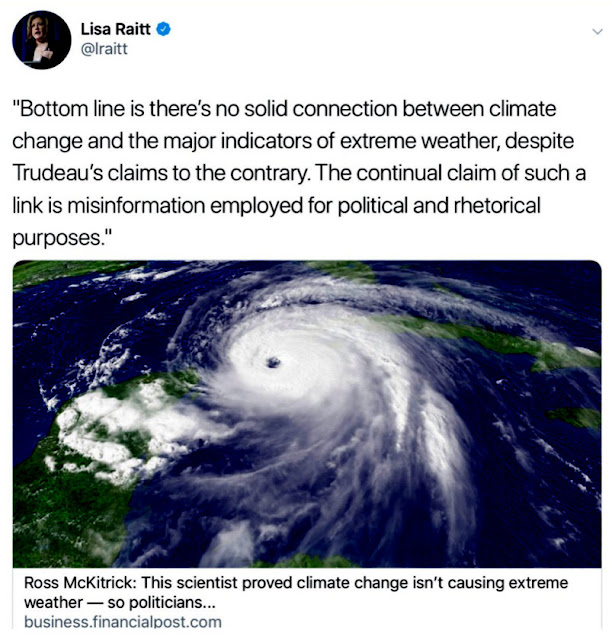 That referred her followers to an absurd article written by the notorious climate change denier and Fraser Institute fellow Ross McKitrick.

In her latest attempt to try to destroy Justin Trudeau.

Needless to say she soon came under attack from hordes of progressives...


Sorry Lisa Raitt, but when it comes to climate change I put my trust in the vast majority of actual scientists who believe it's a problem and a global threat and who have decades of data and research behind them, not the partisan hacks at the Fraser Institute. #cdnpoli
— Picard🏳️‍🌈🇨🇦 (@Picard_Resists) June 8, 2019


And even some real climate scientists...

Hi Lisa – I am a climate scientist. The article you quote above is incorrect and dangerously misleading. For the sake of our shared country, please have the courage and the integrity to update your understanding. Start here:
1/ https://t.co/1dJp0U6Ki6
2/ https://t.co/tx7yXKcHcv
— Katharine Hayhoe (@KHayhoe) June 8, 2019


Until at last Raitt could take no more and conceded defeat.


Well I’ve learned my lesson in tweeting anything about climate change. I’m going to be transparent & let you know I’m deleting the earlier tweets. I’m not the one to fight with on this because like most I believe that emissions cause climate change and we should reduce emissions
— Lisa Raitt (@lraitt) June 8, 2019


And was once again humiliated beyond recognition...

And all I can say is, climate change will be the death of the Cons.

And if she has any respect for herself, the Con clown Lisa Raitt should resign as soon as possible...

I hope Adam the kayaker humiliates her even further in October. 'Course, the bad faith Cons will wail that Trudeau's a fake feminist for running a guy in a woman's riding. I seem to recall Dr. King saying something about judging a person by the content of their character rather than their demographic identity. Or in Lisa's case, lack thereof.

Hey, at least Lisa was honest and made a retraction. Not perfect but infinitely better than Scheer-retro and his oily mongers. We are a way off from establishing a direct link between carbon dioxide emission levels and extreme weather. Its somewhat like baseball statistics and steroids. The effect is statistically significant but to say any particular home run that Bonds hit was the direct result of steroid use is a stretch. Same for extreme weather, increased carbon dioxide levels contributes to global warming which likely causes the event probability of extreme weather to go up but drawing a direct link to any particular event can become a huge credibility trap if they decrease or move elsewhere for a period of time. Con propaganda at its finest, take an extreme position, destroy the center and along with it any chance of progress.

On the same day that the Frontier Centre issued an apology to Dr. Mann. What timing.

McKittrick is an economist and Pielke is a political scientist. The foundations would have better spent their dark money on PR and advertising hacks.

Silly Lisa . Pielke talks about costs not weather. Trump pulled every dirty trick to deny help to Puerto Rico. So less money was spent than was needed to repair the damage. According to Pielke-think little damage was done there. Another economist who knows the price of everything and the value of nothing.

McKittrick makes good money writing this sort of drivel but , of value there is nothing . Is Lisa can read she knows this.

Hi Jackie....yes, I am also hoping that Adam in his kayak sinks that nasty Con garbage boat. Adam is a really decent person, while Raitt has become such an ugly Con partisan. I blame Scheer and Hamish Marshall for degrading her even further, but Raitt has only herself to blame for going along with them...

Hi RT....I will give Raitt some credit for deleting her absurd tweet, and for stating that she believes in climate change unlike so many other Cons. But quoting a well known climate change denier just to try to put down Trudeau is simply pathetic. She could have been better but now she's just as bad as the others....

Hi John...I think that Raitt was just so eager to win some brownie points from Scheer that she leaped without looking, and hadn't a clue what she was talking about. It's bad enough that those oil pimps can't control their desire to drown us in their tarry product, but denying what they're doing to the planet is absolutely criminal...

Hi rumleyfips...As I told John, I'm not sure Raitt knew what she was doing. She has become such a cheap partisan, that any chance to attack Trudeau is all she looks for. One day I'm sure she will regret how she behaved during the Scheer years, but she will have to live with that disgrace for the rest of her life...