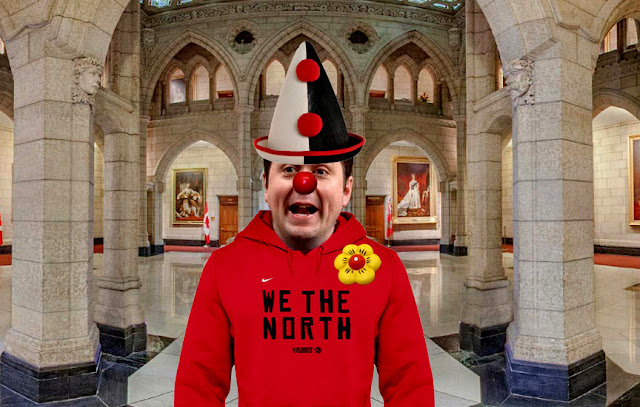 It's been an embarrassing week so far for Andrew Scheer. On Monday he skipped Question Period so he could pose for pictures of himself dressed in a Raptor's red hoodie.

So he could pretend to be a fan, bask in the glory if they won, and no doubt blame Trudeau if they lost.

But as we know they did lose, there was no fake glory.

And instead the desperate Schmearmonger had to deal with not ONE, not TWO, but THREE massive embarrassments in a row. 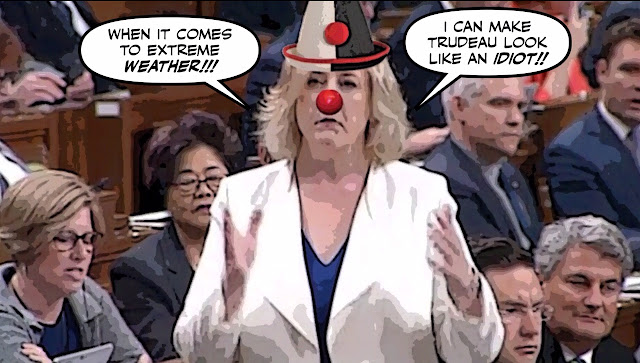 First there was the embarrassment caused by Lisa Raitt, when she tweeted her support for some story written by a notorious climate change denier... 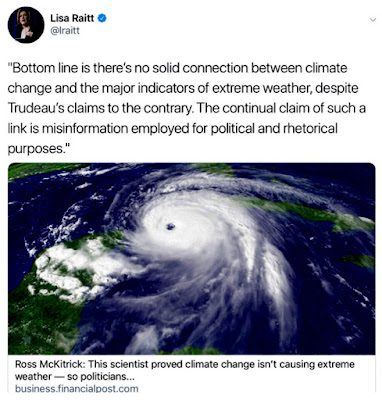 Only to delete them, and look like an idiot.

Leaving Scheer to dodge questions about climate change, and also look like an idiot.

Conservative Leader Andrew Scheer won’t say whether he thinks extreme weather events have anything to do with climate change and human activity.

When asked directly if Scheer believes extreme weather events have any connection to climate change or human activity, the Conservative leader’s office ducked the question and responded with an attack against the carbon tax.

Especially since he STILL doesn't have a climate change plan.

Then, as if that wasn't bad enough, there was the case of the Con Senator Denise "Batty" Batters acting batty. Again.

Which was so deeply disturbing it had the cowardly Scheer dodging reporters again, and running for cover... 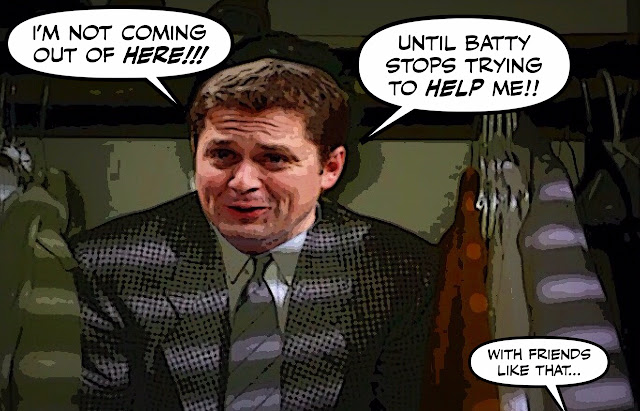 But then came the Big One, the embarrassment he couldn't get away from.

The story in L'Actualite where Carl Vallée, who worked for many years for Stephen Harper dropped this bombshell.

"Scheer, Marshall and most of the Con strategists come from the political school of Harper. They grew up with him, he showed them everything. In that sense, in terms of ideas, it's still the party of Harper..."

"Andrew Scheer rarely makes an important decision without consulting his old boss, as well as his former colleague Jason Kenney, now the prime minister of Alberta."

And turned Scheer, for a change, into a moving target for Justin Trudeau.

“Like Harper, he doesn’t think that we need to act to combat climate change. In fact, last week we learned that Andrew Scheer doesn’t take any important decisions without consulting Stephen Harper,” the prime minister said.

Andrew Scheer may be Stephen Harper with a smile, so, exactly as advertised,” Trudeau said, to laughter from his audience. “But he’s taking pages straight out of (Ontario Premier) Doug Ford’s playbook. 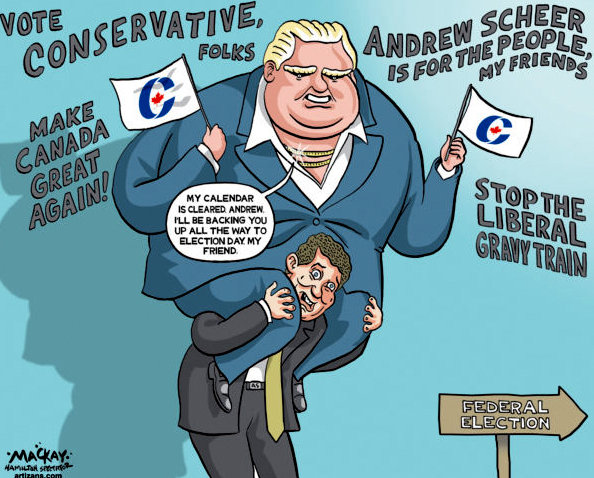 For the image of Scheer and Doug Ford joined at the hip is damaging enough.

But the image of Stephen Harper pulling Scheer's strings is even more devastating... 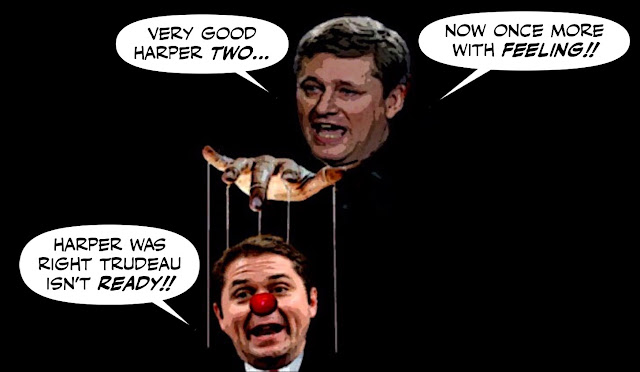 And it should be the never ending embarrassment that finishes that Con clown off.

For some Canadians may vote for Scheer.

But most will never vote for the return of the Harper regime...

Nanos has the Tru' Grits back within 3, and Frank Graves signals trouble for the Cons in Ontario. If you follow the account of former ONPC staffer Mike Gibbs on Twitter, he reported an anecdote that a friend told him: Con door-knockers even in rural Ontario are being shouted at and literally "hounded" -- by people's guard dogs! -- out the door and down the street. So there's a flicker of hope. I just hope the Trudeau derangement syndrome among some other Canadians, and the Con M$M's angry noise machine that's no doubt going to be dialed up to 11, isn't severe enough to drown out the far, far greater threat.

There is so much irrational hatred for Justin. I would even go so far as to say it might even be worse than Hillary derangement syndrome. It really belies the Disneyfied myth of polite and cutesy Canada, and maybe that's part of the anger directed towards him. The preexisting Trudeau derangement syndrome that has now unleashed a bevy of Adam Sandler stammering "Waterboy" memes by the most juvenile, ableist Cons in the social media vomitorium, plus the reactions to the MMIWG inquiry -- even by the ostensibly liberal Toronto Star, which had the damn nerve to put the definition of genocide up for a goddamn opinion poll -- have revealed some ugly truths that Canadians are "just not ready" to accept.

One way or another, this is going to be the fight of Justin's life. And all I can say is I'm proud of him for going into it head-first. He's more than ready. He's up for the challenge. But he's also challenging everyone else to do the right thing.

It looks like the Cons are falling apart, and it's happening just at the right time. Ford can hide but the damage has been done. It will be easy for the Liberals to point at him and say, if you want more of the same vote for Scheer, and as a bonus get Harper and Kenney as well.

They just got ratioed for an idiotic Trudeau-bashing video where some twee Con coed candidate dumps a box of water on her head.

The worst part of it is that it's yet another example of them mocking the disabled. First Rempelthinskin makes fun of Justin's speech impediment and now the Cons are parodying the Ice Bucket Challenge, which has raised billions in support of ALS research. We know already how Ford and his goons have terrorized autistic children and their families. I also recall their deplorable delaying tactics on the national anthem bill and their dismissive cruelty toward Mauril Bélanger. Bullying of the disabled is a straight-up Nazi tactic: Action T4 was the initial "testing ground" for the Holocaust. They are disgustingly and willfully ignorant of history. What's next, kicking someone in a wheelchair down the stairs to mock Trudeau carrying the guy down a stalled escalator?

No plan Andy's lead is waning and with the help of no clue Lisa, alcoholic Rempel making fun of JT and the shadowy sack of shit, Harper, directing these losers, it's no wonder Scheer's lead that was only made possible by the disgruntled witches and the Con MSM has begun to fade.
JT isn't perfect but in comparison to these Con douchebags, he most certainly is.
JD

JT could turn a box of water into a box of wine and Michelle the evangelical souse would still hate him. Maybe JT can't walk on water but I look forward to seeing Andy the Antichrist and the rest of Hellcat Harper's unholy disciples sink into their own godless swamp.

They are certainly clowns but more the evil sinister type willing to use the complete range of negative emotions to engage and thrill their base and the unsuspecting. A brief review of the official Con website indicates that in addition to Trudeau bashing and rebel style "sign if you agree" sucker profiling it now includes their plans for a better Trudeau free Canada. Nothing about the most important issues, just those that can be exaggerated and emotionally exploited for political gain. No health/pharma care, no child poverty, no opioid crisis, no climate plan, no education/jobs for a competitive future, no infrastructure renewal but lots of hype on jail,sex offenders, gangs, human traffickers as if justice system failures were a Trudeau mandated crisis rather than the exception to a good system. Then there is the bizarre argument that the government push to implement an unbiased infrastructure approval process (including pipelines) was unleashing unbridled separatist sentiment and only ramming through a cross Canada pipeline corridor can unify the country. The crazy logic is inescapable... extracting twice as much oil compared to a dozen years ago with less revenue and employment but with increased pollution, legacy costs and interprovincial division is going to save the country. Then there are the border crossing refugees that cannot apply for refugee status while in the US because of the safe third country agreement. Scheer is going to close that top top priority loophole but fails to mention how ... possibly by pulling a Trump - Mexico gambit by threatening US trade sanctions until the US commits to keeping them. The one thing for sure is that desperate people will find a way in... likely through smugglers/human traffickers whom we will jail indefinitely at a cost of 150,000 per year instead of feeding the applicant families while their claims are evaluated. The organized smugglers won't get caught just the desperate but expendable intermediates trying to pay off their debt to the man. The list goes on but the Con clowns are far far worse than funny incompetent buffoons.

Congratulations to the Raptors. Oui, le Nord! If Justin Trudeau gets to enjoy nothing else amid all this Kudatah madness and undeserved battering of his reputation, he can at least celebrate the NBA championship visiting Rideau Hall instead of the Trump White House. Trudeau will get to party with Kawhi and Drake, while Scheer has nothing else but rehashing the past with Gretzky. A Con is a Con; athletic stats notwithstanding, that's not exactly what I'd call a "great one" in any decent person's book. History will look fondly upon those who fought fairly versus those who worked the refs.

HI Jackie.
Re: "If Justin Trudeau gets to enjoy nothing else..."
AND don't forget he gets to enjoy Nancy Pelosi's gift basket: Ghirardelli chocolate from San Francisco, California wine and a selection of almonds and walnuts.
Mmmmm. I can relate to it.

Guess what? I got a phone call--from the Scheer campaign.
Presumably you all will be getting yours.
(But maybe, you need a landline?)
I feel a little sorry for the canvasser. I cut him off.
I asked, "Who's calling?" and as soon as he said who he was and what it was, and very politely...he didn't get past the name Scheer
when I said "No thank you. No, thanks." and hung up.
I think he got the message loud and clear.

Hi Jackie...Yes, the irrational hatred for Justin Trudeau is truly disturbing. One day it will merit a special chapter in the journals of psychiatry. For it makes no sense with the economy stronger than it has been for over forty years, and Trudeau so obviously a better person than the creepy Andrew Scheer. I still believe that reason will prevail, but it will be the fight of our lives...

Hi anon@12:48...I think you're right. There are signs the Liberals arevrecovering from the damage caused by the fake SNC scandal. I eexpect this process to gather strength over the summer, and when Canadians realize the danger of a Scheer government, Trudeau and his Liberals should prevail...

Hi JD....All those grotesque Con stunts will only convince more Canadians that Scheer and his grotesque gang are unfit to govern. Justin Trudeau is infinitely better than Scheer, there is no comparison, and hopefully even the dumbest Canadians will realize that before it's too late...

Hi RT....I portray Cons as clowns as a measure of my contempt for those third-rate traitors and fascists. But I don't underestimate the danger they pose to this country and its values. So I will have to change my style. It won't be easy as I have always enjoyed laughing at bullies, but I think it's time to start imagining what a Con future might look like. A lot of Canadians seem to be sleepwalking to disaster and we all need to help give them a very rude awakening...

Hi Steve...People like the Cons who disregard science will if they ever regain power lead this country to absolute disaster. We are at a critical point in human history, and if Canadians don't vote wisely they will regret it forever...

Hi brawnfire....I am very impressed with your restraint. I was raised to be a polite person, but if I ever got a call from the Cons I think I might go berserk. 😡