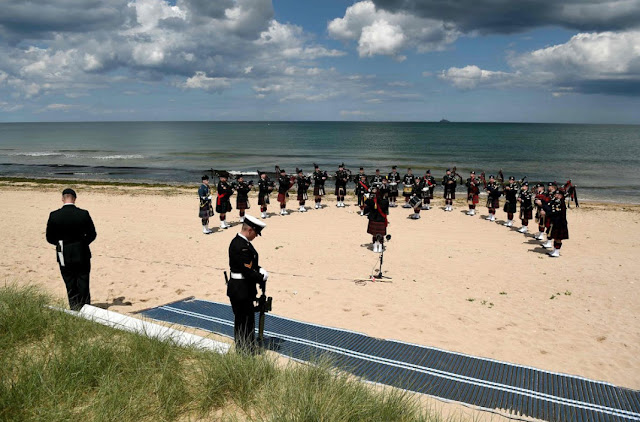 Today is a very special day in the history of Canada. The 75th anniversary of D-Day, when 14,000 of our soldiers joined the assault on Hitler's Atlantic wall.

Storming the beaches of Normandy to strike a massive blow for freedom.

Or in the immortal words of Toby Barrett, a Con member of the Ontario legislature, to pave the way for Doug Ford to sell beer in corner stores. 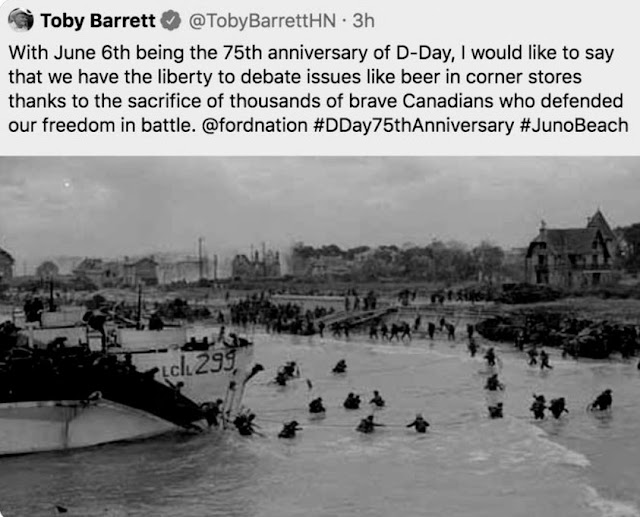 But he's STILL not sorry.

When he works for Doug Ford, the dumbest and most bestial premier in modern Canadian history.

A man who is waging war on the poorest and most vulnerable people in Ontario, and is now preparing to dismantle the province's medicare system.

But who like Toby Barrett and his other trained seals, believes it's always time to party.

FORD FEST is back – bigger and better than ever!

Join the Ford family and our all-star PC team for a BBQ. It's going to be a great evening filled with entertainment and lots of #FordFest fun!


And who has just announced that his government is going to take an extra-long summer break.

Ontario's legislature is set to take an extra-long summer break, with politicians not returning until after the federal election. The Progressive Conservative government is planning to move a motion Thursday to adjourn until Oct. 28.

So Ford can campaign full time for Andrew Scheer and his Cons.

Or as I have suggested, so Scheer can try to hide Fraud's government and limit the damage he is doing to the Con cause... 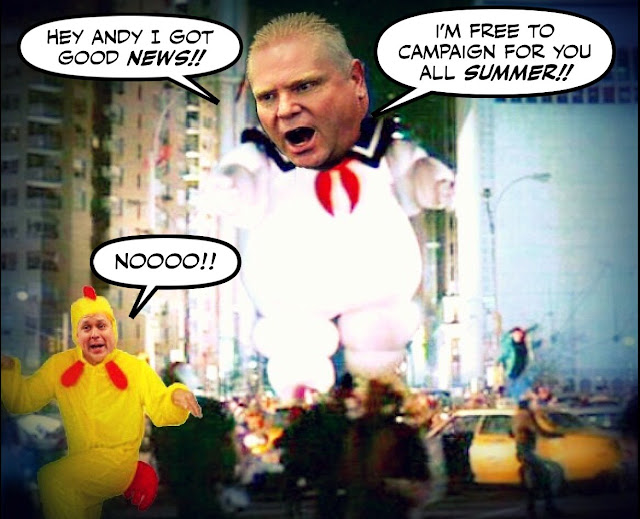 For it is the same conspiracy, and all the Cons are working together to try to change Canada beyond recognition.

And all I can say is good luck with that one.

For our soldiers didn't fight and die fighting the Nazis, only to have another group of right-wing extremists take over this country.

And we will make sure that doesn't happen, inspired by a real Canadian leader who was there on Juno Beach this morning. 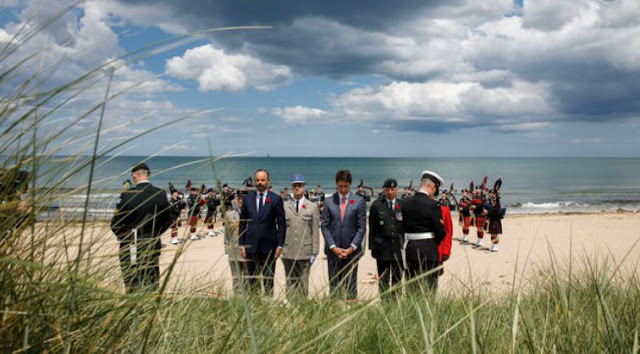 Unlike Andrew Scheer who was too "busy" to honour the sacrifice of so many brave Canadians.

Down with the filthy Cons. Long live our Canadian values.

And may our Canadian heroes inspire us forever... 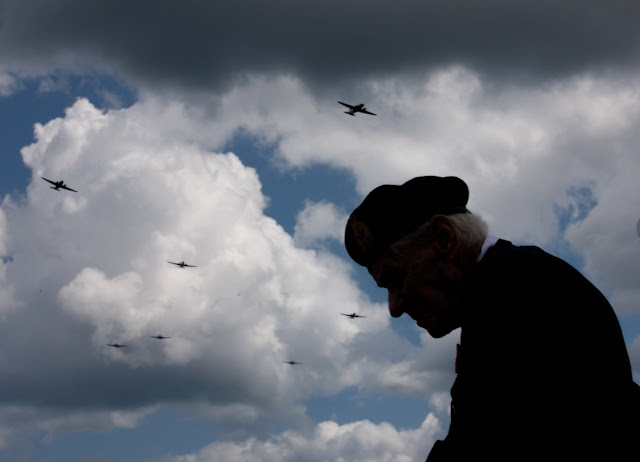 Figures that on D-Day (Donald's Day, ugh), a neo-fascist dope like Thug employs some goon who tweets merrily about a Buck-a-Beer Hall Putsch. Did you happen to notice the op-ed from Chantal I posted on the previous baby blimp article? I really hope that the obnoxious booze hound is what ultimately causes Aryan Andy to snatch defeat from the jaws of German victory.

Keep calm and block the Cons.

OT but hey Simon did you see this?

I wish I lived in Canada, and could show this to Justin Trudeau personally at a fundraiser event or town hall, so that he could make note of it and tell the world. It was a coup, and daddy and the old-guard backroom boys were behind the whole thing. Someone in that thread said Paul Martin recommended JWR. Knowing all about the Chretien rivalry (and Chretien being listed as a "Trudeau loyalist" while Bill Wilson is a longtime rival) it all makes sense now.

"Unlike Andrew Scheer who was too "busy" to honour the sacrifice of so many brave Canadians."

Let's not kid ourselves here. Scheer didn't go because of his demented hatred of JT and the thought of him giving speeches, laying wreaths, etc. while Schmeer played second fiddle. It was all too much for him to bear. I hope his "family commitments" were worth it. "Family commitments" that were made possible by the sacrifices of these brave people so many years ago.
It's an appalling excuse of a leader of the opposition that would let their own bitter, spite fueled rage get in the way of honoring our vets. Lest we forget Canada. Let's ensure that when Duhg's vacation ends, Scheer's will commence.
JD

Our forefathers would be rolling in their graves if they could see what downtown Toronto looks like now. All those lives lost so we can get replaced by foreigners anyhow.

I'm proud to be a Quebecer, many of us wanted nothing to do with that war.

The Con propaganda machine thrives in a virtual space where selected problems congruent with their ideology can be amplified and solutions simplified. This in turn portrays the opposition as uncaring elitists who are both incompetent and uncaring in recognizing the insufferable problems of the average person and easy to do solutions. Dougie operates in the real world and amply displays what happens when the virtual and real Con worlds collide. Not a good thing for the propaganda machine so the solution is to put his government on ice until after the election. Doug is a simplistic thug so it is hard to imagine Scheer and his strategists convincing him that he is doing their cause more harm than good. Its also unlikely he had an epiphany or rationally decided to wait and see the effects of his wondrous changes to date so that leaves the likely probability that someone cashed in a marker. A bold move in Canadian politics but run of mill in the US and elsewhere. Who ever they are have the power to coordinate provincial and federal election propaganda as well as government legislative schedules, its an old Harper strategy but no small feat when supposedly on the outside looking in. Why do I have the feeling that the Liberals are bringing a pea shooter to a high stakes gun fight!

Why do I have the feeling that the Liberals are bringing a pea shooter to a high stakes gun fight!

I feel the same way, RT. I don't think Trudeau's metaphor of politics as boxing is adequate: it's more like Trump's WWE where the outcome is decided in the back rooms and the slobbering crowd decides who's a heel and who's a face, and those identifications can change at any given moment. In professional wrestling John Cena is roundly despised and booed loudly by the fans because he has a clause in his contract saying he will never play a heel role, and the crowd hates a squeaky-clean Marine. But he doesn't feel it sets a good example for the cancer-stricken kids he has visited by the thousands over his years as a Make-a-Wish volunteer. Trudeau is John Cena and he's being taken on in a handicap match, after already having been betrayed by a cadre of female wrestlers who sided with the other team and worked (or knocked out) the refs. Behind all of this is Vince Harper McMahon pulling the strings and watching the good guy get tricked and clobbered from all sides, as he and his team of heels rake in the cash.

As Neil Macdonald says it's bullshit theater. In wrestling it's called kayfabe. For all the homophobic dogwhistling the Cons make about Trudeau being a drama teacher it seems they're the ones who enjoy playing the Method role of villainous louts. When I saw that photo of Trudeau and Obama over the weekend I wanted to cry, and I actually did, because all it did was remind me that there's a reason why Fred Rogers and LeVar Burton never stood for political office. I don't know what will have to be done to ensure the nice guys don't finish last this time around, but God help you, Canada, you damn well better get out and do it.

Wrong. Our forefathers would be rolling in their graves if they saw the kind of institutionalized, state-sanctioned bigotry they fought against in that war rearing its ugly head yet again. Cheeto Mussolini and Albert Speer operating in tandem in North America goes against everything we thought we defeated in 1945. Honor your Quebec heritage all you want, but know that it doesn't make you superior to anyone else. The Raptors crowd is diverse and proud.

PET wanted nothing to do with that war. Why, the truth is out there, but no one ever wants to look at it.