The Glory of the Raptors and the Hypocritical Cons 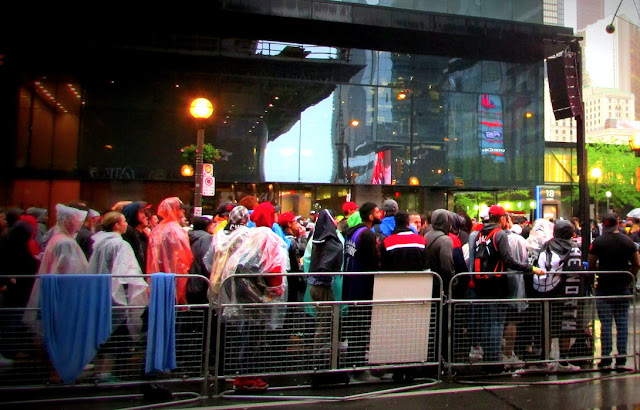 It was a neighbourhood party that began in a subdued manner, with Raptor's fans lining up for hours in the pouring rain to get into Jurassic Park.

But it ended with me needing a full day to recover.

For when the final buzzer sounded, and the Raptors were the new reigning champions, a massive roar rocked the neighbourhood.

And the place exploded.


It was an amazing sight.

And for one marvellous moment the country was united.

With Raptor parties all over the country. Even Montreal... 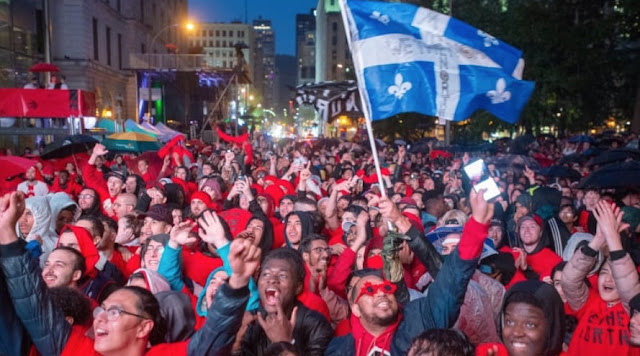 Which to my knowledge has never before cheered for a Toronto team.

But nobody should be surprised, because as I've said before, what impresses me the most about many of the young Raptor fans is their incredible diversity... 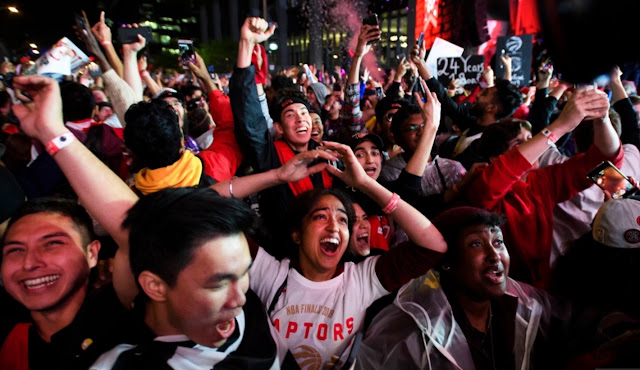 And the way they all get along together, and cheer wildly but peacefully for a team that is as diverse or as global as them.

The new kings of NBA basketball are the first outside the U.S. to wear the crown. And they come from all corners of the globe.

Team President Masai Ujiri was born in England and raised in Nigeria. Serge Ibaka is from the Congo. Gasol will play again for his native Spain this summer in the FIBA World Cup. Coach Nick Nurse won his first championship in Britain, where reserve OG Anunoby comes from. Even the team’s superfan, Nav Bhatia, comes from India.

Which at a time when racism and bigotry are spreading like a plague all over the world, is something to celebrate.

This is the coolest. Toronto I love you… #WeTheNorth pic.twitter.com/YkbGsHEGmA
— Calum Shanlin (@calumshanlin) June 14, 2019

Minorities are now a majority in Toronto. In a few decades, the country itself will be majority brown. And on the streets Thursday night we saw the future of the West. No matter what the populists say, the multicultural mixing of peoples will continue, as will the art and beauty and basketball championships that come from this diversity. Beyond the trophy, that’s the greatest victory of all.

And of course, all of the above is why I hate bigots like Faith Goldy... 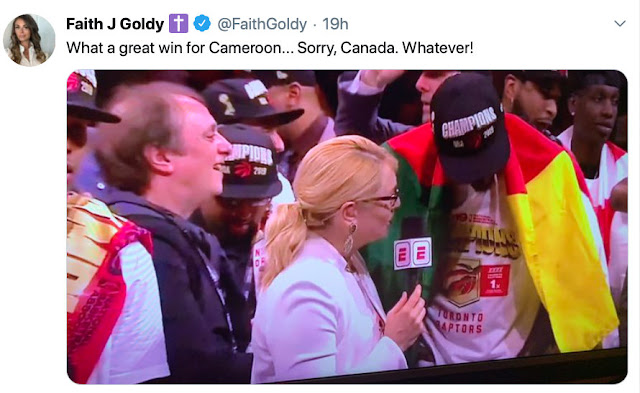 Who would turn something beautiful into something as ugly as she is.

As would her good buddy Andrew Scheer who is both bigoted and hypocritical.

And would pose as a Raptor fan, while stirring up racism at the border... 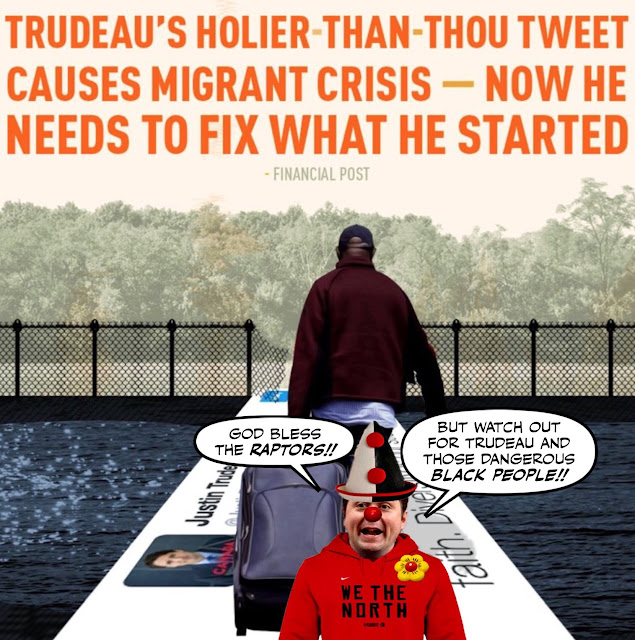 And let's not forget Doug Ford who was also posing as a Raptor fan today...


Even though as Daniel Dale has reminded us with this blast from the past... 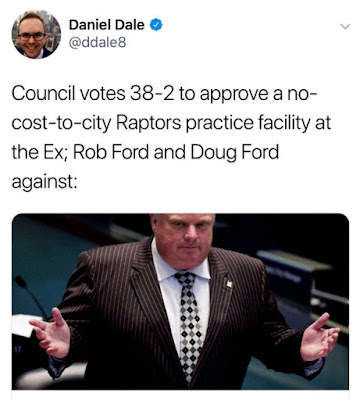 He is also a ghastly hypocrite, and no friend of the team.

But at least the Fordzilla won't be going to the parade.

Premier Doug Ford won’t be marching in Monday’s Raptors parade, saying he’s enjoyed watching how the team has brought people together and doesn’t want the divisiveness of politics to interfere with the celebrations.

Claiming he doesn't want to be "divisive."

When in fact the real reason is that if he dared show his face, he'd be booed loudly from the beginning to the end of the parade.

Which tells me at least one thing.

Time is leaving the Cons behind.

The future belongs to us. 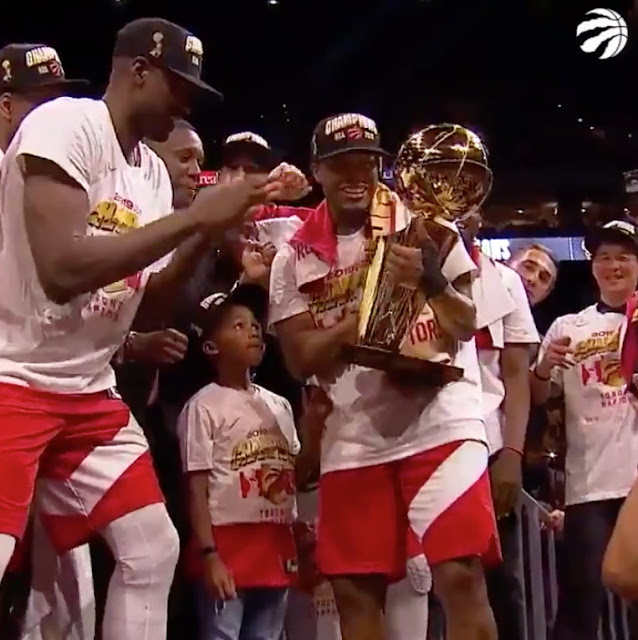 And the Raptors and their fans are the champions of the New Canada.

And the champions of the world...

I hope Trudeau takes the Ottawa mayor's offer up and extends them an invite, regardless of what Thug has to say. He could use a little bit of R&R considering what he's already been through and what he's got up ahead. The Kudatah Kon Klan will cry "partisan photo-op," but who gives a shit. FFS, they've tortured him enough. Let him have some fun.

At least we know they probably won't go visit the Man in the White Castle. Who needs stale hamberdlers when you've got donairs and poutine?

OT but, anybody happen to know if I'd cause trouble as an American, if I sent Justin a Happy Father's Day from the LPC website?

It asks for a Canadian postal code and I'm obviously not from Canada, but it won't accept my US ZIP code and I don't want to get him in trouble "foreign collusion" wise for putting in a fake A1A 1A1. I tried the Santa Claus one but it wouldn't take.

I just want to send genuine well wishes is all. I feel like he needs to know that there are people who still care about him. Perhaps I should send an email directly asking that my name be added to the card, and explain that I couldn't fill out the contact form?

Use this one and add that a Canadian friend allowed you to use their postal code, Jackie. K8A4J6
I doubt you'd be extradited over it.
JD

Thanks JD. Here's what I wrote:

Happy Father's Day from America, Prime Minister Trudeau! (A Canadian friend lent me their postal code to use, because I'm not from Canada but still wanted to send well wishes.)

I just want to say, ignore the haters and the bullies -- you are an inspiring and compassionate leader, and I truly believe your father Pierre would be immensely proud of you were he alive today.

We in the 'States truly love you and your family, and wish we could have someone like you as "head of household" here. All the best from the USA.

It takes you to an optional donation page after you're done signing, and of course I can't send USD because THAT would be a big problem. But I feel like I'm part of history now. I feel like I did my part to cheer him up. :)

"In a few decades, the country itself will be majority brown".

I tried the Santa Claus one but it wouldn't take.


Must be some control on it. It is a perfectly valid Postal Code but people may have been abusing it. Try something like N5W 1E6. Might work.

Oops see someone from Eastern Ont has already replied.

Toronto is a third world dumping ground. Hopefully Scotland is colonized first, so you have no where to run when Canada turns into South Africa/Zimbabwe in the upcoming decades.

Hi Jackie....I think Justin Trudeau should definitely invite the Raptors to Ottawa. I saw a picture of him watching the final game, sitting on a couch with two children and the family dog. So I'm sure he would enjoy it too...

Hi Jackie...nice message. When the Cons are defeated, and the Trump regime goes down in flames, Canadians and Americans will celebrate together and our friendship will be stronger than ever...

Hi anon....you Absurd Nazis really are the limit. What your Fuhrer did was genocide, people of all races and backgrounds living peacefully together is a good thing not a bad one. Idiot...

Hi anon...Not you again. What has got into you, is today Hitler's birthday. But let me just straighten you out before you make an even greater foo out of yourself. First of all Toronto is not a "third world dumping ground," I's a marvellously diverse city, and an example to the rest of the world. And secondly, Scotland may be a very white country, but it welcomes people from all over the world, and it has very strict laws to deal with racists like you. And if the law doesn't get you, the people will, and we're not gentle...

Speaking of PET: The Probe & Fail isn't even hiding their malicious intent anymore.

Same rich man's Con rag that used "anonymous sources" to break the SNC Stupid Nothingburger Controversy that unfairly damaged Justin's reputation and turned him into "Crooked Hillary" male edition. Now they've gone all-in with conspiracy theories about Justin's dad... the day before Father's Day. In an election year. That would have marked his centennial.

The real conspiracy here is the Con media's orchestrated hit job on not just PMJT but the ENTIRE TRUDEAU FAMILY. What's next, "anonymous sources" dishing dirt about Margaret's hospitalization? How the fuck is this even legal? Is Kinsella behind this or is Harper at it again? Or both? Is the IDU a client of the Daisy Group?

I have zero respect for Trump, but I wish Trudeau adopted his bully tactic of intimidating the press into fondling him lest they face "consequences." This is all-out informational warfare practiced by the dirtiest tricksters in the world. Canada's first post-truth election, because it's 2016. Maple Russia.

Faith Goldy with her cross and bible is another racist fake "Christian" who would walk on the other side of the street from the historical Jesus.

With a birth rate of 1.5 per couple it does not take a genius to figure out that pure white Canada is on the road to extinction. We can fight it all the way until a tipping point / Zimbabwe moment occurs or we can transition into a multicultural society that shares a common beneficial vision. Then again accurately predicting the future based on current trends is impossible especially with rapidly evolving technology. Perhaps through cloning and access to alternative universes/isolated spacial locations those that wish will be able to live in a self admiring universe along with a billion Scheer clones while others may choose to continue to evolve as individuals in a multicultural universe/big cities. We can either surf and shape the future wave for everyone's benefit or we can wail on about white genocide until it becomes a reality. The choice is ours but living in an isolated country with a billion Scheer clones is not my idea of a great future.