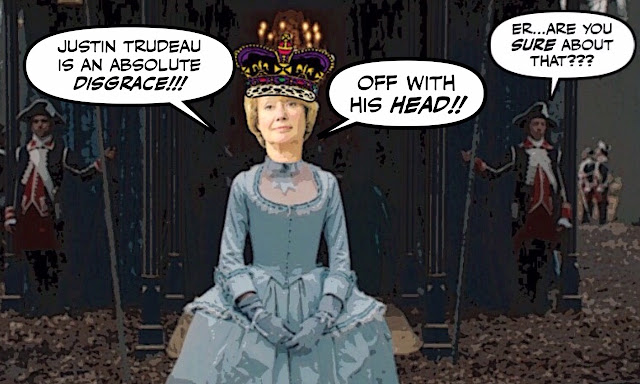 I can't remember why I started portraying her that way, but it was probably because of her snooty approach to everything.

But at any rate, I'm happy to report that our Marie Wente will keep her head.

But she is losing her job. 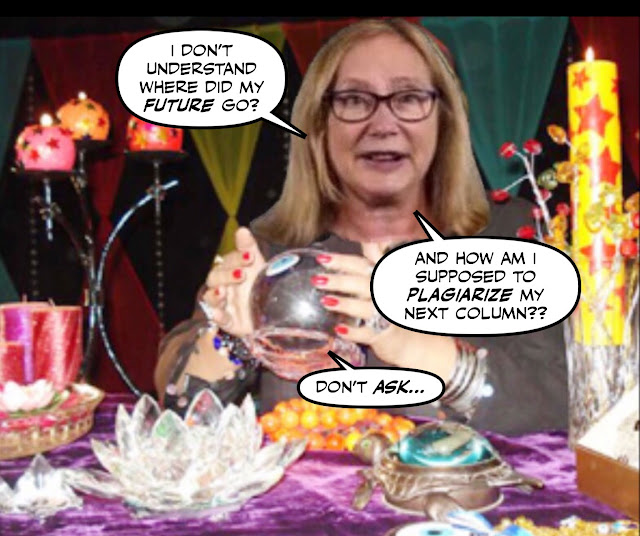 Or is being bought off.

Margaret Wente has accepted a voluntary buyout and will be leaving the Globe and Mail at the end of August, she confirmed on Monday.

“I’ve had a wonderful run at the Globe–33 years at the paper, and almost 20 years writing my column. I’ve been blessed with great colleagues and fantastic readers,” she told J-Source in an email.

And all I can say is thank you Great Polar Bear God of the Great White North for having mercy on us, at last.

Twenty years of Wente columns, twenty long years of cynical Con clickbait, is more punishment than any reasonably decent Canadian should be expected to endure.

Since her column started appearing in the paper nearly 20 years ago, she has weathered accusations of signal-boosting racist pseudoscience, downplaying student mental health crises, dismissing rape culture, and plagiarism.

Especially since for the plagiarism alone, she should have been fired long ago.

For it was a long fall from grace.

From managing editor of the Globe to Our Lady of the Clickbait... 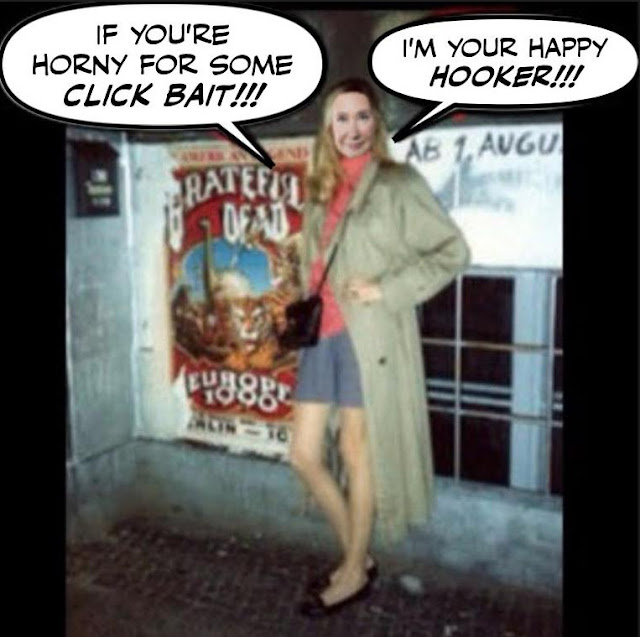 To cheerleader for Jason Kenney.... 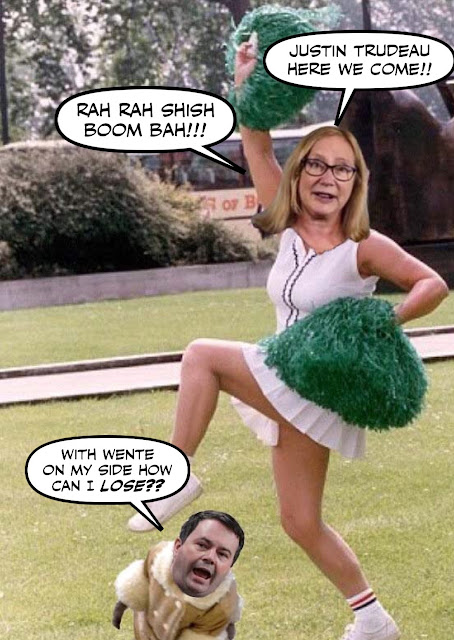 And the scourge of Justin Trudeau.

There were so many low moments I couldn't decide which one was the lowest.

Although a column, where she attacked Trudeau and suggested that legalizing marijuana will have pot heads erupting like mushrooms or zombies, will always stick in my mind.

But only because of the headline and the first paragraph. 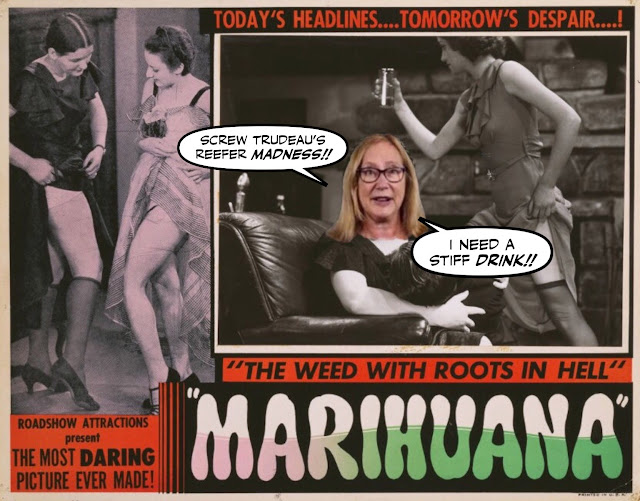 I'm not overly invested in the marijuana debate. My friends and I all smoked pot when we were young, but hardly any of us bother any more. In my circle, the drugs of choice are martinis and Chardonnay. Frankly, we consider stoners déclassé.

Which when I stopped laughing made me realize how hard Wente must have worked to try to put her finger on the pulse of the rabble.

As well as helping me to understand why she reached for the words of others, to try to explain what she couldn't explain, because she was so out of it.

And of course completely justified my decision to compare her to Marie Antoinette so  many years ago.

I certainly won't miss you...

Too bad Fife the Knife isn't headed for the unemployment line, or that the Probe and Wail isn't shutting down altogether. I can't fucking believe the absolute hatred Canada's media has for Justin Trudeau. It's sickening, and it really does call back memories of how the NYT, CNN and others absolutely crucified Hillary Clinton over nothing while turning a blind eye to Donald Trump. Children in concentration camps and the wholesale selling-off of the country to the highest bidder were an acceptable price to pay for "access," ratings, subscriptions, and other perks? Good riddance to Mags, but shame on the rest of the activist journo scourge. The fourth estate really is a fifth column and the enemy of the people. The damage they've inflicted is unforgivable, and I hope karma bites them all where the sunny ways don't shine.

Still, wonderful news! She was also very silly. I remember one column stating that women working in offices should continue to wear blouses (hard to fit for some of us, for example with small shoulders and considerable busts) instead of t-shirts. The t-shirts women wear in corporate or professional environments are silk or other fine fabrics, not rock tour ones. In general people want more comfortatable clothes nowadays, and they look fine.

I wouldn't be surprised if she has shares in cannabis start-ups now; many other scaremongers do.

We are losing the copy and paste Queen? Oh dear.

Why she was not fired years ago for serial plagiarism, I just don't understand.

Perhaps she had some dirt on the owners?

OT but speaking of news. New Forum poll cited in the CNN Star has the Cons ahead by 5, 34-29. What's encouraging is that the Cons can't grow the base. But we also know that Forum always oversamples the Cons (they had them at 40 last Christmas well before the Trughazi debacle), so that tells me the results coming in from Nanos, Ekos, Abacus, and Mainstreet showing a virtually deadlocked race (albeit a frighteningly divided country -- Cons lead in the angry West while the TruGrits lead in Ontario and Quebec) are on point.

Vote splitting from the Dippers and Dizzy Lizzy's recycled paper party remains a threat (and she was photographed at a Pride event giving an enthusiastic hug to Lisa Raitt, who we know is friends with the Consellout couple and all were involved in boosting the two mean girls during the fake scandal, so I don't trust her at all). But hopefully we can turn this around over the summer and convince enough strategic voters to put the country and the bigger picture ahead of single-issue fixation and Trudeau derangement syndrome. Go knock doors.

Maybe Kenney hired her to rant and cut past and post in his 30 million $ war room taxpayer funded while the school system gets starved. Conservatives sure have their priorities — produce propaganda and destroy = incapable of ever creating or building anything. The party where all the miseries and losers go to seek revenge for their loser lives on good people trying to create a better world for all.

Hi Jackie....I have a long list of Con media types I'd like to see retiring, for nobody can deny that their behaviour during the fake scandal was abominable. But slowly but surely they are heading off, and I even detect signs that that their bosses are starting to realize that the money Big Oil is slipping them isn't worth it, if they keep losing readers...

Hi Lagatta...Wente's total lack of empathy offended me over and over again. But in the last couple of years what bothered me the most was the way she picked on transsexuals who as I'm sure you know are the most bullied members of the LGBT. I found that cheap and unforgivable, so I'm really glad she's leaving...

Hi Steve....I don't know if I agree with you. Both are way too Con friendly, The Postmedia papers in Alberta recently endorsed Kenney with front page ads just like they did for the Harperites during the last election. And the Sun is a Con propaganda outlet. So I'll still keep praying for the death of Postmedia. ☠

Hi jrkrideau...I don't understand why she wasn't fired either. I would have forgiven her for one screw up, but the fact that she kept reoffending was outrageous and unforgivable. Marie Antoinette Wente really did think she was above the rules that in her mind were made for commoners....

Hi lagatta....I doubt it. I think she got a better deal than others because she was once the managing editor of the Globe, and because her clickbait column was very popular. She knew how to rake in readers and that's all her bosses cared about...

Hi Jackie....I'm encouraged that the trend seems to be favouring the Liberals. The Cons have run out of scandals and without them they have nothing. As for the Greens they might one day be a vote splitting threat, but so far there is no tangible sign of that. The battle will be won neighbourhood by neighbourhood, and door by door, but it's still a battle I believe we are going to win...

Hi anon...yes, I think you summed up the state of the Cons quite well. They are the lowest of the lowest. But because we're better than them, and more than them, we are going to win...

Often murdered, even in supposedly progressive countries. Yes, she was truly hateful. And blamed the WTC terror attack on the left. Islamic fundamentalists, like their Christian, Jewish, Hindu and even Buddhist violent fundie bretheren, are anything but leftist!

She did an equally silly column against leggings. WTF! Unfortunately one needs a sub to read it.

We should save Ding, dong the witch is dead for another Margaret, but I should at least make some kind of toast - just water, too late for espresso, far too early for wine!