Stephen Harper and the War on Russia and Tom Mulcair 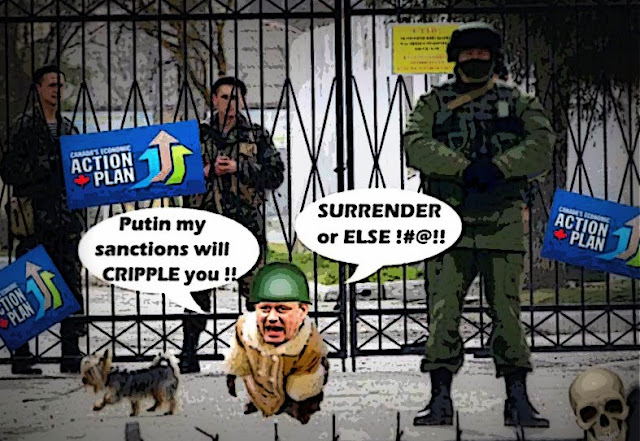 Well I suppose it was inevitable. He would pose as a Great Warrior Leader, and promote democracy in Ukraine, if not in Canada.

He would beat his tiny furry chest, send troops, planes, and ships to the region, and talk tough to the sinister dwarf Vladimir Putin.

Only to see his grand plan to bring Putin to his knees, with a barrage of "crippling sanctions" to be fired out of every orifice, exposed as a hollow farce.

Despite Canada's aggressive tone with Russia amid the ongoing crisis in Ukraine, it appears the federal government is not putting all of its money where its mouth is — at least, not when it comes to sanctions.

At least three Russian businessmen with close ties to President Vladimir Putin have curiously been excluded from Canada's sanctions list, calling into question the government's tough stance over Ukraine.

And so soon after declaring:

"We will not shape our foreign policy to commercial interests."

But then as I said at the beginning, it was inevitable.

It was always going to be harder to push Putin around, than it was to bully Tom Mulcair. 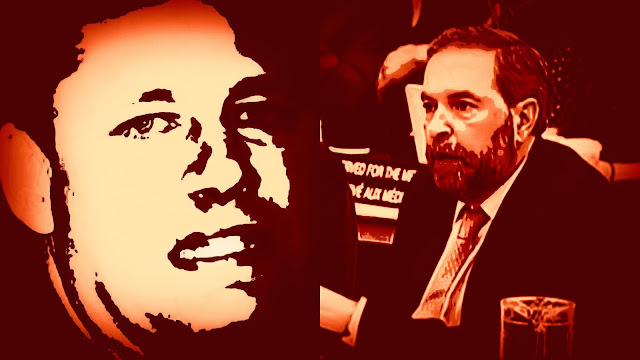 For Stephen Harper’s Conservatives, the temptation to use their majority to administer some of his own medicine to NDP leader Thomas Mulcair — the government’s chief torturer in the House of Commons — must have been irresistible.

Only a misguided spirit of retribution could have led the governing party to treat the housekeeping matter of the NDP’s decision to set up satellite parliamentary offices under the same roof as its Montreal and Toronto partisan operations as an issue worthy of a star chamber.

Because let's be absolutely clear, that's what that foul spectacle was: a grotesque and unprecedented abuse of Parliament, and a disgraceful attempt to bully the Leader of the Opposition.

And the only thing I can't figure out is why someone like Chantal Hébert should think that Mulcair should have treated his McCarthyite interrogators with due deference, instead of as he did, with the contempt they deserved. 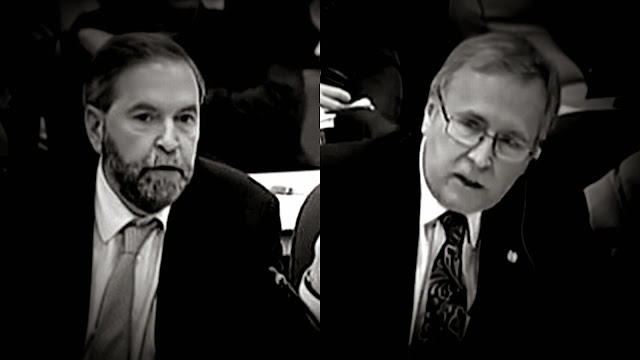 On Thursday morning, a half a dozen Conservative and Liberal MPs spent two hours grilling the leader of the official opposition as if he were a common thief and he, in return, treated them as so many common worms just waiting to be crushed under the heel of his cutting rhetoric.

With a performance that often bordered on patronizing arrogance, Mulcair is unlikely to have earned many new friends outside of the ranks of the converted.

Because the ONLY story here is that unprecedented abuse of parliament. The only way to deal with bullies is to pound them as hard as you can.

And I'm sure Mulcair made a lot of new friends with the way he crushed the Con worm and religious fanatic Stephen Woodworth under the heel of his cutting rhetoric.

Or his quotable quotes. 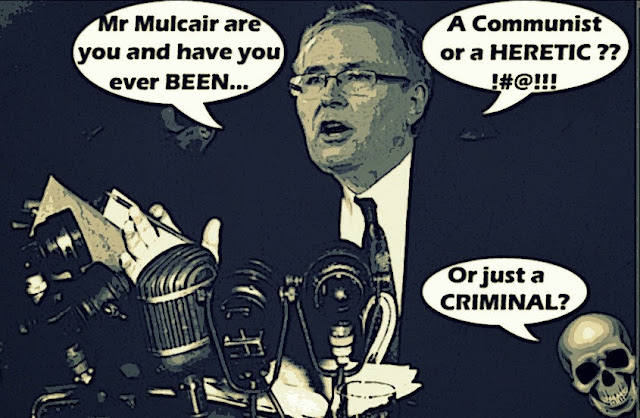 “I guess we underestimated the extent to which you are capable of making something out of nothing...If only you knew anything about statutory interpretation and the interpretation of documents.”

“Mr. Chair, I would appreciate it if Mr. Woodworth were to provide Anne McGrath, our party general secretary, with his address so we can share the fee of our attorneys. I thank him for proving our case for us.”

My favourite being this one:

Because that's all those foul Cons deserve eh?

Their War on Russia may have been short-lived, but their War on Canada and its values has gone on long enough... 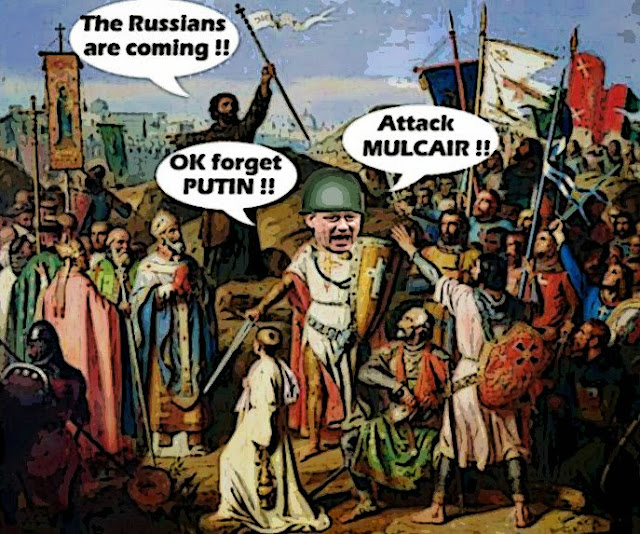 And it will probably get worse before it gets better, because there is a lot of talk out there about the possibility of an early election.

So we better be ready.

You know, tonight as I walked home from work, finally free from my crutches, I came across this amazing sight... 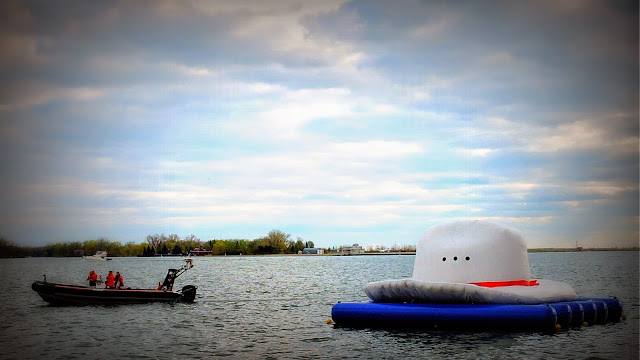 It's part of a campaign to encourage people to visit Alberta.

And it made me smile, and filled me with warm thoughts about our cowboy compatriots.

This is still an amazing young country, and we all deserve so much better.

Down with the bully Cons.

Have a great Two-Four Weekend everybody !!!!

Harper likes to talk tough, but he isn't touch. Putin, doesn't just talk tough, he is tough. Harper ought to have kept his mouth shut. All Putin did was ignore Harper. Like who exactly is Harper to Putin. There isn't anything Harper/Canada that Putin wants or needs. He has all the mineral wealth he needs. Canada may export to Russia, but we sure don't import much. So its more like we need Russia more than they need us. So Harper froze some of the Russian assets. Did he really think that was going to do much. Those frozen assets are just a bit of what the Russians own. Most of these Russians grew up in an atmosphere where only the very strong survive and get to the top. Harper is simply a middle class kid trying to make it in a Russian mob environment. Trust me, the guy won't last 5 minutes. Putin, personally could cold cock Harper within 30 sec. of getting into a room. No one in Russia pays any attention to Harper. The more Harper says, the sillier he looks.

Now as to Harper's attacks on Mulcair. Its simple. Mulcair made him look bad in the house of Commons and now it was get even time. Elections Canada had already said Mulcair had done nothing wrong. Of course bully boy harper thought they could put Mulcair on the ropes, but Mulcair is a product of the Quebec political scene, and again, he is much tougher than Harper. It may have made Mulcair look less than pleasant, but what do people expect? Given the Con's disgrace in the Senate, they really ought to give this thing with the NDP a rest. The Cons as usual are getting into a fight, where one is not necessary. But stevie feels threatened so off he goes with his gang. In the end stevie is going to look like an idiot. He might want to go back to bullying First Nations people and Veterans.

.. All Hat Harper .. our fierce Environmental PM (rebranding under construction) stands on guard for situational ethics, tailings ponds, military adventurism, secrecy & political opportunism .. Its all posturing and political screeching.. Tough on Crime and foreign despots and Palestinians... and what are his plans for that little Yorkie Terrier.. stealing his kibble.. or telling it to vote for Poilievre?

Its never been about Canada.. eh.. its always been about the greasy and mealy Evangilical Harper Brand, and untold billions of corporate subsidies.. pompous rhetoric spewing from dim MP's .. all served up lathered in a Paramountcy fairy tale funded by taxpayers..

I agree e.a.f. Putin may be a nasty boy but he is also a serious badass. The guy was K.G.B. while harpie was a fucking mailroom lackey. Russia is in a position to really hurt the amerikan economy by refusing to trade in dollars (China is in on this action too) and, if/when that happens, you will see the amerikan economy implode in a frighteningly short time. This whole "sanction" thing is just harpie sucking more Koch and trying to impress his amerikan masters.
A.M.F.!

I was in disbelief over this attack on Mulcair. Harper is the one and only Canadian PM ever, to be held in contempt of Parliament.

Harper is no Conservative either, he has no party. Harper is a fascist dictator and a control freak, from way back. Harper considers Canada as his, Thousand Year Fourth Reich.

The idea Putin fears Harper is laughable. Putin said, if he wants to speak to a country with power, he would speak to Obama. Putin also speaks to Angela Merkel. He speaks German and Merkel speaks Russian. Russian Sailors will be going to France to be trained on the war ship, France has built for Russia. Putin is going to China, to sign a deal for oil and gas. China and Russia are allies so, I can see China accepting Russia's oil and gas.

If Harper's mouth was a little bigger? He could get both of his big feet in it.

If Harper can't bully Putin, Mulcair will have to suffice. Somebody must pay attention to King Harper! He's super important!!

But Harper really wants war, he wants Canada to be embroiled in a war by the time the election rolls around so he can be our War Leader and proclaim now is not the time for change.

You wonder why Harper dislikes Putin so much. Its not like they are all that different. Harper is just a few years behind Putin when it comes to changing a country's democratic system to one of dictatorship. Of course, when it comes to dictators, Putin does it with a tad more style. What happened to Mulcair isn't that different the last time some one ran for Mayor of Moscow against one of Putin's candidates. Not only was their voter suppression in Moscow, but they made it next to impossible for the candidate to run an election. Oh, now I see what Harper is trying to do to the NDP. Make sure its not relevant to its constituents. Same play book for both boys, but Harper is just so seriously inept at it all.

hi e.a.f....yes Harper's whole Ukraine campaign is just a farce, designed like his entire foreign policy to win votes in Canada. And his attack on Mulcair is both a way to get back at him, and a way to make the opposition look as corrupt as him and his Cons. I don't really think it will work, but it does say something about how desperate the Cons are...

hi Mahmoud...yes I agree Harper is out of his depth, Putin must regard him as a real amateur, and his sanctions are a mile wide and a millimetre deep. You're also right that his sanctions were also an attempt tp please the Americans and improve the slim chances the Keystone pipeline will be approved. But luckily for us Obama hates Harper even more than he does Putin...

hi salamander....it is an insane spectacle isn't it? I was thinking of having the Yorkie Terrier say something about the situation, but I then I realized it WAS Poilievre, and we've heard enough from him... ;)

hi anon...12:54 pm...yes the attack on Mulcair really was beyond belief, the first time that has ever happened, and an absolute disgrace. And I understand that the Cons are going to keep up that charade so that sort isn't over yet. But the good news is that they are only making themselves look bad, and giving Mulcair a chance to shine...

hi Noah...if you check out Harper's Twitter feed these days you would think the Third World War had already started because it's all about the military. And it won't be long before he starts cranking up the 100th anniversary of the start of the First World War. It's all phony patriotism designed to conceal the fact that he's selling us out to foreign interests, but I like to think that it reflects his desperate state of mind. The voices in his head are fighting themselves, and its a scary sight... ;)

You are right! It has happened Russia and China signed a contract. $ will loose it value